The mother of three-week-old girl who is believed to be the youngest person in Britain to recover from coronavirus was left in tears after being surprised by the ‘hero’ NHS staff who treated her daughter.

After being cared for in an incubator in the neonatal unit, Peyton tested positive for coronavirus in April – despite not having any symptoms, However last week after two negative tests, Peyton was able to go home with parents Tracey, 27, and AJ, 28.

Appearing on Good Morning Britain today, the family were given a message from the staff who saved her baby’s life, who told her it was a pleasure’ to look after them, and that they couldn’t wait to meet baby Peyton after lock-down. 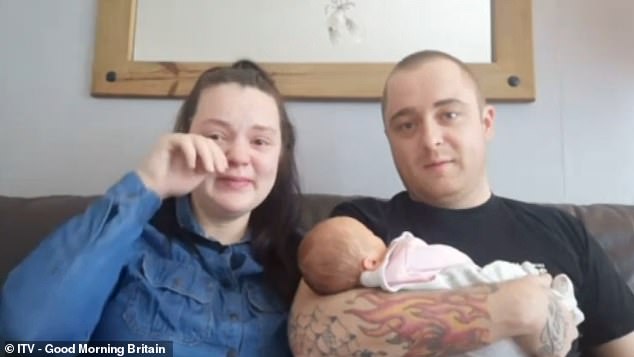 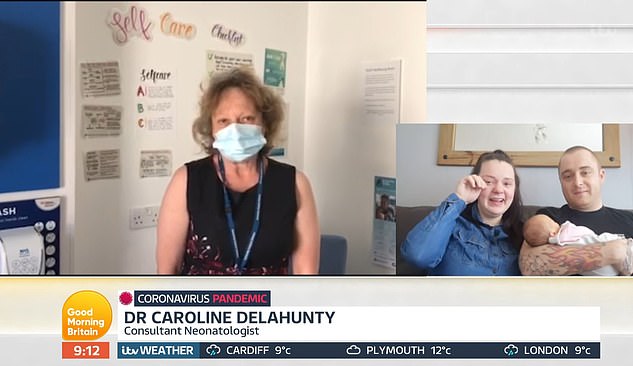 Mother Tracey was left in tears after being surprised by the ‘hero’ NHS staff who treated her daughter. Pictured left, consultant neonatologist Dr. Caroline Delahunty

Speaking of her diagnosis, dad AJ said: ‘Tracey was crying. They confirmed she had coronavirus and it was mind numbing. It was a very dark time, but she’s absolutely fine now.’

He went on: [The NHS] ‘They’re the real soldiers, they always have been. People are just realising it.

‘They have to go and risk their lives and their families and I cannot thank the medics enough, they’re the real heroes in the world. There’s nothing, there is no gift that can repay what they’ve done.’

Tracey became emotional as host Lorraine Kelly announced that community midwife Sandra Coombes, Dr. Caroline Delahunty and nurse Laura Lang had a message for her and her family. 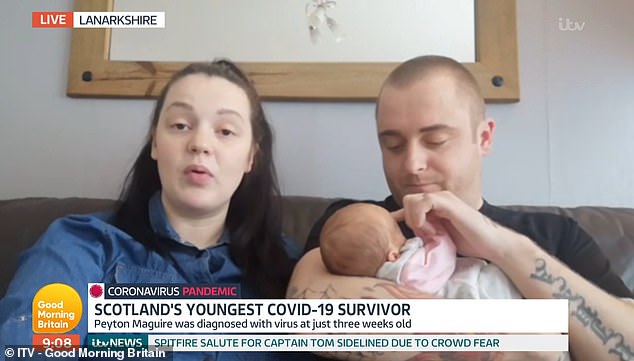 Peyton was born eight weeks premature, weighing just 3lbs 5oz and was delivered by C-section at University Hospital Wishaw after mother Tracy was diagnosed with pre-eclampsia

Sandra said: ‘It’s lovely to know you’re home and well, it was absolute pleasure looking after you. I can’t wait to meet wee baby Payton when we’re all well and good again.’

As Tracey was left wiping away her tears, Dr. Caroline added: ‘Tracey, AJ and Peyton, it’s just to say we’re all thinking of you these are difficult challenging times.

‘Treasure each moment you have with Peyton and remain positive and thank you very much for all the feedback we’ve received from you.’

Nurse Laura added she was ‘so pleased’ the family had managed to recover.

Peyton was first diagnosed after being tested for a range of viruses when she developed a sniffle, and Tracey told she was completely overwhelmed after being told of the diagnosis. 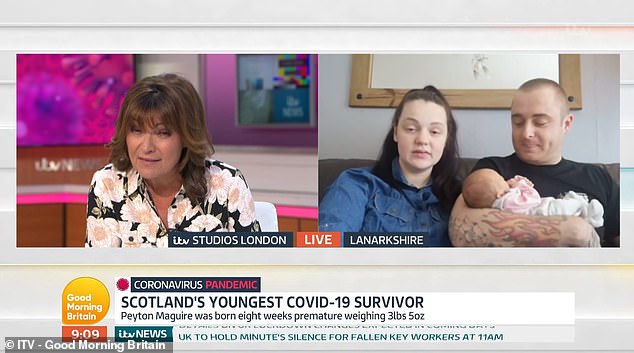 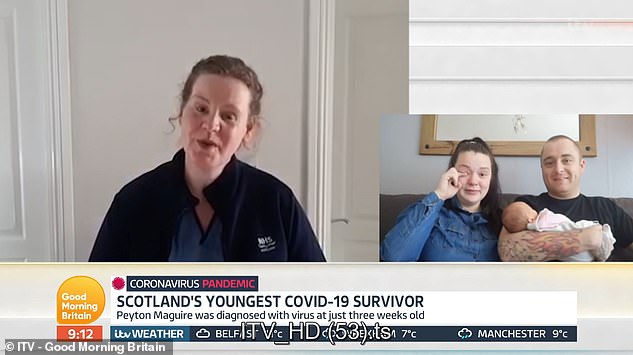 ‘When I heard Peyton had coronavirus I was sobbing, said Tracey, ‘And really worried about how it could affect her respiratory system, her lungs and if it was life-threatening.

‘She’d had a sniffle, which is why they’d tested her for a range of viruses including Covid-19.

‘We were told we’d have to stay away from Peyton for 14 days and isolate at home, but I pleaded not to be apart from my baby for that long. 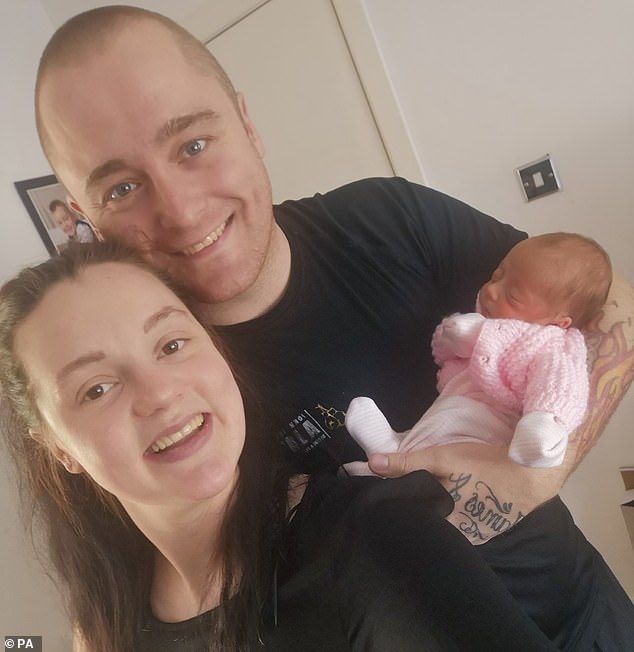 Peyton was first diagnosed after being tested for a range of virus when she developed a sniffle, and Tracey told she was completely overwhelmed after being told of the diagnosis. The family are pictured following Peyton’s recovery

‘The staff kindly agreed I could to isolate with her in the hospital while AJ stayed at home.’

She added: ‘Watching the staff at work was incredible.They put their lives at risk to make sure my baby was getting fed and cuddled. Even wearing their PPE, they were determined to hold her.

‘Peyton is the most precious person in the world to me and it shows the trust I had in the midwives and the other staff that I put her care in their hands – because that is that they are trained to do.’