Passing of the guard: Vixens playmaker aims to give retiring shooters fond farewell

Melbourne Vixens have been the dominant side this Super Netball season and Saturday is their chance to extend that dominance into the finals.

The Vixens sealed top spot with two games left in the season and can lock in a place in the grand final with a win over Sunshine Coast Lightning on the Sunshine Coast in the major semi-final.

With the whole season being played in Queensland, the Lightning will play at home despite being the lower-ranked team. 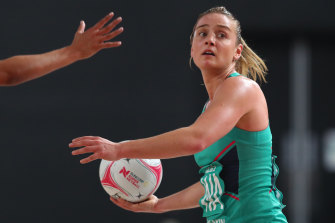 The Vixens want to send off two of their veteran teammates with a title as goal shooter Caitlin Thwaites and goal attack Tegan Philip will retire at the end of the season.

Vixens playmaker Liz Watson has led Super Netball in goal assists this season with 303, 37 assists ahead of her nearest rival, as Malawi shooter Mwai Kumwenda, Thwaites and Philip have shuffled between the two shooting roles.

Thwaites will retire after 18 seasons of elite netball and Philip departs after 11 seasons; both have played for Australia and won titles with the Vixens but they have locked in on completing the season since the announcement earlier in the week.

"They are really focused on having a good finals series and finishing off their careers," Watson said.

"We just want to send them out on a high as they have been fantastic for the Vixens and for the sport of netball.

"They deserve to have a really good end to their playing career."

Watson, who returned from a nasty ankle sprain to play half of last week's game, said her side's three-pronged attack had proven a weapon all season and her side would continue to play the game on their terms in the finals.

"A big message for us is to play like we like to play, not worry about what they are going to do but if changes do come then we need to change it up from our end," Watson said.

"It makes my life a lot easier and it's been great for the whole group that they can all change around as they are all very different players. It keeps us guessing and it keeps the opposition guessing.

"I'm loving it, especially with Mwai Kumwenda, our connection has been really good. I'm glad our work is paying off and they are getting those goals in so those passes count as goal assists.

"We are seeing the old Mwai, the one that flies up, gets up and about and is vocal. She's a real confidence player and when she is playing well and feeling good we see her at her best."

The Vixens have handled their season in Queensland well so far but were held up in school holiday traffic last week while driving from their base in Brisbane to the Sunshine Coast, with traffic and roadworks adding at least 40 minutes to a bus trip that usually takes 75 minutes.

Just as they have done all season, Watson has backed her side to update their plans and use the experience to do things better this Saturday. Watson also expects to play the full game despite still feeling her ankle at times.

"It is getting better and I'm ready to play the full game," Watson said.

"Winning makes everything feel better, I won't even feel it."