Paws of steel: why a big dog’s gotta dig

It’s your dog Clancy here, writing from the city. Given the constant rain, it’s hard to create a festive mood in a household, but I find that digging a big hole in the lawn is the key. The impact is incredible. Man goes completely nuts.

This, curiously, is a wonderful thing to behold. There are times when I wonder if I am at the centre of their world particularly when their tiny grandson comes over to visit. The recent drama about my digging, however, put my mind at rest. 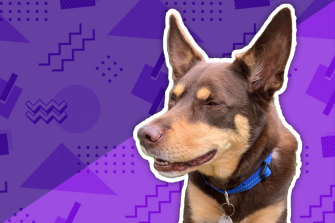 From the moment Man saw what I’d done, the world contained nothing but me, him and the hole around which we were gathered.

“The hole is in the middle of the lawn, Clancy,” Man said. He pointed at it as if I might need assistance perceiving its placement. I felt like saying: “Mate, I dug the thing. I think I know its location”.

“And look at the size of it,” he said, which also seemed an unnecessary observation, given the information was being offered to the engineer responsible. The creator of the crater, if you will.

Man then held up his hands to the heavens, as if to beseech intervention from the Almighty. It was like watching a bad amateur production of a play by Sophocles.

“Oh, how could you do this?” he said. He was keening, like someone at a funeral. He turned to the house and shouted through the back door.

“He’s done it again,” he complained to Lady, “just after I managed to get the other one to grow over.”

I felt like pointing out the obvious. The only reason I had to dig a new hole was because of the way he dealt with the old hole. He’d filled it in and then installed a banana lounge over the damaged area to prevent my further access.

Worse, he’d complimented himself on his ingenuity. “I’m putting the banana lounge over the hole,” he’d said to Lady, “so Clancy can’t get to it.”

The obvious result: I was forced to commence excavations elsewhere.

Adding urgency to the matter was the need to bury a soft toy that I’d confiscated from the aforementioned grandson, Pip. He’s a cute little thing, but I’m worried they might be spoiling him. He’s only 16 months old but already has a toy tiger, toy koala and toy rabbit.

That’s one toy too many! Who wants a spoilt brat in the family? Hence, my decision to remove the tiger from the mix and prepare a hole for its safe storage.

Later, I strategised, if little Pip kept me supplied with toast, I might return the tiger to his possession. Sure, it would be covered with dirt, but I think that adds allure to a soft toy.

Thus the deep hole, the existence of which was still exercising Man’s attention. He dropped onto his hands and knees and tried to rake the soil back into the pit. It was then that he looked into the depths of the excavation and saw an orange paw sticking out.

He grabbed the paw and pulled it upwards.

We were back to the badly acted scene from Sophocles. “Clancy! This is Pip’s Tiger. You’ve stolen his toy. You’ve given it burial under cover of darkness.”

It was Antigone and Polyneices all over again. A proper burial had been condemned by an unfair world. There was no mention of my desire to help a child overburdened with toys, nor my intention to return the toy in due course if bribed with toast.

“This dog,” Man shouted to Lady, “is half wolf and half wombat. He has paws of steel. He is a digging machine the likes of which Andrew Forrest can only dream.”

After a few minutes of this, I was glowing with pride. Half-wolf and half-wombat, you say? Paws of steel? It was good to finally have my talents acknowledged.

Man brushed the dirt from the tiger. He then dug around in the hollow and located the tail, which appeared to have come loose during the process of burial.

This was an expression I’d heard before but frankly never understood. I spend every night in the doghouse. It’s indoors, and quite comfortable. It even has a mattress. It’s no good threatening me with a night spent at home.

In fact, that night I slept particularly well, comfortable in my usual quarters, my mind full of dreams of myself as a super-hero – swift like a wolf, but powerful like a wombat = using my skills for the cause of good.

The next day, Man filled in my new excavation and moved the banana lounge so that it now sits astride the fresh diggings.

This means the banana lounge is no longer protecting the site of my previous excavations, a location I preferred. That area now sits there, unprotected, beckoning my paws of steel.

Progress? I think so. Hope all is well in the country,

A cultural guide to going out and loving your city. Sign up to our Culture Fix newsletter here.

To read more from Spectrum, visit our page here.