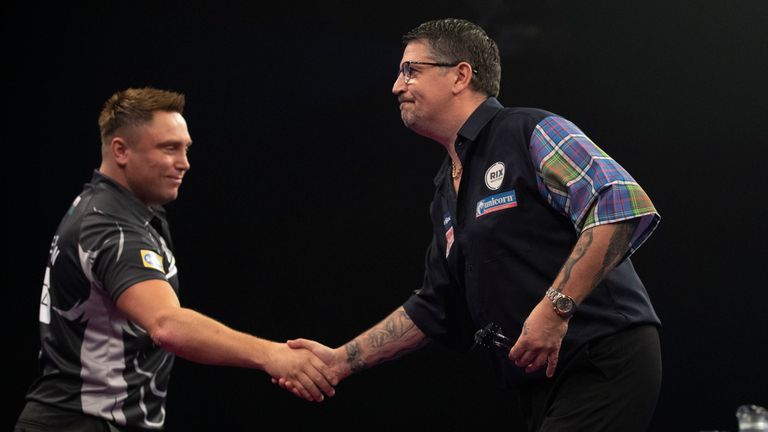 Following 15 days of darting drama, it all comes down to this. 96 players came, now only two remain. Gary Anderson and Gerwyn Price will lock horns for the biggest prize in the sport in Sunday’s World Darts Championship final, and it promises to be a classic.

Neither player will require further incentive as they bid to create their own slice of history, but there are a series of fascinating sub-plots that will only add to the spectacle.

Anderson’s victory over Dave Chisnall saw him draw level with Michael van Gerwen and Dennis Priestley in terms of PDC world final appearances, but he is bidding to usurp his late, great countryman Jocky Wilson, by scooping a third World Championship crown.

Anderson vs Price – The Stats

Price has already broken new ground courtesy of his run to a first world final, but he will become just the tenth different world No 1 in PDC history with victory over ‘The Flying Scotsman’.

The pair’s contrasting demeanours also adds to the intrigue. Anderson’s nonchalant attitude to the sport has been integral to his success over the past decade, whilst Price thrives on intensity and has conceded he may ‘want it too much’.

However, make no mistake, the Scot will be desperate to avenge his contentious 2018 Grand Slam defeat against Price, having failed to land an individual major title since then.

Will ‘The Iceman’ keep his cool to fulfil his darting dreams, or can Anderson add another famous chapter to his glittering story?

Join us from 7:30pm on Sky Sports Darts & Main Event to find out… 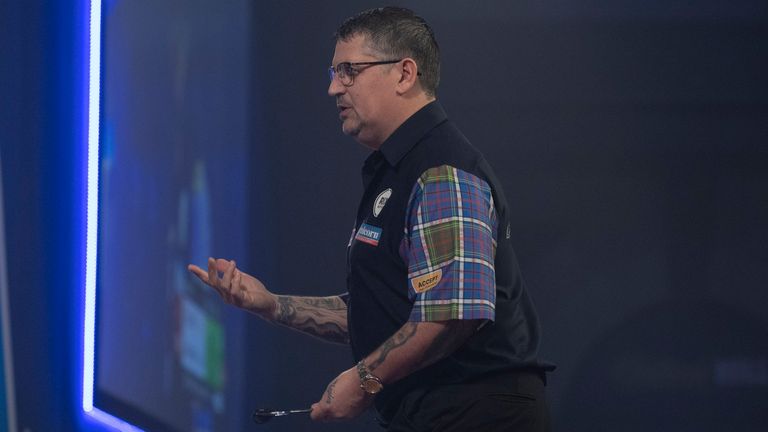 Anderson’s route to the final

Anderson has advanced to a fifth PDC world final despite failing to hit top gear for large periods of the event, which is testament to his ability and mental fortitude.

The two-time world champion battled past Madars Razma in a scrappy opener, before coming from 3-2 down to defeat Mensur Suljovic in a controversial clash, which generated headlines for Anderson’s post-match comments, rather than his performance.

That victory appeared to galvanise ‘The Flying Scotsman’, who followed up a whitewash win over Devon Petersen with an emphatic 5-1 victory over Dirk van Duijvenbode, featuring his first ton-plus average in 19 matches.

Anderson offered a critical assessment of his 6-3 victory over Chisnall, yet he appeared in control throughout, averaging 100 and firing in 13 maximums to maintain his bid for a third world title. Price’s route to the final

Price is the first Welshman to reach a PDC World Championship final, although the world No 3’s progression has been anything but serene, despite navigating his way through without meeting a top-10 player.

Having seen off his compatriot Jamie Lewis in a hard-fought opener, Price battled past an impressive Brendan Dolan in a dramatic last-leg decider, before producing a professional display to dispatch a resurgent Mervyn King.

‘The Iceman’ was feeling the heat until defying a late onslaught from a spirited Daryl Gurney to come through another last-leg shootout in the quarter-finals, which was followed by a historic victory over Stephen Bunting.

Price averaged 100.92 and converted a record-equalling eight ton-plus checkouts as he recovered from 3-1 adrift to defeat ‘The Bullet’, and he’ll take encouragement from producing his best darts when he’s been embroiled in pressurised affairs. 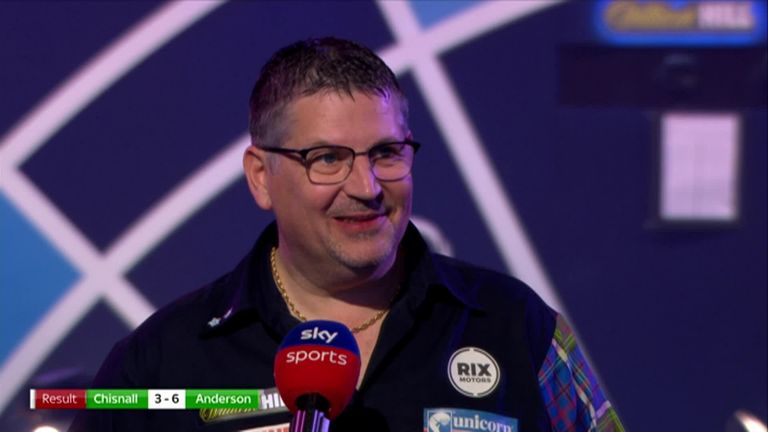 “I’ve said it before – the last two years I’ve come here with no expectations whatsoever and I might I have pinched it all the way to the final, but we’ve got here. That’s not bad.

“To be honest, I was looking at a Bunting vs Chizzy final – the way they have been playing. It needs to be a lot better. We need to buck up the ideas. We’ll just get up there.

“I’ve always said it and I’ll stick to my point, I just want to play darts. If the boy turns up and smacks you off the board, shake his hand and say: ‘Well done, all the best’. It’s all you can do.” 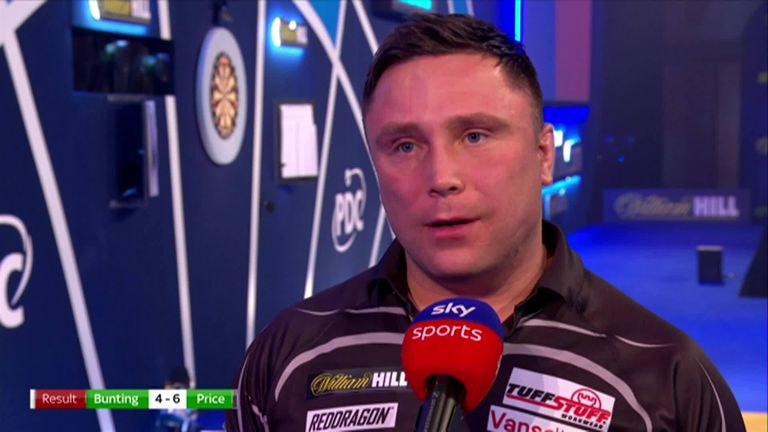 “I’m here to win this tournament. I’ve got to the final and I’ve got every chance of winning this now.

“It is going to be a really tough game, but after that game, I’m full of beans and full of confidence.

“I think that the better someone plays against me, the better I play. There’s a lot more [left in the tank]. Gary likes a good flowing game and I’m just concentrating on my own game now. If it’s enough, it’s enough. I pray it is.” 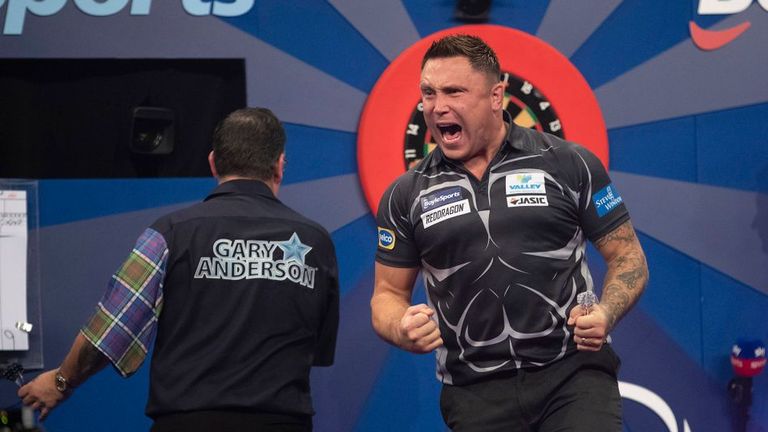 The pair have no shortage of history, having contested arguably the most controversial final in darting history at the 2018 Grand Slam – the scene of Price’s maiden televised title.

The Welshman has enjoyed a remarkable rise since, and victory over Anderson in Sunday’s showpiece would see Price go full circle and become the new world No 1 – ending Van Gerwen’s seven-year monopoly at the summit.

Anderson boasts the slender advantage in terms of the pair’s head-to-head record, having won eight of their 14 clashes, including two of their three meetings in 2020.

Nevertheless, Price ran out a comprehensive 7-1 winner in their last outing back in August, and the 35-year-old has claimed the spoils in both of their tussles at major ranking tournaments. John Part: “I’m leaning towards the Price side. I don’t know if stamina is an issue for Gary, Price probably has the edge on that side of things.”

Stuart Pyke: “I think experience wins the day, and I think Anderson wins it 7-5.”

Watch Sunday’s thrilling conclusion to the World Darts Championship, live on Sky Sports Darts from 7.30pm. Check out daily Darts news on skysports.com/darts, our app for mobile devices and our Twitter account @skysportsdarts