People are giving themselves 'stick-and-poke' tattoos during lockdown

With salons closed across the country, many people are adopting a ‘do it yourself’ approach to beauty treatments.

But while cutting or dyeing your own hair is unlikely to have long-term catastrophic consequences, giving yourself a tattoo is considerably more risky.

Since lockdown was imposed, stick-and-poke tattoos, which involve dipping a needle in ink before inserting it repeatedly into the skin by hand, have become increasingly common among inking enthusiasts all over the world.

The old-fashioned method has seen a resurgence in popularity over the last decade or so, and it can be used for anything from simple, small tattoos to more intricate designs. 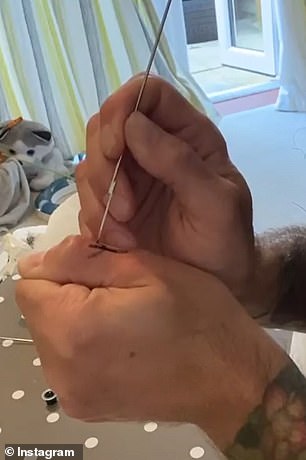 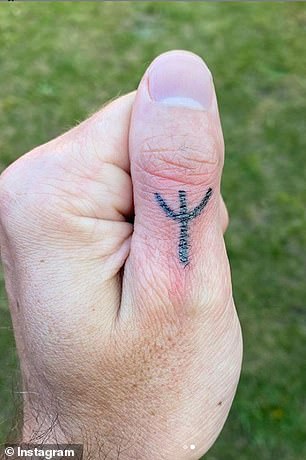 Since lockdown was imposed, stick-and-poke tattoos, which involve dipping a needle in ink before inserting it repeatedly into the skin by hand, have become increasingly popular among inking enthusiasts

Some ink fans even claim that it’s less painful and may heal faster than the standard electric method, though it can take considerably longer and requires the same level of sanitisation as any electric tattooing.

Many people, including 18-year-old model Kaia Gerber, have taken to social media to show off their lockdown designs, which range from casual doodles to more artistic etchings.

But a skin expert has warned against the trend, urging people to resist the desire to tattoo themselves and wait to have one done by a professional in a sterile environment.

Dr Faheem Latheef, an accredited consultant dermatologist based in Leeds, told FEMAIL: ‘During the lockdown many people are resorting to various activities, including stick and poke tattoos, to keep themselves entertained. 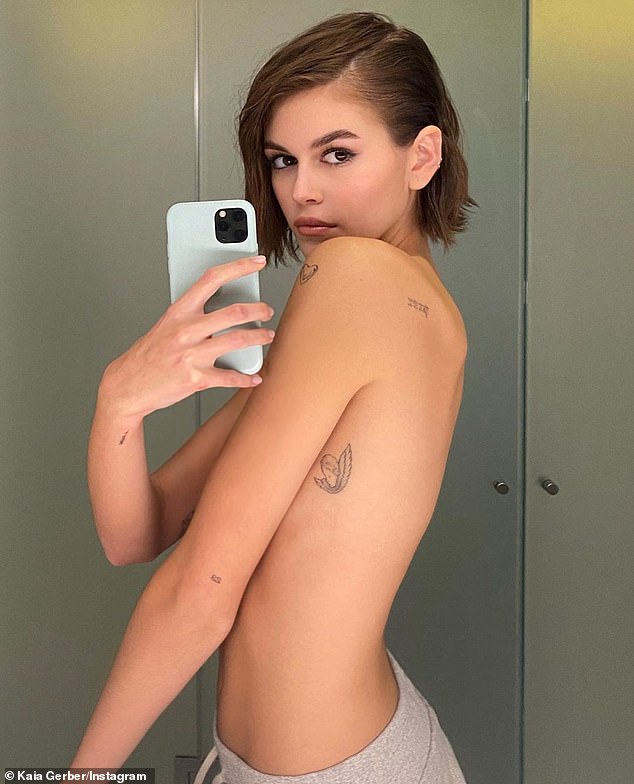 DIY job: Kaia Gerber, 18, admitted to Glamour on Thursday that she resorted to giving herself a manual stick and poke tattoo while self-quarantining

‘However, this does come with significant risks when done at home and without previous training or experience.’

Due to the breach in the skin integrity, Dr Latheef warned there are a number of possible complications that can arise.

‘As with any procedure that breeches the skin, infection is a major concern,’ he said.

‘This is particularly worrying for home use, as there is no reliable way to ensure the needle used is fully sterilised and would put you at risk of infection from multiple types of organisms including bacteria, viruses, and fungi. 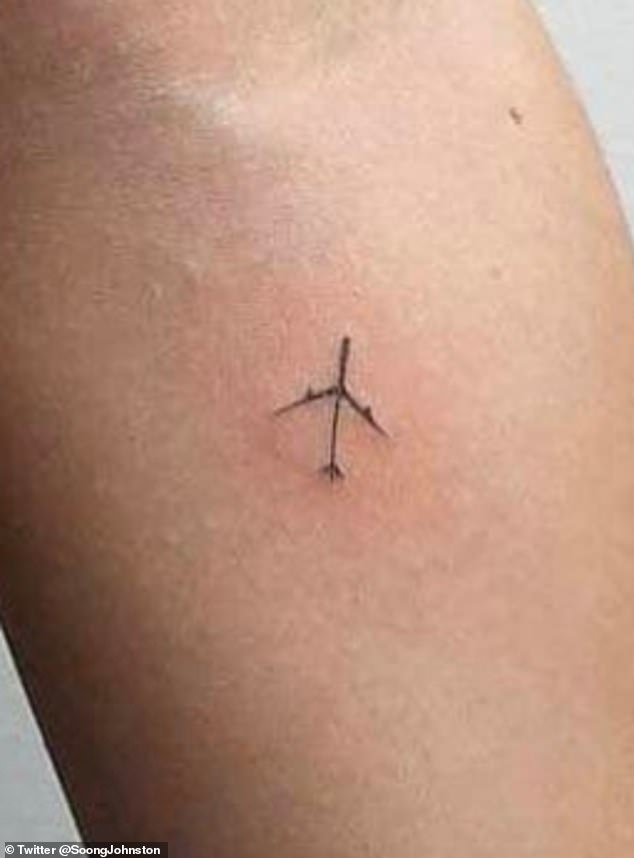 Due to the breach in the skin integrity, Dr Latheef warned there are a number of possible complications that can arise. Pictured: a DIY stick and poke tattoo

‘Furthermore there are some bacteria that reside on your skin normally, called staphylococcus aureus, that typically cause skin infections in people with eczema where the skin barrier isn’t working well, but which in this scenario can penetrate the skin barrier through the needle points and cause a superficial skin infection called erysipelas, or a more deeper cellulitis sometimes even requiring intravenous antibiotics from hospital – something you would probably really want to avoid at present.

Inserting needles into your skin without previous training or knowledge of anatomy would put you at potential risk of piercing a blood vessel, Dr Latheef warned. 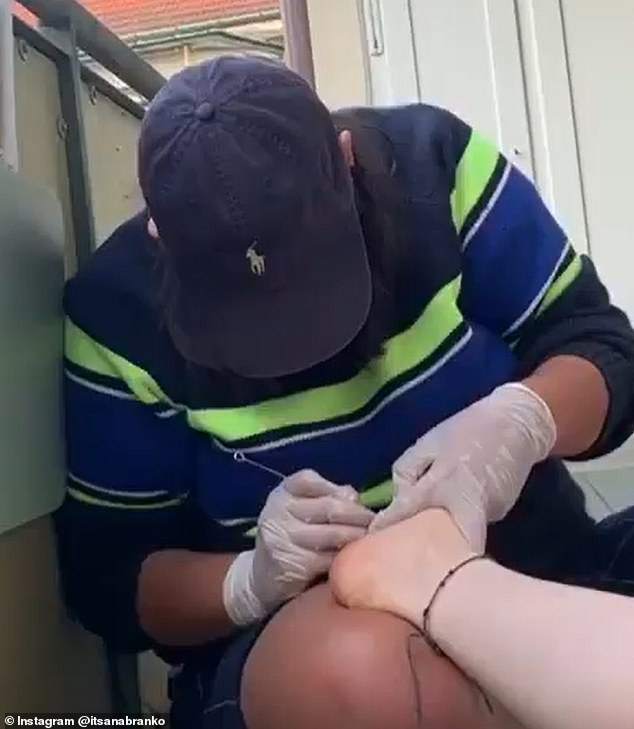 Inserting needles into your skin without previous training or knowledge of anatomy would put you at potential risk of piercing a blood vessel, Dr Latheef warned

‘Depending on the type and location of the vessel, this could result in uncontrolled bleeding and a visit to hospital,’ he said.

‘If you take medications that increase your risk of bleeding such as (aspirin, ibuprofen, warfarin, clopidogrel) then this risk is even greater.’

‘As a dermatologist with an interest in allergy, I frequently get referred patients with suspected allergic reactions to tattoos for allergy testing,’ Dr Latheef said.

‘Traditionally the ink pigments used were derived from metals and we were able to confirm the culprit allergens on type of allergy testing called patch testing. 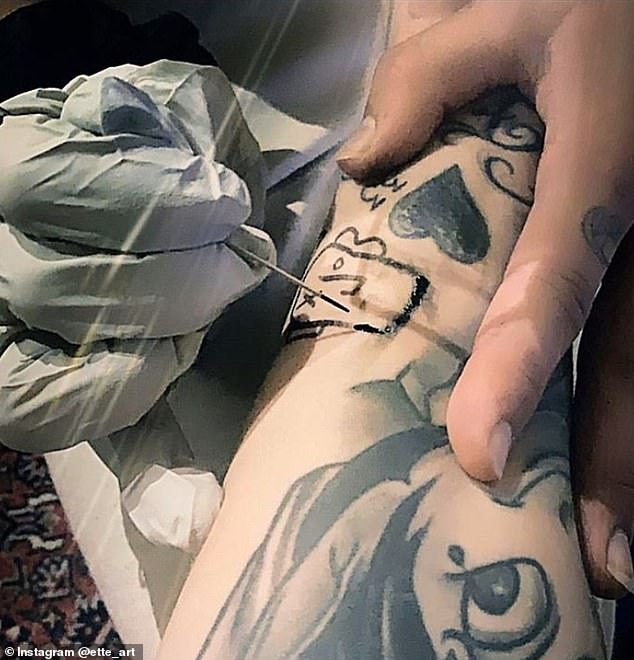 ‘Some of the newer tattoos tend to use newer materials and the allergy can be harder to confirm on testing. Some people also develop allergies to the topical cream or anaesthetics sometimes used with tattooing.

‘Non-specific hypersensitivity and foreign body reactions are also frequently encountered. Typically with these reactions they can take a few days to develop and are often itchy and red.’

Some people are more prone to getting an abnormal scarring reaction to anything that penetrates the skin barrier.

This could be surgery – commonly seen with C-section scars or moles removed on the shoulders or other high risk sites – piercings, acne scars, picking spots and with tattoos.

Dr Latheef warned: ‘These can result in hypertrophic or keloid scars which are raised and sometimes itchy and tender and also tend to take a long time to develop, sometimes weeks to months after the initial event.’

Flare of an existing skin condition

Certain conditions, such as psoriasis and more rarer conditions such as sarcoidosis, can present with tattoo reactions, according to Dr Latheef. 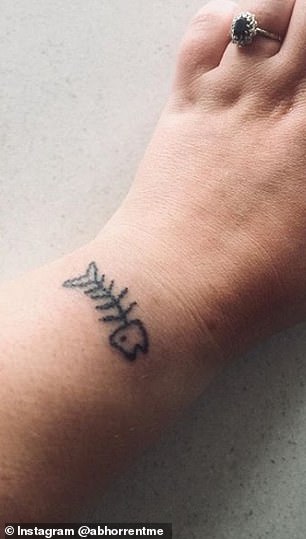 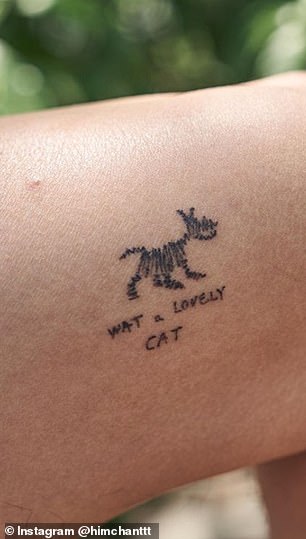 ‘In the case of psoriasis this is frequently seen at sites of pressure (under a waistline, watch strap) or at previous sites of surgery where the psoriasis flares at these sites something referred to as the koebner phenomenon,’ he said.

‘This is also commonly seen at tattoo sites.’

This is where the ink is deposited at the wrong layer of the skin due to poor technique resulting in the ink spreading at various levels causing a blurry, non-coherent and poor appearance.

‘Patients are often referred in to us for consideration of laser treatment for tattoo removal where they are unhappy with the appearance they have been left with and it can be challenging to correct,’ Dr Latheef added. 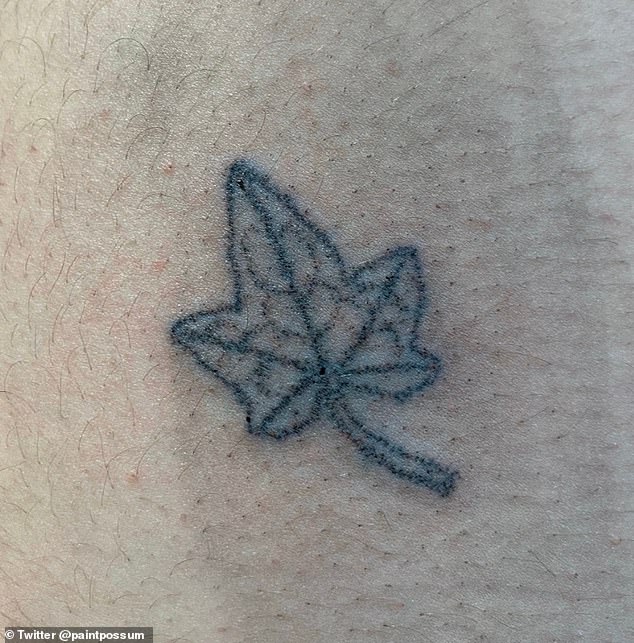 Some ink fans even claim stick-and-poke tattoos are less painful and may heal faster than the standard electric method. Pictured: a DIY attempt