Photographer snaps herself across the globe wearing traditional dress

She’s got the art of taking pictures sewn up! Photographer snaps herself in countries around the world wearing their traditional costume – and the results are incredible

This photographer dresses to impress.

Anita Demianowicz travels the world seeking out incredible landscapes and takes amazing images of herself wearing that region’s traditional costume.

The 39-year-old from Poland started the project eight years ago as a way of adding a human element to her photographs of epic landscapes. She takes her pictures by setting up her camera on a tripod and jumping in front of it while a self-timer takes care of the shutter release.

So far, she has snapped herself wearing a traditional outfit in a stunning Provence lavender field, amid the snow on Norway’s mesmerising Lofoten archipelago and on the Isle of Skye, wearing classic tartan.

She told MailOnline Travel: ‘This is the difficulty of the project. Not only do I have to find a beautiful place to take pictures and go there at the right time, but I also have to source an outfit and take pictures of myself. Nevertheless, this project is a way for me to pay tribute to the beauty of a country and its culture.’

Scroll down to be taken around the world, one outfit at a time… 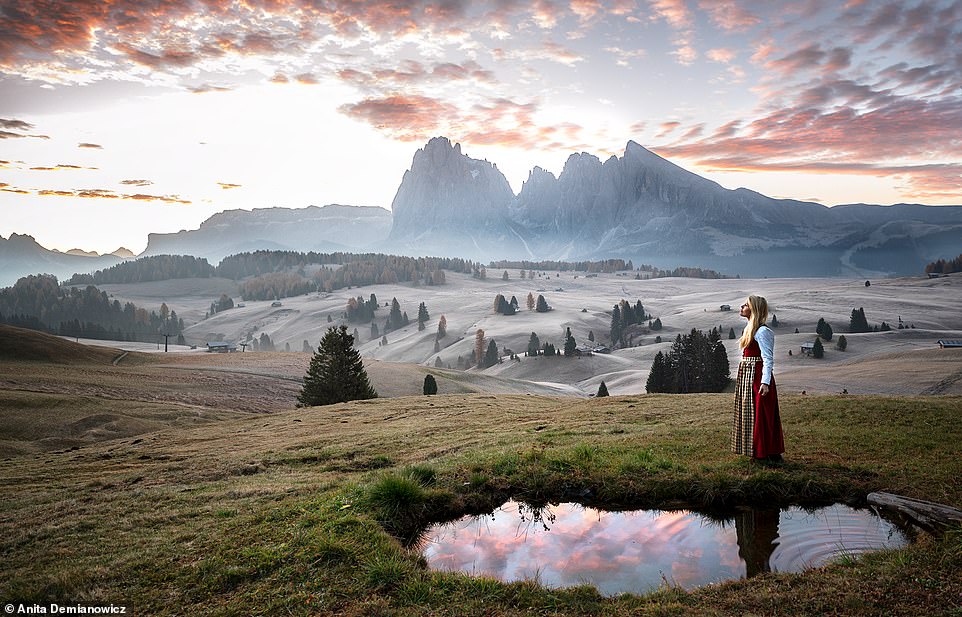 Anita captured this jaw-dropping scene in the Italian Dolomites’ extraordinary Alpe di Siusi alpine meadow. She told MailOnline Travel that it’s not always easy to source traditional costumes and has to contact tourist boards, embassies and costume rental shops to find them 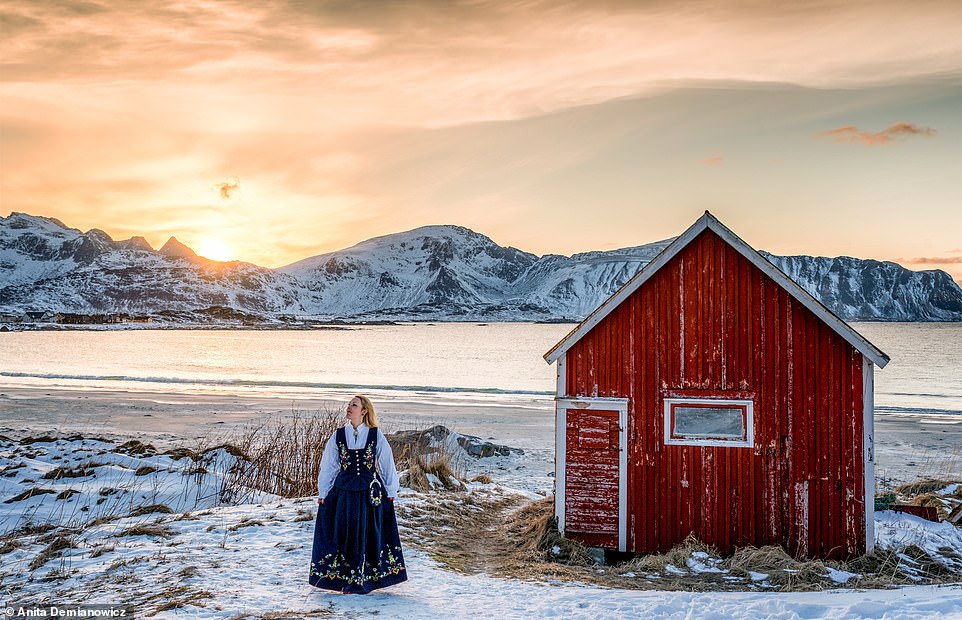 This incredible shot, taken in Norway’s Lofoten archipelago, was one of the most difficult for Anita to capture. She explained: ‘In Norway, it was winter, so parading around in a dress in the cold was not the most comfortable. Of course, I paid for it by becoming ill and needing antibiotics’ 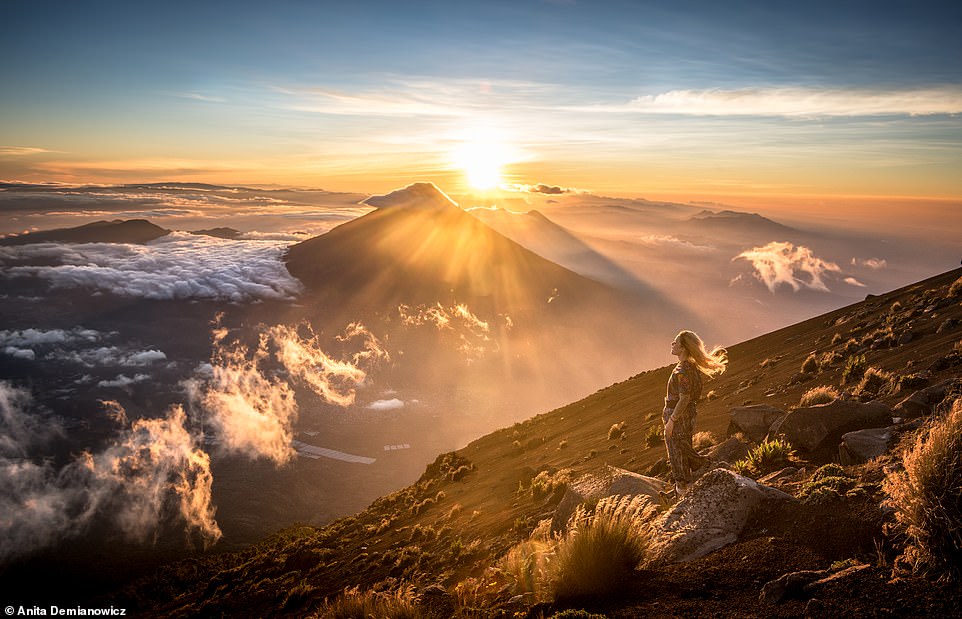 Anita is wearing traditional Mayan dress in this breathtaking image of the sun rising over Guetamala’s Acatenango volcano. Anita says a lot of hard work went into this shot and explained: ‘To take the picture I had to climb a volcano almost 4,000 metres (13,044ft) high with a backpack weighing over 20kg. At sunrise, it was really cold and everybody was in jackets and hats while I was barefoot in my Mayan costume’ 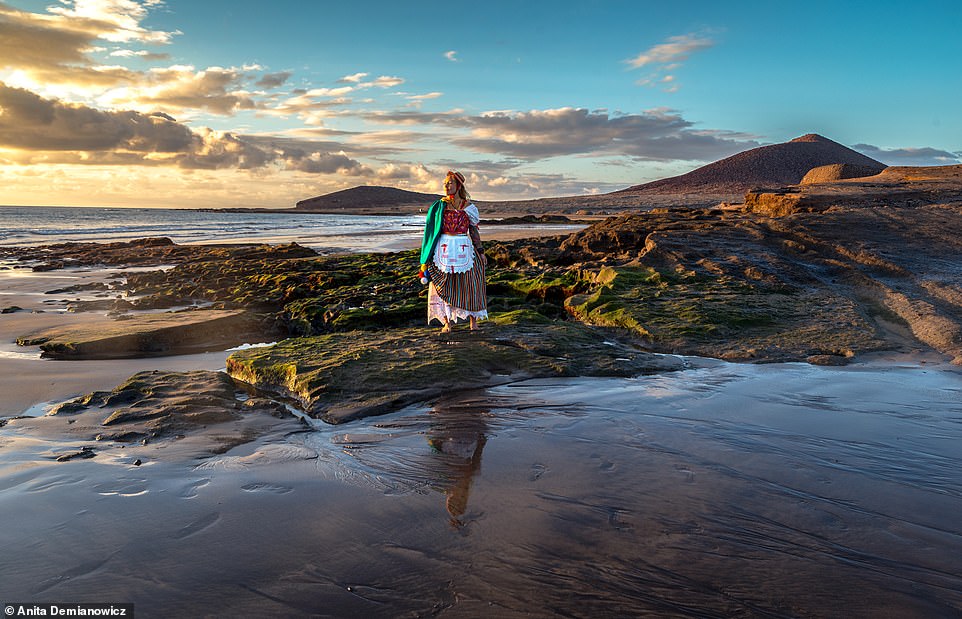 Anita said: ‘This project is a way for me to pay tribute to the beauty of a country and its culture.’ Here she is pictured on El Medano beach on the island of Tenerife, with the Montana Roja volcano in the background 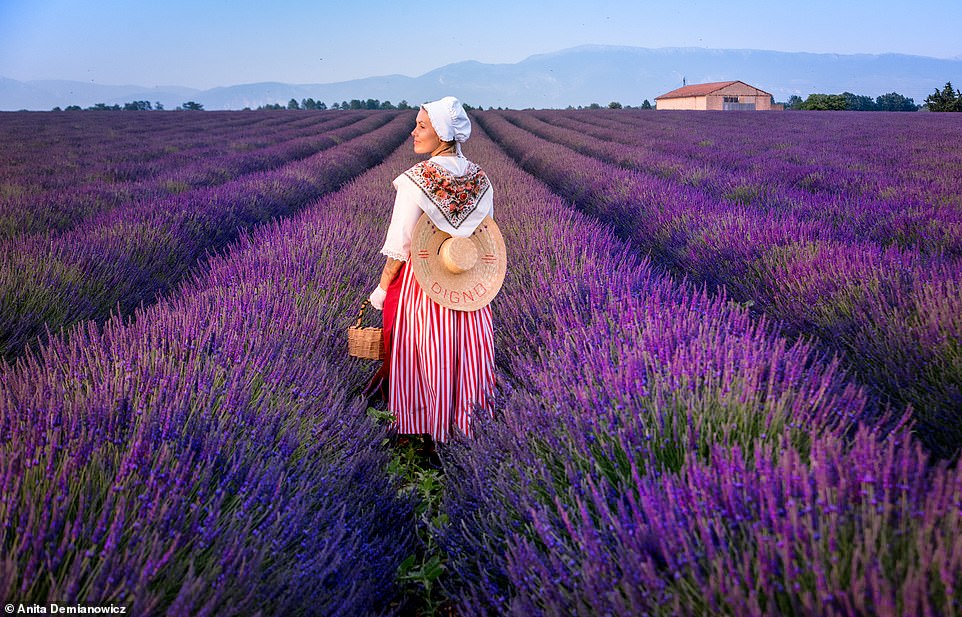 Anita poses in traditional dress in one of the lavender fields of Provence. She said: ‘I take pictures for the project in places I travel to, whether that be for work or a vacation’ 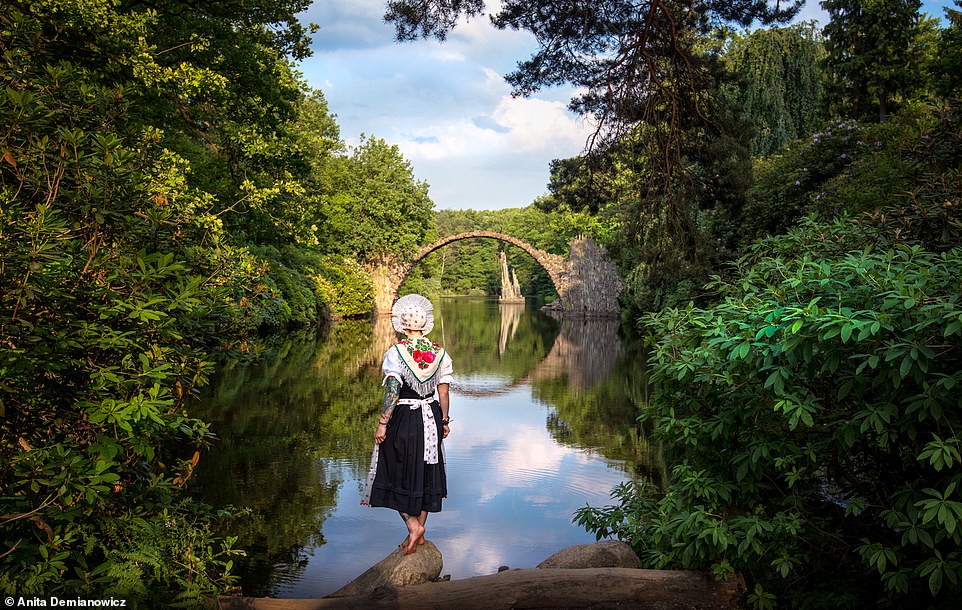 An amazing shot of Anita in front of the famous Rakotzbrücke Devil’s Bridge in Kromlauer Park, Germany.  It was built so that when the bridge is reflected in the water, it looks like a perfect circle 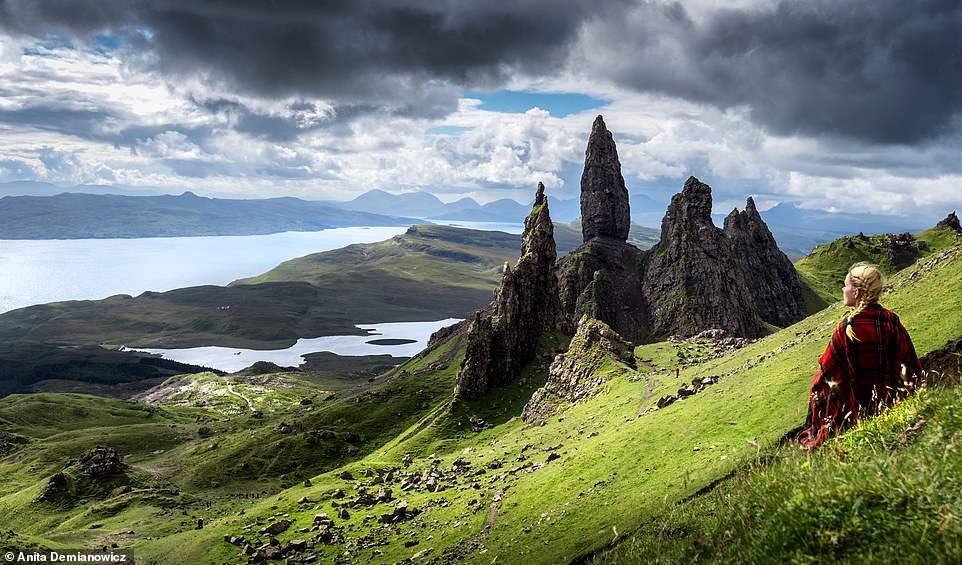 Anita wears classic tartan in this breathtaking shot of the Isle of Skye’s epic terrain. She said: ‘The most important thing in this project is that the human only shapes the image. This project is not a story about a man or culture of a region. I want to focus on the landscape’ 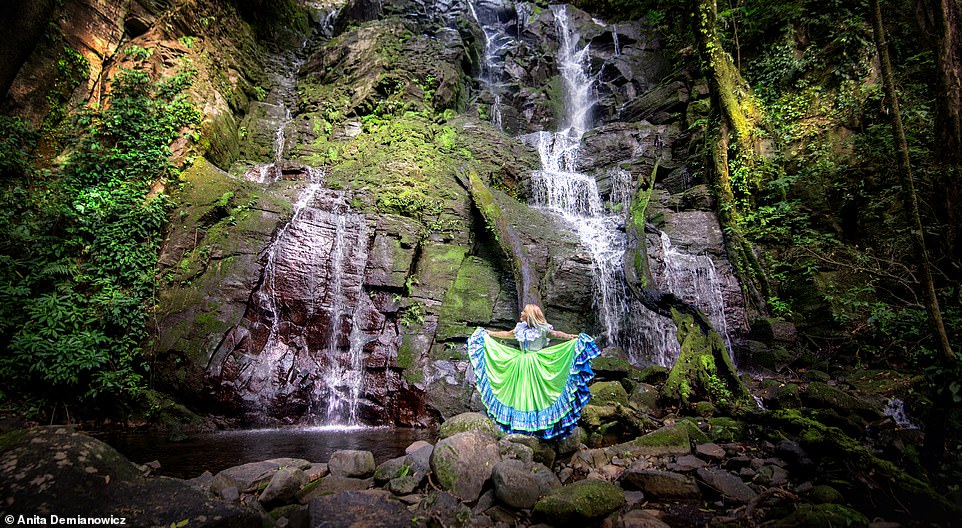 This serene shot was captured next to a waterfall in Costa Rica’s Rincon de la Vieja National Park. Anita borrowed the dress from a local after seeing her wear it at a festival. Anita offered the woman a photoshoot with her partner by way of a thank you 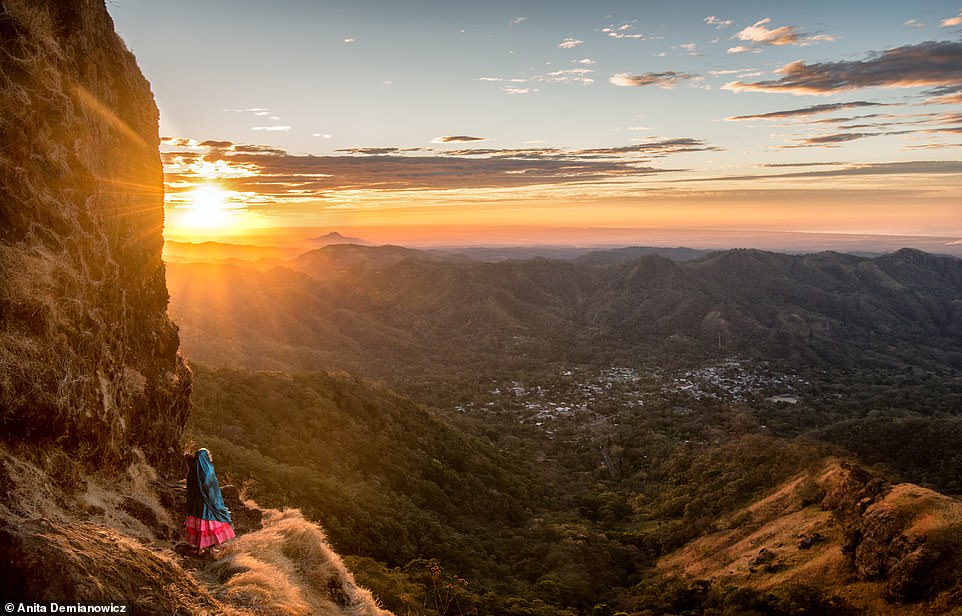 This jaw-dropping shot shows the view from Devil’s Door, a rock formation covered in foliage in El Salvador that is popular with tourists 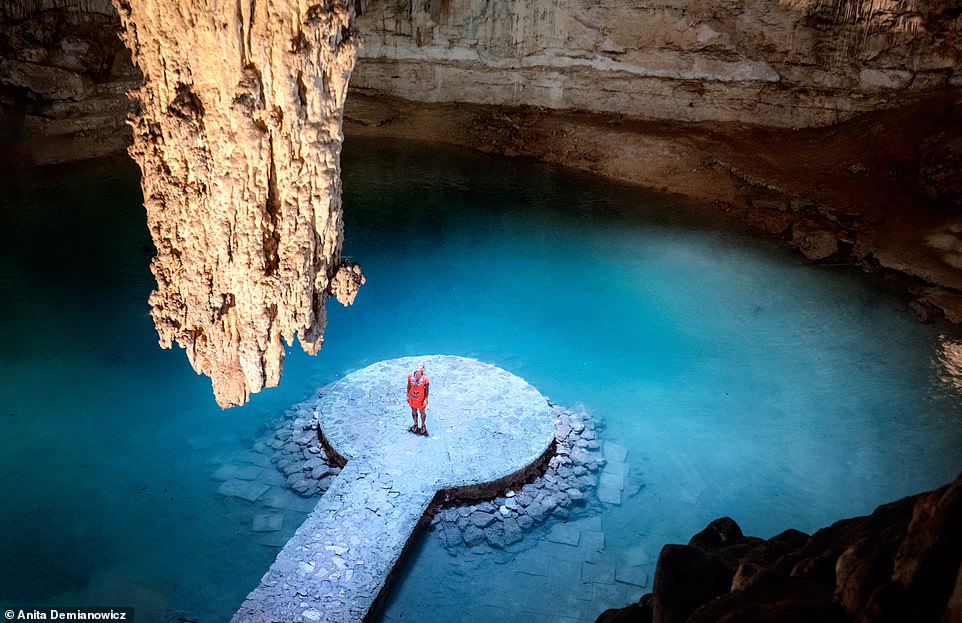 Anita poses for the camera inside the Suytun cenote on the Yucatán Peninsula in Mexico. According to Lonely Planet, a cenote is ‘a natural swimming hole formed by the collapse of porous limestone bedrock, which reveals a secret subterranean world of groundwater pools’ 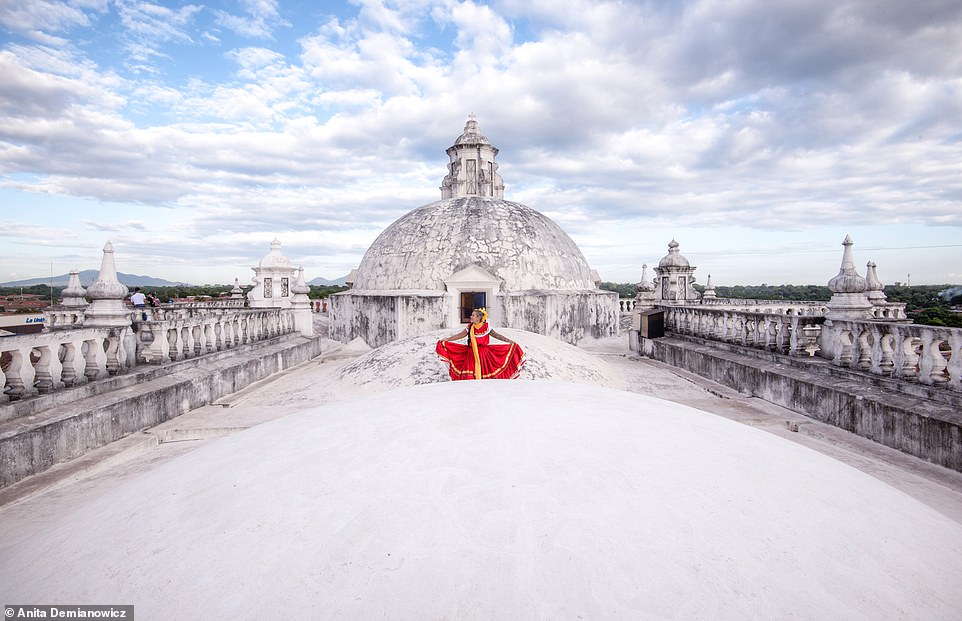 Anita stands on top of a cathedral in Leon, Nicaragua, for this stunning image. She is hoping to add more pictures to this project when she travels to Armenia, Georgia and Iceland 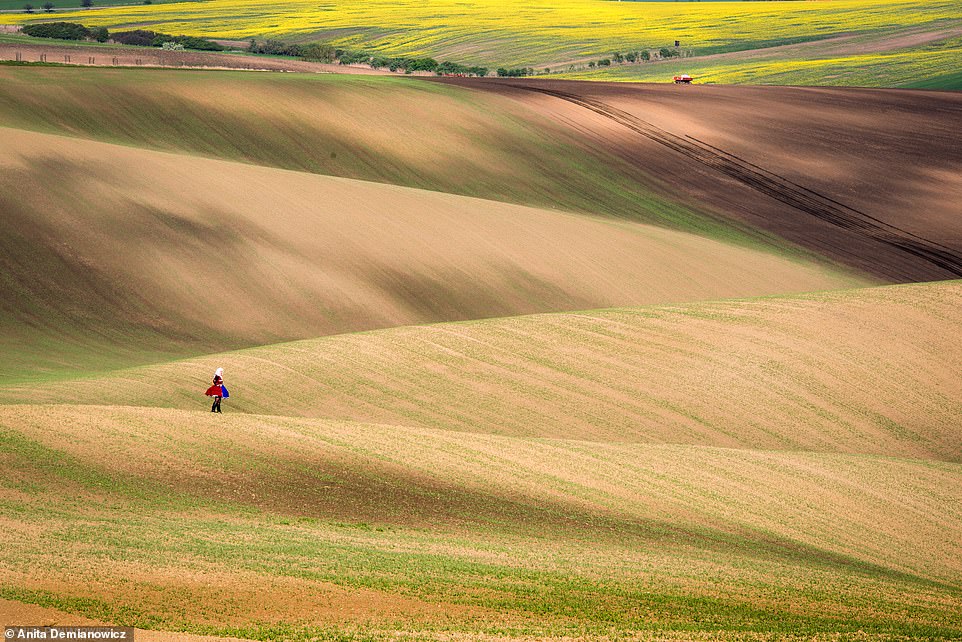 Anita said: ‘It would be much easier if I could get a model to travel with me and pose for me for these pictures. But easier doesn’t mean better. Overcoming difficulties on the road is what makes getting the shots I want more satisfying.’ Here she is pictured in the rolling landscape in the Moravia region of the Czech Republic