MILAN — “This is an act of love toward past memories, but without any nostalgia.” Valentino’s creative director Pierpaolo Piccioli has been eagerly working on the interactive brand experience dubbed “Valentino: Re-Signify Part One Shanghai,” bowing Sunday and running through Jan. 21 at the contemporary art museum Power Station of Art in Shanghai.

As Italy copes with the second wave of the COVID-19 pandemic, Piccioli has been forced to fine-tune the event remotely with the help of curators Mariuccia Casadio and Jacopo Bedussi. Kennedy London has conceived the setting.

While discussing the themes and preparations with WWD, the dismay expressed by Piccioli, Casadio and Bedussi at not being able to travel to Shanghai and attend the opening is palpable, counterbalanced by their enthusiasm in describing the steps taken to turn their ideas into reality.

Piccioli has been giving new meaning to the Valentino codes, which he underscores are still relevant today, to render them more contemporary. Inclusivity is at the heart of his mission at Valentino and, accordingly, he takes the time to underscore that “Valentino: Re-Signify Part One Shanghai” is a brand experience and not an exhibition. The latter would be “more of a celebration of the past.” Here he is opting for an “experiential approach, opening to the outside, to different artists and different forms of art, with a more contemporary perspective,” avoiding a self-referential and subjective vision, with the goal “to create an inclusive community.”

This is the first chapter in which the signature themes of the maison have been drawn from the archive and from the current collections, focused on two specific codes: the Stud, from its beginning to its evolution until the new Valentino Garavani Roman Stud, introduced with the Valentino Diary Collection, and the aesthetic universe of the Valentino Garavani Atelier, through botany and artisanal ability. A third essential and universal code is couture, filtered by Piccioli’s concept and seen “as a way of being, of imagining and of dreaming.” 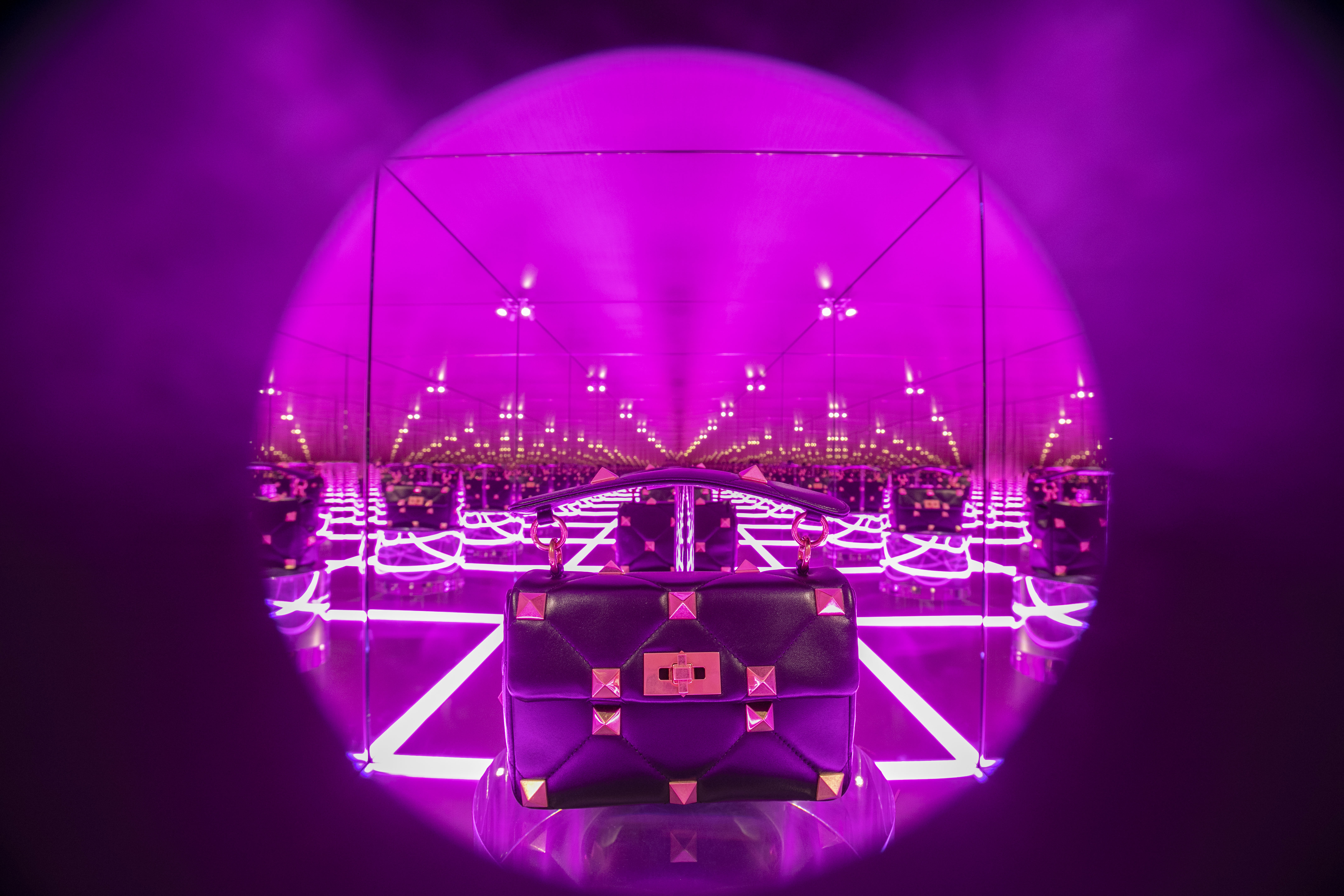 Re-signification implies a relation with a memory of a documented experience, said Casadio, adding that Piccioli is passionate and respectful of the archives, but as a means to continue his research.

“I don’t like the archives as historical pieces, but as a memory and inspiration, filtered and re-elaborated through different meanings,” explained Piccioli. “I love Valentino so much that I want the past to be part of the present, I want it to be relevant today so that its signs become signs of today.”

Certain signature Valentino designs, such as the rose, the Rockstud, or the extreme silhouettes of the “Of Grace and Light” couture collection unveiled in Rome last summer, are presented with the artworks of artists Jacopo Benassi; Cao Fei; Jonas Mekas; Stanley Mouse; Robby Müller; Quayola; Anna Ridler; Rachel Rose; Sølve Sundsbø; Natália Trejbalová, and Weirdcore. Past and present of the maison merge with the contemporary artistic and visual research, from video art to underground cinema, from photography to computer graphics.

“Pierpaolo’s work and the memory of Valentino interact with the works of the artists,” said Casadio, underscoring Piccioli’s constant research and how the designer is “not looking for newness for the sake of it” but rather “a selected choice of suggestions that inspire each other.”

She noted that the brand experience in Shanghai is “an open pathway, the entrance and the exit are the only clearly defined spots and [visitors] can lose themselves throughout a series of locations, in different relationships with time. Archival signs are re-elaborated in the present moment in continuity with the past.” For example, the Rockstud has “roots in antique Rome, but also a rock underground, in a path from exclusivity to inclusivity, integrated with the street.”

Bedussi emphasized Piccioli’s “process of democratization of the signs. A bag, a couture dress are not accessible to everybody, but the Valentino signs can be projected and reach everyone in a way that is not obvious.” He said roses are commonly associated with romantic images, but there are scientific connections that artists such as Mekas and Weirdcore explore with their videos in Shanghai. The Rockstud is punk and bourgeois at the same time, as exemplified by a black-and-white photo by Benassi on display, he said.

“An exhibition exposes in a scientific and objective way, but here I see an intellectual interaction with objects which is never passive, to create emotions,” said Piccioli, shunning “empiric knowledge,” and inviting each visitor to see things their own way. “This is all much more contemporary,” he contended.

Asked to define the potential visitor, the designer said “this would be interesting for both those unfamiliar with the brand and see Valentino in a more contemporary way here, and those who already know the label, as it would offer a different perspective, dismantling existing notions. People can change their way of seeing things, reality is not objective.” Piccioli understands there may be “a collective image” for Valentino, and is aiming for a “more democratic” approach, “interacting with the outside world.”

Piccioli avoided any chronological display, seeing the experience as a “stream of consciousness. And as in dreams, different moments and times can be superimposed in an elastic and dynamic way.”

Asked about the collaboration with the curators and the artists, Piccioli said “there was no brief, when you choose someone, you choose them for their way of thinking and common perspective.” At the same time there may be different points of view that lead to interesting causes for reflection, he continued.

Piccioli noted that China is an important market for Valentino, and one where the brand’s image is less rooted, allowing for “the signs to be new and not a memory.”

The Power Station of Art and Shanghai were equally a key element, said Casadio. Established on Oct. 1, 2012, this is the first state-run museum dedicated to contemporary art in mainland China. It is also home to the Shanghai Biennale. PSA was once the Pavilion of Future during the 2010 Shanghai World Expo.

The designer sees the event eventually traveling to other cities and he is open to the possibility of a virtual tour, but he underscored the “fluidity and exchange” of the event. “There is no absolute truth.” 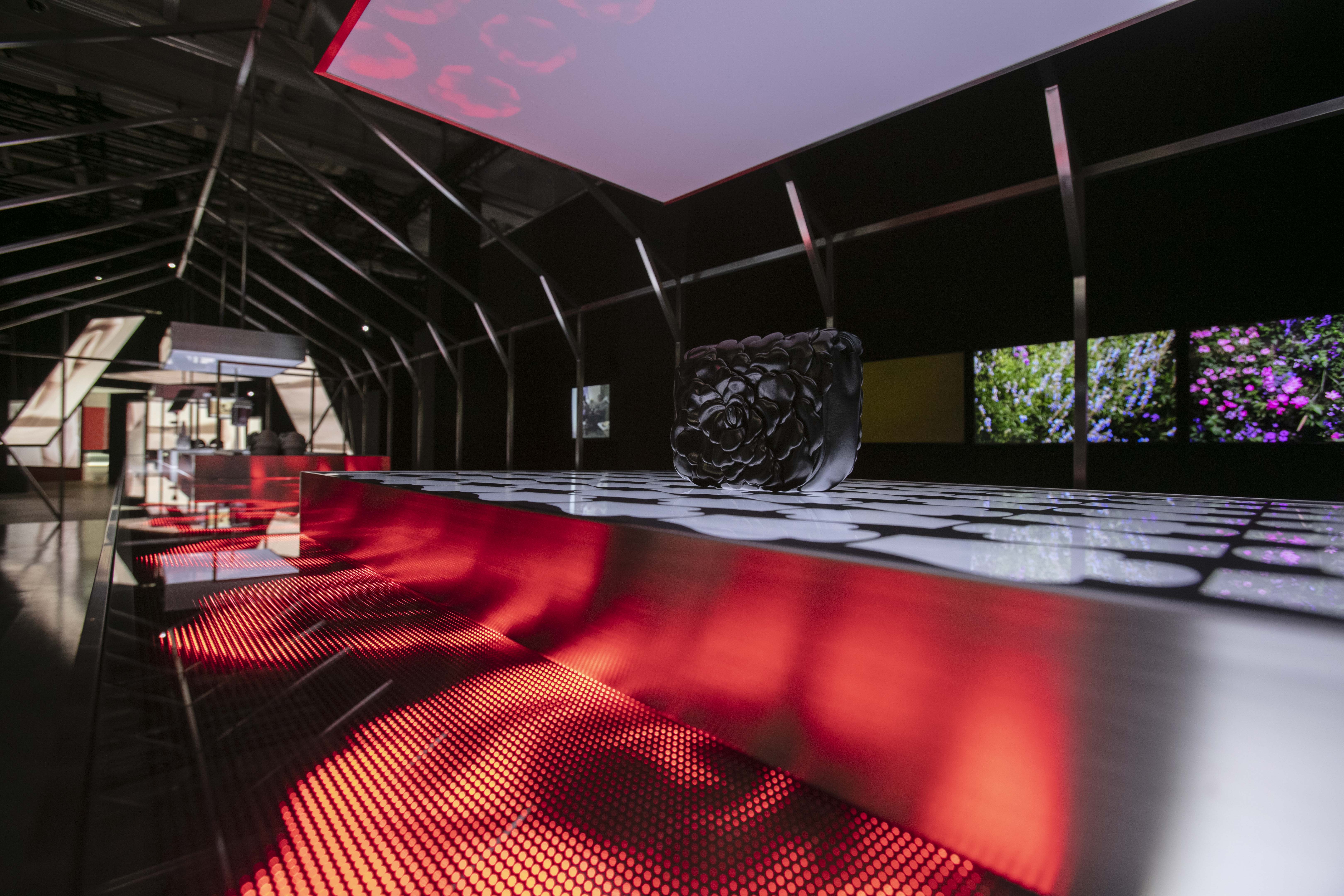