Summer in the garden – with nothing to sit on! Outdoor furniture from stores including B&Q, John Lewis and Ikea is already sold out – thanks to Suez Canal backlog and high demand because people can’t go on holiday

The British summer may have finally turned up but for many frustrated shoppers their garden furniture won’t.

A double whammy of Covid-related travel restrictions and a supply chain still affected by the Suez Canal backlog means that the most in-demand outdoor furniture lines – including rattan corner couches, hanging egg chairs and trendy parasols – have flown off the shelves.

In March, the 1,300ft Ever Given cargo ship got stuck in the Suez Canal, with the incident still affecting imports into the UK, and hopes of a summer abroad look increasingly unlikely – meaning British homeowners have been once again sprucing up their outdoor spaces.

At John Lewis, only one of the retailer’s top ten most popular dining sets is currently available, and that’s a modest-looking bistro table for two priced at £239. 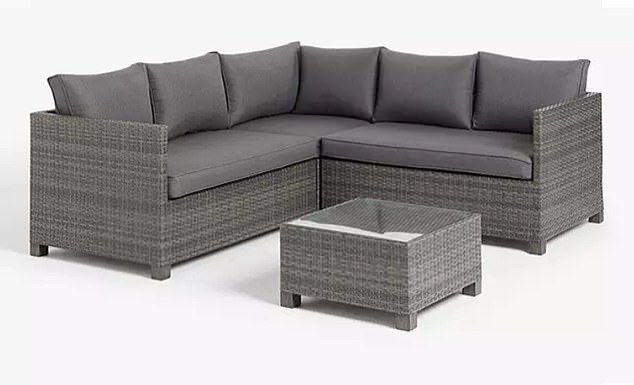 Summer sales boom: UK retailers including John Lewis, Argos and B&Q have seen their most popular outdoor furniture lines – including this £799 Alora corner set from John Lewis – fly off the shelves as the prospect of another summer at home looks increasingly likely 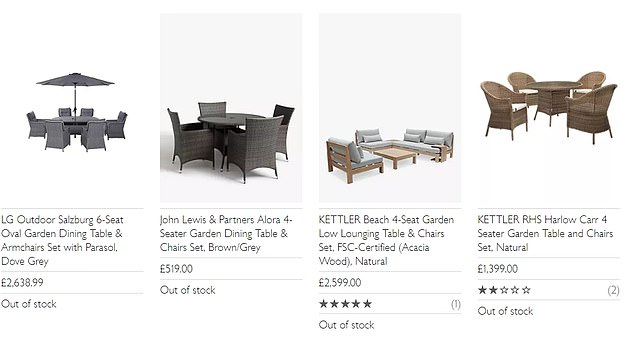 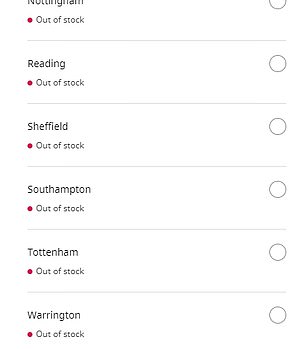 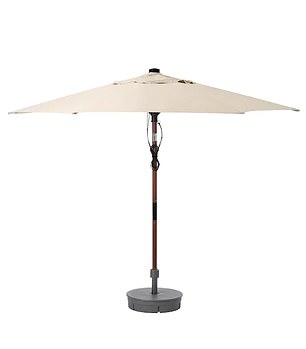 Over at Ikea, it’s a similar story – with the Scandinavian store previously warning shoppers that the Suez Canal blockage in March was still impacting delivery times for stock. This £120 Betso parasol is currently unavailable in all but one of the UK’s Ikea branches 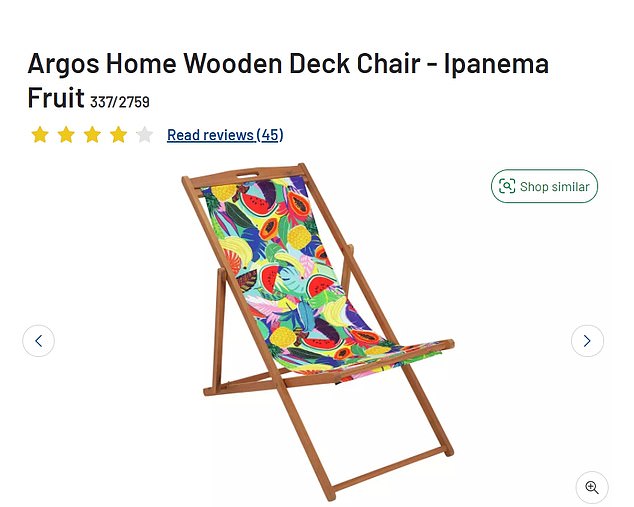 It’s a similar picture at Argos, with many of the stores summer deck chairs in high demand; this £40 Ipanema Fruit chair has sold out across the UK

At Ikea, a £120 Betso parasol is just one of the many items that brings up a raft of ‘out of stock’ results – it’s currently unavailable in only one of the home shop’s 21 UK branches.

The Scandinavian store has previously warned shoppers that the Suez Canal blockage in March was still impacting delivery times for stock.

Aldi, which has heavily promoted its summer garden range via advertising has sold out quickly on dining sets and seats including an L-shaped sofa and a hanging egg, with stock not due in again until July at the earliest, according to the budget supermarket’s website.

On Twitter last week, one Aldi shopper, @fueltheblog, grumbled: ‘I’ve been keeping an eye on @AldiUK garden furniture for a while now, it’s gone on sale three times, each time I’ve looked in the morning and it’s sold out. Really starting to believe they say it’s coming into stock, when it isn’t. #neveravailable #alwaysoutofstock’ 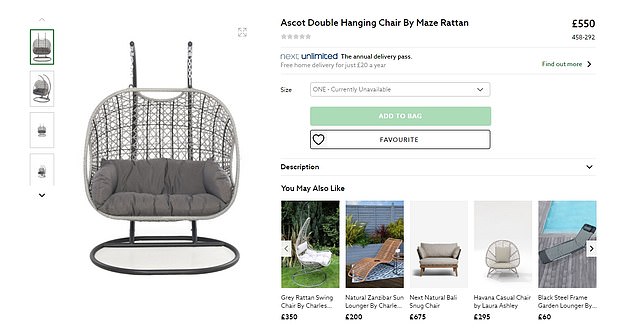 Currently unavailable: Next’s Ascot double hanging chair – which retails at £550 – has sold out, along with many other items on the high street retailer’s website 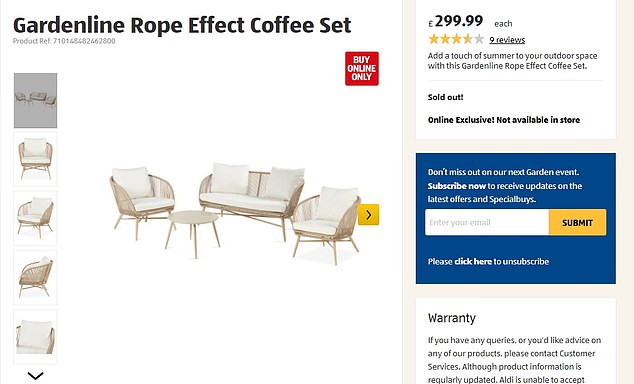 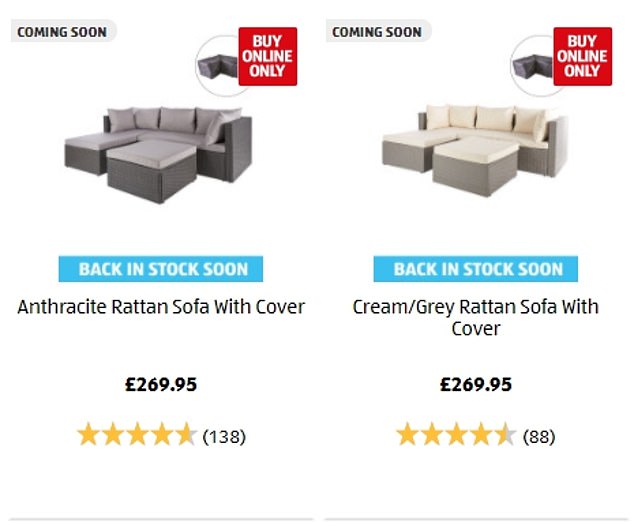 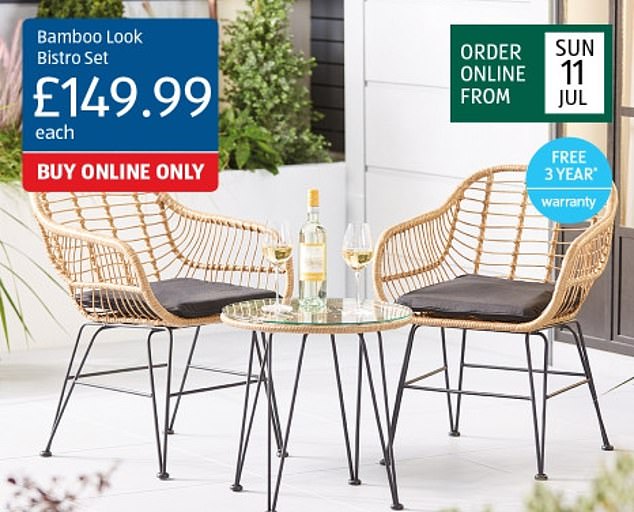 Other Aldi shoppers say they’ve faced delays even if they have managed to order stock, with one shopper @SophieRimingto5 wrote on Twitter that she’d bought ‘garden furniture on the 16th may and it’s been stuck in the collection depot since the 23rd? No updates no nothing’ 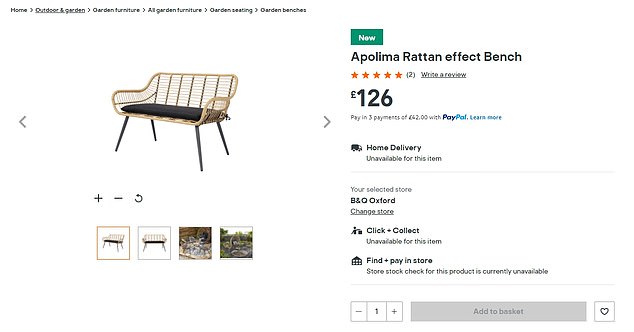 B&Q’s more fashionable stock has also taken a hit, with this £126 Apolima rattan effect bench amongst the DIY store’s many sold out items in its garden furniture section

Others managed to buy items but now face long delays getting them actually delivered. Shopper @SophieRimingto5 posted on June 2nd: ‘I have called non-stop for over a week now and keep getting told ‘wait another 48 hours’.

‘I bought this garden furniture on the 16th may and it’s been stuck in the collection depot since the 23rd? No updates no nothing.’

Online and high street store Next’s trendy double hanging egg chair, £550, is out of stock and it’s a similar picture at Argos, with many of the store’s summer deck chairs in high demand; a £40 Ipanema Fruit chair has sold out across the UK.

There is some good news though; on Amazon, there still seems to be a reasonable amount of choice available, with short delivery times. Although consumers will have to be prepared to buy without seeing their purchase first.

Summer will be over before it comes! What is available seems to have longer lead times, with this B&Q three-seater bench, retailing at £170, only available for delivery in 11 weeks

This week, the BBC reported on how the staycation boom is seeing sales soar…but also leaving retailers high and dry when they can’t get the ordered goods delivered on time.

Heather Attwooll, who runs camping and outdoor equipment store Attwoolls, told the broadcaster she’d been directly affected by the Suez Canal being blocked by a container ship back in March.

Attwool said: ‘There is a risk that small businesses like ours will soon be unable to meet that demand due to supply chain problems out of our control.’

When the Ever Given cargo vessel got diagonally stuck in the narrow but crucial global trade artery in a sandstorm on March 23rd, it not only set in place a huge mission to dislodge it, it also disrupted crucial supply chains to the UK. 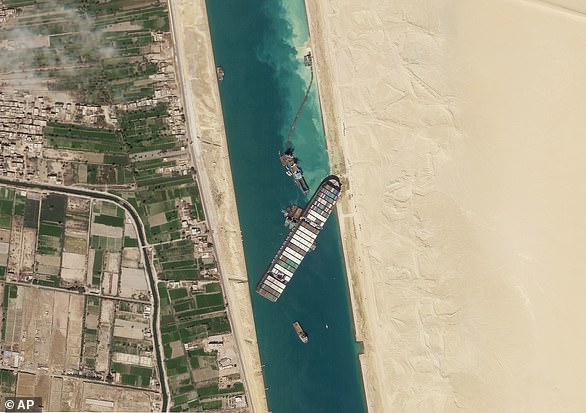 The giant cargo ship blocked shipments worth an estimated $9.5billion per day including food and oil which – and the ‘enormous’ impact is still being felt two months on.

At least 150 ships became stuck in the logjam caused by 200,000-ton cargo ship holding up goods worth $29billion in just a few days.

Analysis of UK trade data at the time showed exports from Asia to Britain were affected by the incident – with furniture, homewares, clothing and footwear among those shipments still facing delays.

Seven out of the top 10 exporters of electrical goods to the UK are Asian countries, while almost half of the UK’s furniture imports come from the same region.

China alone manufactures almost half the toys imported into Britain – which are likely to pass through the canal – and accounts for a similar amount of homewares.