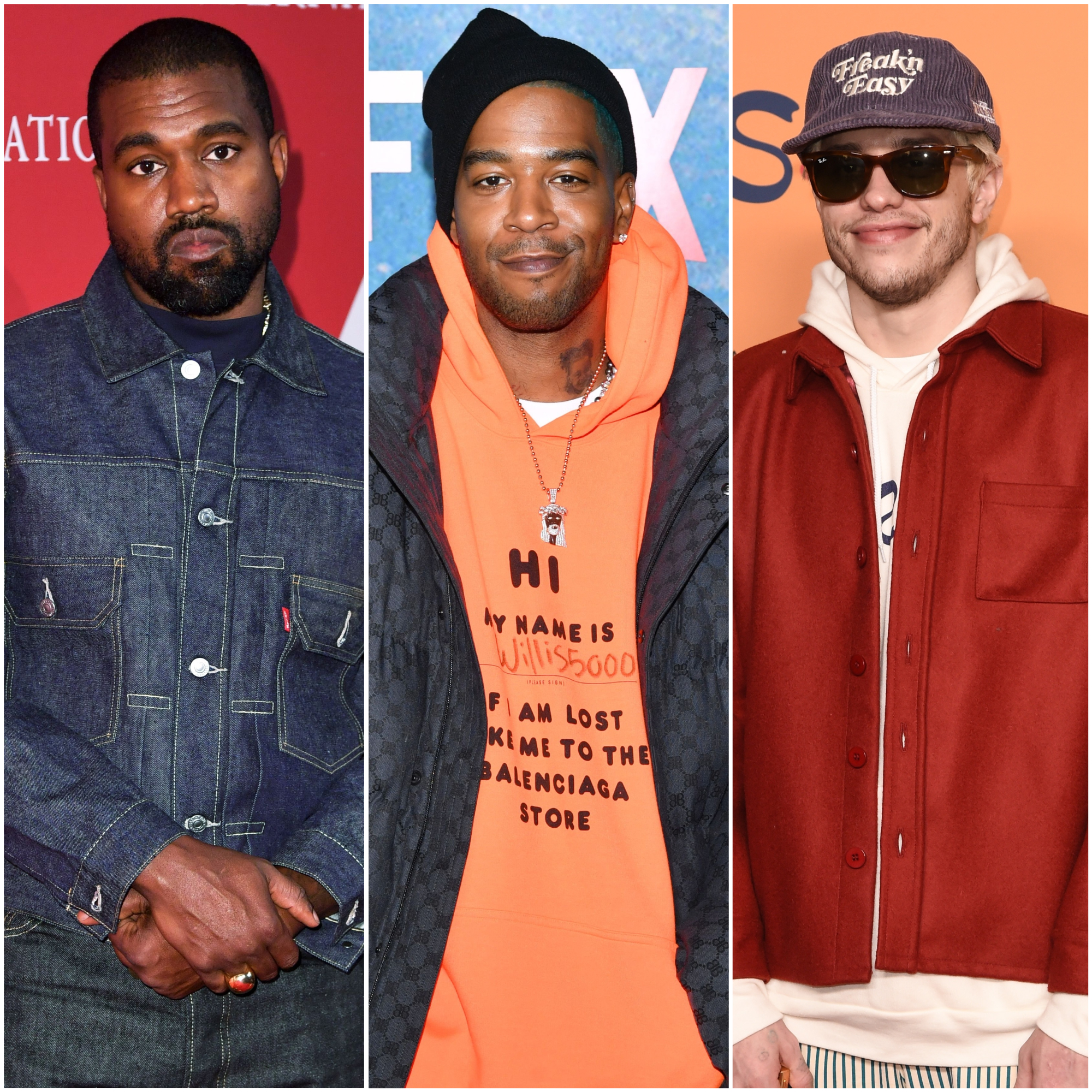 Another Instagram feud. Kanye West took to social media again to inform followers that Kid Cudi won’t appear on his next album, Donda 2.

“Just so everyone knows Cudi will not be on Donda because he’s friends with you know who,” the “Jesus Walks” rapper, 44, wrote on lined paper, which he posted a picture of via Instagram on Saturday, February 12. “We all speak in Billie language now.”

Fans immediately started speculating about “you know who” and their true identity. While a few commenters asked if West had a magical beef with Harry Potter villain Voldemort, many assumed he meant Pete Davidson, his estranged wife Kim Kardashian‘s boyfriend.

In his post, West tagged Cudi, 38, as well as Kardashian, 41, KKW Brands Chief Marketing Officer Tracy Romulus and Saturday Night Live star Michael Che. Davidson, 28, is not on Instagram, so tagging Che might be West’s way of trying to ensure that the King of Staten Island star sees his message.

Cudi and Davidson are known to be friends, and they even have a shared history with the Chicago native. During an April 2019 appearance on The Tonight Show Starring Jimmy Fallon, the SNL star told a story about how he got roped into paying for the “Pursuit of Happiness” performer’s birthday dinner, which was supposed to be just him, Cudi and one other person. However, Timothée Chalamet, Kardashian and her then-husband crashed the dinner.

In May 2021, Davidson emphasized the positive impact of his pal’s music. “I would’ve killed myself. … I truly believe if ‘Man on the Moon’ didn’t come out, I wouldn’t be here,” he told The Breakfast Club at the time.

Don’t expect Cudi to end his friendship with the KKW Beauty founder’s boyfriend, who she started dating in fall 2021. In his response, the “Day ‘N’ Nite” rapper told West that he didn’t even want to be on the album, despite being included on the deluxe version of last year’s Donda.

“Too bad I dont wanna be on ur album u f—in dinosaur hahaha,” Cudi commented via Instagram with a laughing emoji shortly after West posted on Saturday. “Everyone knows I’ve been the best thing about ur albums since I met u. Ima pray for u brother.”

On Twitter, the Ohio native seemingly addressed West again. “We talked weeks ago about this. You’re whack for flipping the script and posting this lie just for a look on the internet,” he tweeted. “You ain’t no friend. BYE.”

Everything Kanye Has Said About Kim Kardashian Since Their Split

West’s post also references another recent feud. “We all speak in Billie language now” seems to point to Billie Eilish, who the “Power” performer demanded apologize after he thought she dissed Travis Scott.

The “Happier Than Ever” singer, 20, stopped an Atlanta concert earlier this month when she noticed a fan struggling to breathe in the pit. The audience member was apparently having trouble breathing when the Grammy winner took action, asking security to get the person an inhaler from backstage.

As the fan received the medical attention they needed, Eilish encouraged the crowd to stay calm. “Give her some time, don’t crowd [her]. Relax, relax, it’s OK,” she told the audience. “We’re taking care of our people, hold on. I wait for people to be OK until I keep going.”

Days later, West threatened to cancel his Coachella appearance if she didn’t apologize for what he perceived as an attack on Scott after the rapper’s November Astroworld Festival in Houston ended with 10 people dead.

“COME ON BILLIE WE LOVE YOU PLEASE APOLOGIZE TO TRAV AND TO THE FAMILIES OF THE PEOPLE WHO LOST THEIR LIVES,” West wrote in the caption of his Thursday, February 10, post via Instagram. “NO ONE INTENDED THIS TO HAPPEN TRAV DIDN’T HAVE ANY IDEA OF WHAT WAS HAPPENING WHEN HE WAS ON STAGE AND WAS VERY HURT BY WHAT HAPPENED AND YES TRAV WILL BE WITH ME AT COACHELLA BUT NOW I NEED BILLIE TO APOLOGIZE BEFORE I PERFORM.”

The “Bad Guy” songstress replied in the comments section, “Literally never said a thing about Travis. Was just helping a fan.”

West apparently didn’t accept her response. After that interaction, fans are speculating that his phrase, “Billie language,” means referencing people without directly addressing them.

If West’s “you know who” is Davidson, as fans guessed, it might not make a difference to the comedian. An insider told Us Weekly in late December 2021 that he wasn’t bothered by the Yeezy designer’s disses or attempts to reunite with Kardashian.

“Pete is not worried about Kanye trying to get back with Kim,” a source exclusively told Us at the time. “He’s very laid-back and understanding.”

In January, another insider revealed West’s outbursts only strengthened the new couple’s bond. “It’s not impacting their relationship at all,” the source explained. “If anything, this drama is bringing Kim and Pete closer together because he makes things so easy.”

Kardashian filed for divorce from West in February 2021.