Doctors would be allowed to use telehealth to conduct appointments about voluntary assisted dying, and the threshold for who can access euthanasia could be lowered under a crossbench plan to be debated in Parliament this week.

Victoria’s voluntary assisted dying laws, which came into force in 2019, require two doctors to make an in-person assessment to ensure the patient is of sound mind, and has less than six months to live with a physical illness or 12 months with a neurological condition. 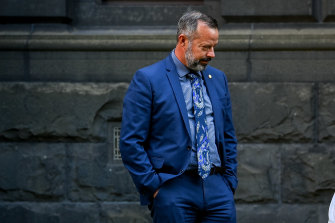 The historic legislation passed Victoria’s Legislative Council in late 2017 after a marathon 28-hour sitting, and despite ferocious opposition from conservative MPs.

Justice Party MP Stuart Grimley will introduce amendments to remove some of the hurdles faced by people who have been unable to access the scheme.

Mr Grimley hopes the changes will give regional Victorians the option to use euthanasia to end their lives.

“Voluntary euthanasia and telehealth are both part of our future and here to stay.”

The Voluntary Assisted Dying Review Board said in its latest report that while accessibility to euthanasia was improving for regional Victorians, there was a need for more specialists. It also found that 36 per cent of applications to access the scheme were from patients living outside of metropolitan Melbourne.

Dr John Daffy from the Australian Care Alliance, a group opposed to voluntary euthanasia, said he was “extremely concerned” about any legislation that would enable doctors to conduct telehealth consultations on “something as serious as this”. 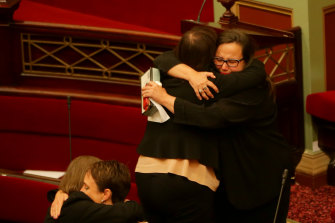 There were emotional scenes in the Victorian Parliament in 2017 after the upper house passed historic euthanasia laws. Credit:Jason South

“Through in-person consultations, you get to know patients and with every consult and interaction you learn more about them and you can pick up on their unspoken body language, which can’t be ascertained through the internet,” Dr Daffy said.

“I understand the motivation, they’re doing it because of people in the country … but you’re talking about people killing themselves. It’s actually the most serious thing anyone would ever be involved in, and it would seem inappropriate to do it via telehealth.”

Euthanasia advocates for terminally ill patients, including Mr Grimley, the VAD Review Board and the Andrews government, have urged the federal government to overturn legislation, which essentially makes it illegal for doctors to conduct voluntary assisted dying appointments via telehealth.

Mr Grimley’s amendment would also allow terminally ill patients who have lived in Victoria for three years or more but do not have permanent residency to make use of the legislation. (Currently only those with permanent Australian residency are able to access it).

“If you have lived in Australia for more than three years and for all intents and purposes are an Australian but don’t hold a permanent residency visa, you shouldn’t be stopped from accessing VAD,” he said.

The amendments would also make explicit that voluntary assisted dying is not suicide, reflecting laws introduced in Western Australia and Tasmania. The Justice Party believes its proposed amendments would make it difficult for the Commonwealth to prosecute doctors and patients.

A Victorian government spokesman said the Commonwealth’s Criminal Code 1995 had proven to be a barrier for accessing voluntary euthanasia, particularly for regional patients or those too ill to attend an appointment in person.

“We’re aware that intersecting Commonwealth laws make it difficult for telehealth to be used to discuss voluntary assisted dying, which has also been exacerbated by restrictions required as part of the coronavirus pandemic response.”

“The Victorian government and the independent Board has repeated its call for the Commonwealth to reconsider making an exemption from the Criminal Code to allow Victorians, especially those in regional Victoria, to be able to have important conversations about voluntary assisted dying over the phone or via teleconference.”