Already 14 people have died riding quad bikes on Australian farms in 2020, nearly double the total for 2019, prompting a consumer watchdog warning to drive carefully and fit safety devices to vehicles.

Quad bikes are the leading cause of farm deaths. There have been 150 fatalities since 2011, six people go to hospitals everyday with quad bike-related injuries, and over the past 20 years an average of 16 people are killed each year. 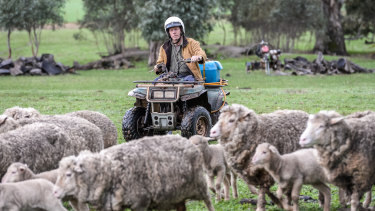 Quad bikes, pictured here without roll-over protection, are the leading cause of deaths on farms in Australia. Credit:Justin McManus

"For many years, manufacturers have been claiming rider behaviour is the major reason for
the number of deaths and injuries. Their aim has been to shift the focus away from the
unsafe design of quad bikes," Mr Keogh said.

"Quad bikes are an important part of rural life but the ongoing fatalities and serious injuries
are incredibly concerning. They highlight the importance of this new safety standard."

In an ACCC inquiry, the quad bike industry opposed mandatory roll-over protection on vehicles and argued driver education and behaviour was the primary cause of deaths. The federal government announced new safety standards in October last year.

Mr Keogh said the relatively low death toll of nine for 2019 created a perception among some that promotion of rider safety, such as the risks of driving on hills, had delivered long term improvements.

"There had been a perception in the past couple of years that the deaths had gone down, as the publicity around the inquiry and need for training, and keeping kids off adult-sized quad bikes," he said.

Under the new laws, which will be in place by October this year, all new and directly imported second hand quad bikes must be tested for lateral stability and have a label to display the angle at which that model tips onto two wheels.

By October next year all new quad bikes must be fitted with roll over protection devices and also must not tip on to two wheels on a slope less than 28.81 degrees.

Of the 14 fatalities so far this year, three have been children.