Whether you know Queen Latifah as a hip-hop icon, sitcom legend, Oscar-nominated actor or rom-com queen, no one can deny she’s changed the culture for the better.

Now, she can add “Lifetime Achievement Award winner” to her untouchable resume, after being honored at the 2021 BET Awards on Sunday night, an evening with the theme “The Year of the Black Woman.”

Following in the footsteps of past recipients, including Whitney Houston and Mary J. Blige, Latifah (née Dana Owens) was honored at the in-person ceremony at the Microsoft Theater in Los Angeles for her contributions to Black music and pop culture over her decades-spanning career.

After an introduction from rapper MC Lyte, rapper Rapsody paid tribute to Latifah by performing unapologetic feminist rap anthem “Ladies First” along with rapper Monie Love. Lil’ Kim came out in all white to perform “U.N.I.T.Y.,” with MC Lyte also joining in.

Latifah took to the stage to accept the award, stunning in a black, white and pink gown with a cape.

“I want to thank BET for creating an outlet for beautiful blackness to thrive, to shine, when we couldn’t get played on the radio and other places,” she said in her speech. “We couldn’t get our videos played in other places; there was BET that allowed us to be in our fullness and to shine.”

Latifah also thanked longtime business partner Shakim Compere, whom she says she would not be standing on the stage without his “dreams, aspirations and partnership.” 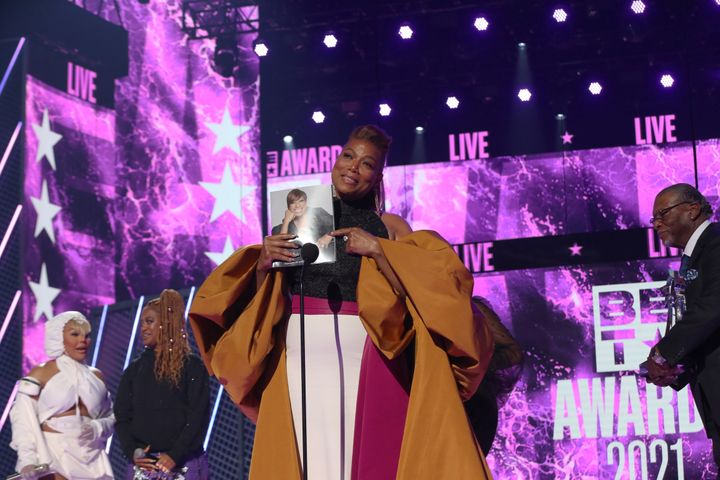 Ahead of the show, host Taraji P. Henson praised Latifah for carving out a space for herself across multiple media, in turn allowing other Black women to do the same.

“I want to tell her in person and on live television how much she has meant to me and how much she has inspired me,” Henson told Variety. “She built a brand. She came from hip-hop, she had a record label and flipped that, she became a TV executive producer and had her own show. She did movie after movie. She just reinvents herself.”

Queen Latifah’s entertainment career began in the late 1980s, when she burst onto the hip-hop scene as a powerhouse and pioneering emcee on her debut studio record, “All Hail the Queen.” Right out of the gate, Latifah made her intentions clear with “Ladies First,” informing listeners in the opening verse that “a woman can bear you, break you, take you.”

“I’ve always celebrated the woman because I was raised by a strong Black woman, raised by a father who loves women,” Latifah said in her acceptance speech, while holding a picture of her late mother Rita Owens. “I wanted to celebrate us because I know together we stand stronger than we tear each other apart.”

“Respect to all the female emcees on the stage tonight.”

Her trailblazing music career went on to encompass six more albums, including “Black Reign,” which boasted her Grammy-winning hit single “U.N.I.T.Y.” Over time, Latifah began transitioning away from hip-hop and taking on soul- and jazz-inspired sounds in later records.

As her music star rose, Latifah was also making moves in Hollywood. In 1993, she landed her breakout role on the sitcom “Living Single,” which became a ratings success for Fox and one of the most watched and beloved Black television series of all time. During her tenure on the show, she also starred in the female-led heist film “Set It Off” alongside her friend Jada Pinkett Smith, with whom she’d reunite in the blockbuster comedy “Girls Trip” years later.

Latifah’s musical gifts made her a rare on-screen talent. She nabbed an Oscar nomination for best supporting actress for her turn as Matron “Mama” Morton in the universally acclaimed 2002 film adaptation of “Chicago.” She also took home a Screen Actors Guild Award for her portrayal of blues legend Bessie Smith in HBO’s television movie “Bessie” in 2015.

Never content to stay in one lane for too long, Latifah also launched a talk show, “The Queen Latifah Show,” in 1999. She revived it nearly 15 years later for a two-season run on CBS with a total of 175 episodes in the can.

Latifah currently stars in and executive produces the action series “The Equalizer,” which quickly became one of the most watched scripted series on network television this year and has been renewed for a second season.