A virtual reality simulation system costing £300,000 is being trialled by the Royal Air Force (RAF) in an effort to make combat training more immersive and realistic.

The ‘first-person shooter’ -style combat game is being developed under contract with the UK Ministry of Defence by the veteran-run software company SimCentric.

SAF-TAC will also be put through tests this year with members of the British Army and the Royal Marines, alongside the air force.

It is intended that the virtual simulator will become a routine part of the armed forces’ wider training programme to support and enhance real-life exercises. 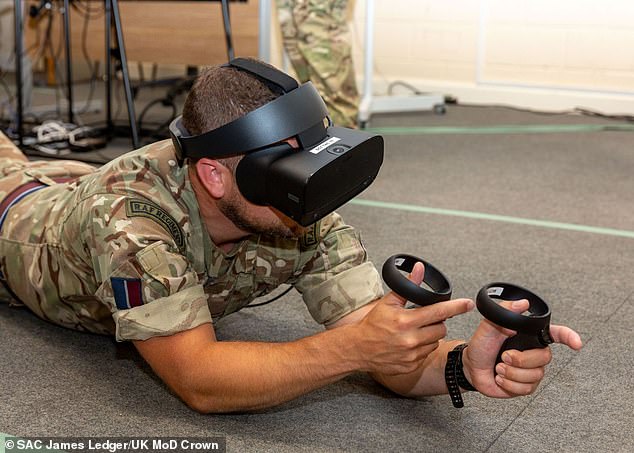 A virtual reality simulation system costing £300,000, pictured, is being trialled by the Royal Air Force in an effort to help make combat training be more immersive and realistic 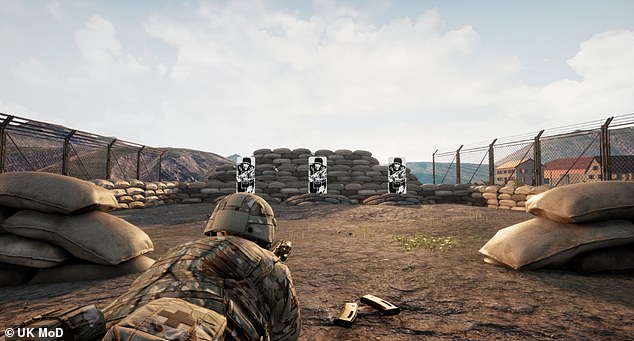 The ‘first-person shooter’ -style combat game, pictured, is being developed under contract with the RAF by the veteran-run software company SimCentric

‘As a veteran and current reservist, I’m proud to help train the armed forces of the future,’ said SimCentric’s director of innovation, Tom Constable, formerly of the British Army air corps.

‘I joined the British Army in 2006 and later served in Afghanistan,’ he explained.

‘This gave me a passion for building technology that will reduce the risk to our armed forces and improve the quality of training.’

SimCentric’s work, he added, has ‘the ultimate aim of saving lives.’

According to the RAF, it is ‘crucial’ that they keep up with the acceleration in technological developments — both to understand their current capabilities, but also to make such fit their evolving training needs.

SimCentric’s combat simulator has already been trialled by the air force’s Training Wing, which is based out of RAF Honington in Bury St Edmunds, Suffolk.

Sargent R.E. Minshall of Training Wing’s Training Support Squadron said that the trial of the combat simulator had ‘allowed [him] to gain further understanding of how we can incorporate VR into training.’

‘With the given opportunity to have input from the instructors on the trial, it will make for a system that is fit for our needs.’

‘I am looking forward to seeing this become incorporated into out training in the future.’

‘I can see its many of benefits being used to enhance the training that Training Wing provides to all phases.’ 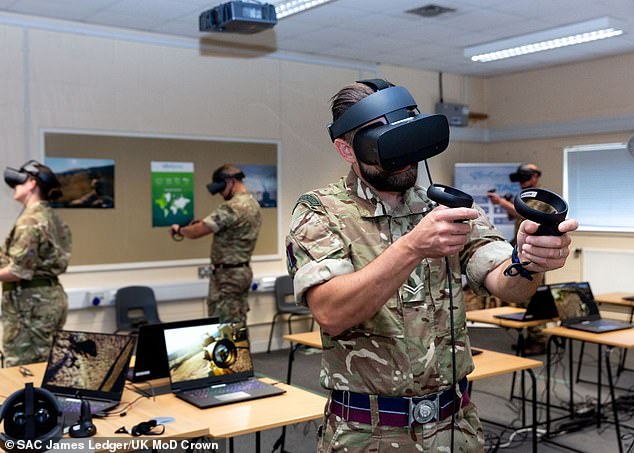 It is intended that the virtual simulator will become a routine part of the armed forces’ wider training programme to support and enhance real-life exercises. Pictured, an RAF member trials SimCentric’s virtual reality combat simulator 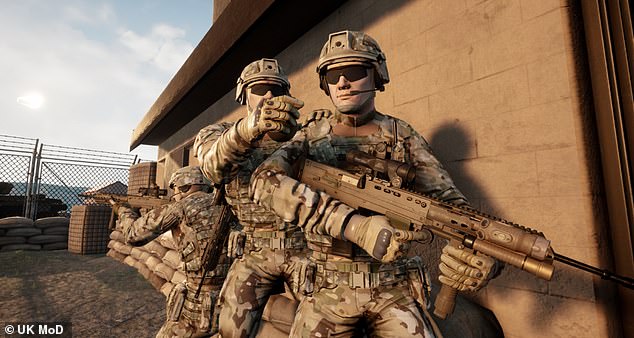 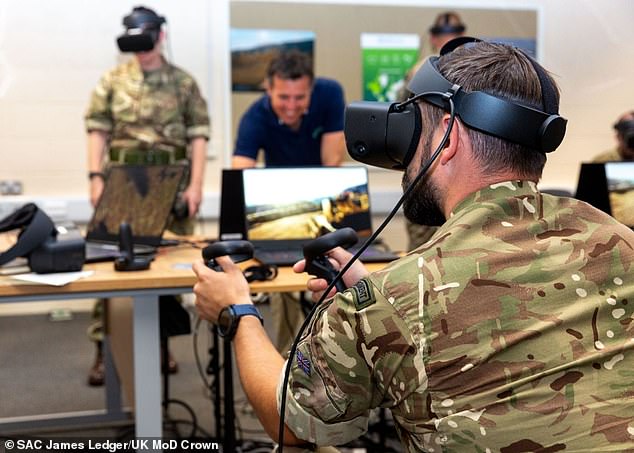 SAF-TAC will also be put through tests this year with members of the British Army and the Royal Marines, alongside the air force. Pictured, air force members trial the simulator

The tests of the SAF-TAC combat simulator come amid a wider push by the British Armed Forces towards virtual war gaming.

According to the Financial Times, defence chiefs have tasked software firm Improbable to create a digital replica of Britain, with the aim of testing the country’s resilience to future pandemics, natural disasters and attacks from hostile nations.

‘This would have been really useful in understanding the spread of the pandemic, […] of measures taken to inhibit it and improving public communications,’ said former head of Britain’s joint forces command, Richard Barrons.

‘We still need one for whatever [crisis] happens next.’

The ‘single synthetic environment’ — which will marry maps of geographical terrain with those of critical infrastructure like fuel, power and water supplies  — will be used to simulate disaster scenarios with the aid of artificial intelligence.

Future simulations could also include realistic reconstructions of overseas combat arenas — and, in fact, one of Improbable’s prototypes is based on a Baltic country, the Financial Times reported.

They added that the Ministry of Defence has already invested £25 million in contract with the software development firm.

Virtual reality is a computer-generated simulation of an environment or situation.

Virtual reality is the term used to describe A three-dimensional, computer generated environment which can be explored and interacted with by a person.

That person becomes part of this virtual world or is immersed within this environment and whilst there, is able to manipulate objects or perform a series of actions.

How is virtual reality achieved?

Virtual reality is usually implemented using computer technology. There are a range of systems that are used for this purpose, such as headsets, omni-directional treadmills and special gloves.

These are used to actually stimulate our senses together in order to create the illusion of reality.