If you wake up to flakes flying on Mother’s Day morning in the Great Lakes, Ohio Valley and Interior Northeast, you just may not be dreaming. That’s because stubborn spring cold will combine with a moisture laden storm system to drop temperatures just low enough for some wet, sloppy snowflakes.

Snow in May in this part of the nation is not unheard of, but it is rare. The last time Chicago recorded a trace of snow in May was 2004. In and around this region, measurable snow in May seems to occur about once every decade or two depending on how far north or south the location is.

A storm system located over the central Plains states will move east overnight Saturday into Sunday, sparking severe storms in Kansas, with a few supercell thunderstorms capable of dropping tornadoes. This will turn into a squall line and head southeast through Kansas City and St. Louis, bringing with it the threat of damaging wind gusts over 70 mph.

On Sunday, the severe weather will sink southeastward into the warm and moist air over eastern Texas, Arkansas and Louisiana. But the northern side of the storm will remain in the cold sector.

For most, this will mean a steady, cold rain from Iowa eastward through the northern Ohio Valley, southern Great Lakes and into the interior Northeast on Mother’s Day. In fact, most of the region will pick up a drenching 1 to 3 inches of rain. 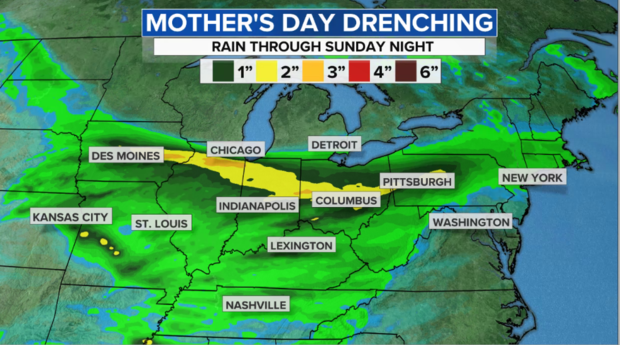 But for a very narrow strip that finds itself in the heaviest precipitation, heavy, wet snow flakes will mix in. That’s because when the atmosphere is borderline cold enough for snow, a phenomena called dynamic cooling from the heavy precipitation band itself can cool the column enough to generate snow.

The trick is forecasting exactly where that will set up. As of Saturday night, the models show that very narrow band, perhaps only 30 miles wide, stretching from northern Illinois to northern Indiana, northern Ohio and the Northern Tier of Pennsylvania near the border of New York. That may take the wet flakes just outside Chicago, South Bend, Indiana, south of Cleveland and near Bradford, Pennsylvania. Basically, the most likely places to spot snow will be just far enough away from the Great Lakes to avoid the milder air near them and places with elevations similar to Northwestern Pennsylvania.

What happens in May when you are stuck with polar blocking and get a storm with heavy steady precip? Mother’s day sloppy snowflakes. Notice how the snow band is very narrow – where the heaviest precip falls. But regardless raw, chilly 30s/ 40s tonight and tomorrow! pic.twitter.com/jojncTfPdU

It generally won’t amount to much, but there could be a couple of hours of heavy enough wet snow to dump a slushy inch on grassy surfaces. And the hills of Northern Pennsylvania may squeeze out a couple of fleeting inches. In most places it will simply melt on contact with the ground. 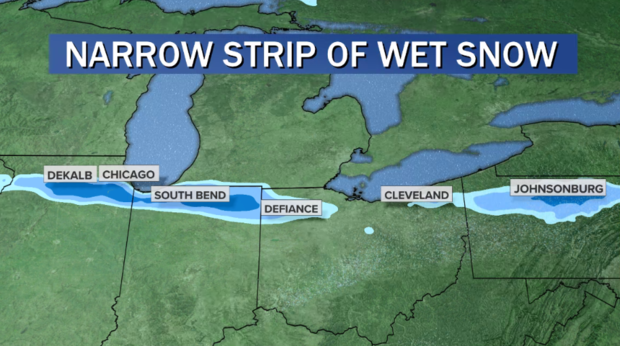 Regardless of whether you experience snow or cold rain in these areas, it will be raw and chilly, with lows in the 30s overnight and temperatures on Mother’s Day hovering in the 40s for most of the day. 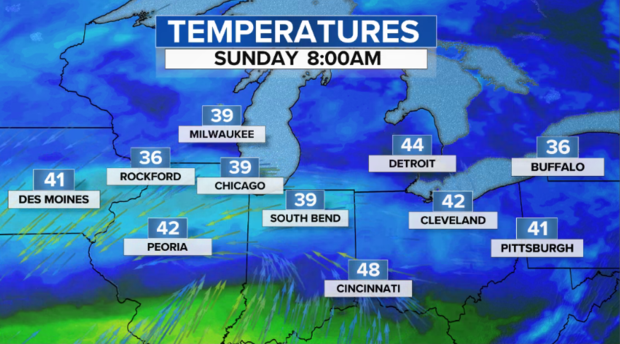 So, what is causing this unusual pattern? You may have noticed that cool temperatures have been slow to lessen their grip this spring. That’s because there is an atmospheric condition that meteorologists call a blocking pattern near Greenland. This is when a ridge of high pressure — you can think of it as a mountain of warm air in the atmosphere — gets stuck over the Polar regions of eastern Canada and the North Atlantic.

What gives with this relentless spring chill in the Great Lakes and Northeast?? Well.. .the pattern is still blocky in Canada/ Greenland. These robust disruptions are hard to dislodge, aren’t they @judah47 So, the ten day departure from normal (Euro) on the right, stays chilly! pic.twitter.com/RXLCd1wqRb

The result is cold pockets of air that would normally be way up north get pushed out and displaced south across the northern U.S. This stubborn pattern has been around since the beginning of April. In fact, we can trace this pattern all the way back into winter when Texas and the Central U.S. suffered with historic cold. In climate, these blocky patterns are sometimes tough to break down, especially when they are as robust as what we saw this past winter.

So, if you live in the Great Lakes or Northeast and wonder why it just doesn’t seem to want to warm up consistently, now you know why. Looking ahead to the next week or two, while there will be brief warm ups, but there is little reason to believe this cool stubborn pattern will break. The forecast for the next 10 days — seen on the right in the tweet above — shows below normal temperatures in blue and green in most of the eastern U.S.