Real-life ‘Jurassic Park’ could probably be built ‘if we wanted to,’ Elon Musk’s Neuralink partner says

Elon Musk’s business partner says a real-life version of "Jurassic Park" could "probably" happen but only if the tech whizzes "wanted to."

The co-founder of Musk’s Neuralink company, Hodak, hit send on a tweet that suggested that any featured dinosaurs at a metaphorical Jurassic Park "wouldn't be genetically authentic dinosaurs." But, with about "15 years of breeding and engineering" anything is possible "to get super exotic novel species," he added.

However, many of those who responded to Hodak made their skepticism known to the executive.

While such an endeavor sounds like an ambitious impossibility, Tesla and SpaceX executive Musk has reveled in opportunities to otherwise prove his doubters wrong.

Neuralink has created strides in regards to advancement in brain science and implantable computer interface technologies centered on improving neurological connections in those diagnosed with Alzheimer's disease, dementia, paralysis, and other major ailments.

Last July, Musk even said the Neuralink will even be able to stream music straight into users’ brains.

In the 1993 fictional "Jurassic Park" film, the popular theme park, which is filled with extinct dinosaurs, is erected after a team of genetic scientists successfully extract dinosaur DNA from prehistoric mosquitoes.

Fans of the film franchise will remember plans of opening the colossal park go up in smoke when the man-eating dinosaurs break and dangerously run amuck before the park sees its grand opening. 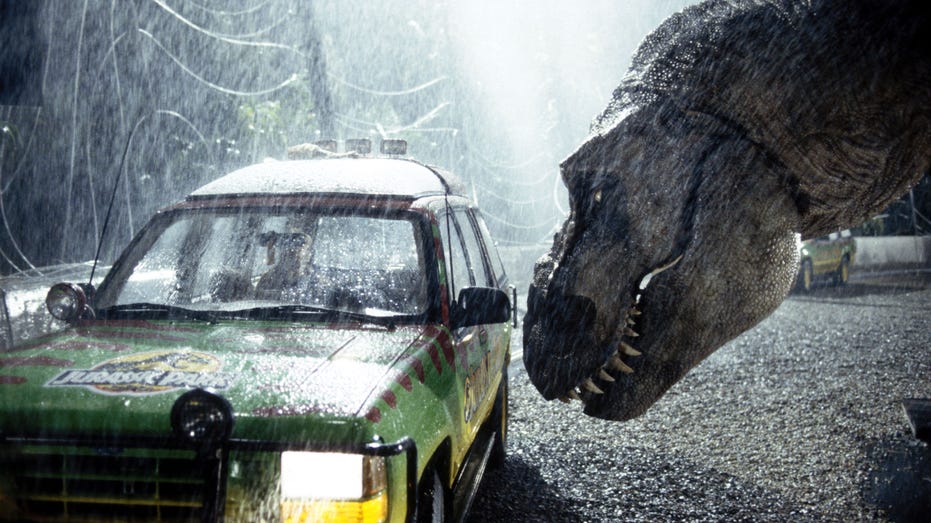 A tyrannosaurus rex terrorizes people trapped in a car in a scene from the 1993 film ‘Jurassic Park’ directed by Steven Spielberg. Elon Musk’s business partner says a real-life version of ‘Jurassic Park’ could ‘probably’ happen but only if the tech w

Meanwhile, come June 10, thrill-seeking theme park visitors will be able to take a ride on the new Jurassic World VelociCoaster at Universal Orlando’s Islands of Adventure

The ride takes inspiration from Trevorrow’s reboot from 2015 and features the original cast, including Chris Pratt as Owen Grady, Bryce Dallas Howard as Claire Dearing and BD Wong as Dr. Henry Wu, a company press release said on Wednesday.

When passengers get on the ride, they can expect a high-speed adventure through a velociraptor paddock, which features the film’s four raptors: Blue, Charlie, Delta and Echo.

"Jurassic World 3," starring Pratt and Howard, is to be released June 2021.