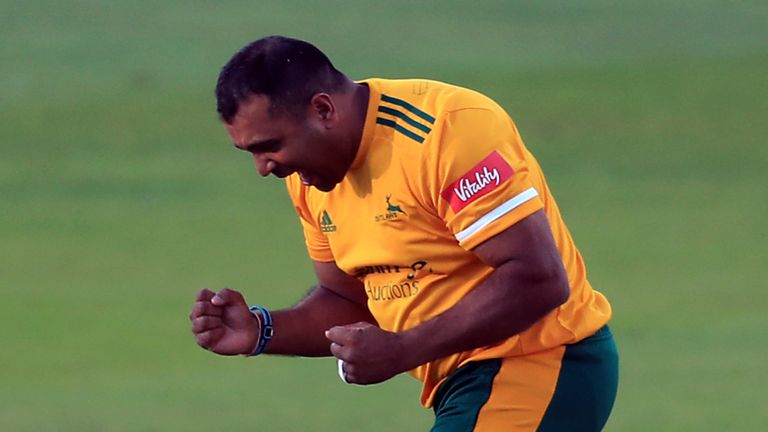 Veteran all-rounder Samit Patel took the starring role as Nottinghamshire Outlaws beat Derbyshire by two runs to go second in the North Group after a Vitality Blast match shortened by rain to 15 overs a side.

The 36-year-old hit three sixes and six fours in an unbeaten 62 – his first half-century in the format for three years in his 110th consecutive appearance – and in taking 2-14 from three overs of his left-arm spin entered the record books as the first English player to complete the double of 250 wickets and 5,000 runs in Twenty20 cricket.

Luis Reece hit 56 from 26 balls and Leus du Plooy an unbeaten 58 including a six off the last ball but Derbyshire fell two runs short of their target of 153.

Ben Duckett supported Patel with 38 off 25 balls as the Outlaws totalled 152-6, the wickets shared equally between seamers Logan van Beek and George Scrimshaw.

Glamorgan won the other Blast fixture to beat the weather with Colin Ingram smashing 75 in a 21-run South Group success over Middlesex.

The South African hit half of his team’s runs in a stunning 48-ball knock which included 10 boundaries and two maximums.

Steven Finn impressed for Middlesex with 4-19, but they were unable to chase down Glamorgan’s total of 150-9.

Elsewhere, rain meant that matches between Birmingham Bears and Lancashire, Worcestershire and Northamptonshire, Yorkshire and Durham, Surrey and Hampshire, Sussex and Somerset, and Essex and Gloucestershire were abandoned without a ball being bowled.