Parenting with an ex-partner is not typically an easy feat, especially when said ex-partner walked out on the relationship after bringing a child into the world. The resentment held by the walked-out-on party is undoubtedly justifiable, but in some extreme cases — say, a terminal illness diagnosis — many would argue that the resentment should be put aside for the sake of the child making the most of their time left with their dying parent, deadbeat or not. That, in a nutshell, is exactly what this Reddit mom is dealing with.

Taking to the platform’s “Am I The A—hole” forum, the woman explained, “I’m a mother of a 16 (soon 17) daughter ‘Kelly.’ Her bio dad left when she was 4. It’s complicated but despite him being away he still sent money or had his family help from time to time. I still struggled a lot raising her til I met my now husband ‘Christopher.’ Christopher is like a dad to Kelly. He’s the only father figure she had.”

She continues, “However, I found out that she’s reconnected with her bio dad through his family (his mother) which I wasn’t happy about but I didn’t make a fuss about it. Then she started mentioning him often, going to visit him while canceling plans to hang out with us etc. Her justification is that her dad is sick and might be (I say might because she’s a child and may not know what it meant) terminal. She sees him at his friend’s house where he’s staying now.”

It’s understandable that this mom’s feelings would be hurt by her daughter choosing to spend time with the man that walked out on them — there’s a lot of resentment there, surely. However, her daughter is nearly an adult, despite her belittling her and calling her a child, and if she wants to restore the bond between herself and her father, that’s her decision. The terminal illness is a huge factor in this, too.

The mom explains the core issue, writing, “Christopher and I were planning her 17th birthday party at our house. Kelly told me that she’d like to have her bio dad come over to celebrate since he may not be able to be around next year. Christopher said no immediately. He said he won’t let that man come into his house which made Kelly cry saying that we were robbing her of a last chance to make memories with her dad after finally finding him again. I told her that I don’t feel comfortable having him come to the house and be in the same room as him.”

She continues, “Her stepsister said that both me and Christopher are overreacting and that Kelly wants her dad to take part in her birthday so badly. Christopher left the house and I snapped at Kelly and threatened to cancel the whole thing.” 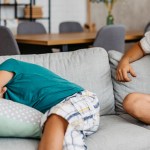 For how big her and Christopher’s reactions are, it feels like the mom may be omitting details about other wrongdoings by her ex-partner. However, she doesn’t mention anything outside of him leaving her and not being around, so for us, her and her husband’s reactions seem to be rooted in old resentment and ego. For all they know — not that they’ve bothered to confirm with the bio dad or anyone on his side of the family — the man is dying. If both he and his nearly adult daughter want to make the most of their time left with one another, it’s pretty cruel for the mom to deny that.

Reddit mom continues, “Later when we calmed down I suggested she goes to celebrate with him but she said her friends and their parents won’t be able to attend. She also said he can’t throw her the party since he’s sick. We had another argument and she started ignoring me and Christopher while staying in her room. She’s saying she won’t forgive me if I let her dad miss what could be her last birthday with him.” She asks, “Am I being unreasonable or is she?”

While some Redditors, like us, expressed a desire for more context, most users ripped the mom a new one for her take on the situation. One person wrote, “YTA. This isn’t about you. Your daughter has reconnected with her dad and wants him in her life for as long as he is alive, which apparently is not very long at all. I understand you have resentment against him, but he, by your account, helped with money throughout your daughter’s life. If this is the hill you want to die on, be prepared for your relationship with your daughter to take a massive dive. (Also, 17 is not a child and she does know what terminal means… smh).”

Another user criticized the mother for her lack of involvement in the situation, writing, “You seem to be unsure of whether or not he’s actually sick and are not really aware of how they spend their time together. You should be more on top of this and not just allow someone who hasn’t been around to pop up out of nowhere without a bit of gatekeeping and boundary setting. You let this get out of hand because you haven’t bothered to communicate. How do you not think she’s capable of understanding the word terminal, but at the same time think she’s old enough to process the emotions of dealing with a parent come back into her life that may be dying. Talk to her! And help her!!!”

One user was gentle but critical of the mom, writing, “You’re well within your rights to feel uncomfortable and resentful around him and not want him in your home. She’s well within her rights to want to know her bio dad, especially when he might not be here this time next year. That does not mean she loves or appreciates you and Christopher any less. Ask yourself if your resentment and discomfort for one day is worth your daughter’s resentment towards you for depriving her of this one clearly important memory with him.”

Another Redditor summed it all up perfectly, writing, “She isn’t a child, she understands the word terminal. I can sympathize with how you feel but we often think those we care about should feel the same as us but that isn’t reality. To you he’s the deadbeat who left you with a kid to raise but to her he’s the dad she’s always wanted to know. It seems they have a decent relationship now and there is not much you can do about it.”

They continue, “Have you spoken to him or at least his family to confirm his health status? This is crucial because if he really is on Death’s door and you deny her this memory it may damage your relationship with her. If there is some kind of trauma with associated with him then calmly explain this to her… she’s old enough now to understand this. But if it’s just anger (justifiable as it is) you and your husband should at least consider putting it to the side for one night for her. Soft YTA.”

It’s a complex situation, but from what the mom has told us, we have to agree — soft YTA, indeed.

Before you go, check out these unbelievable stories about Reddit’s worst dads.