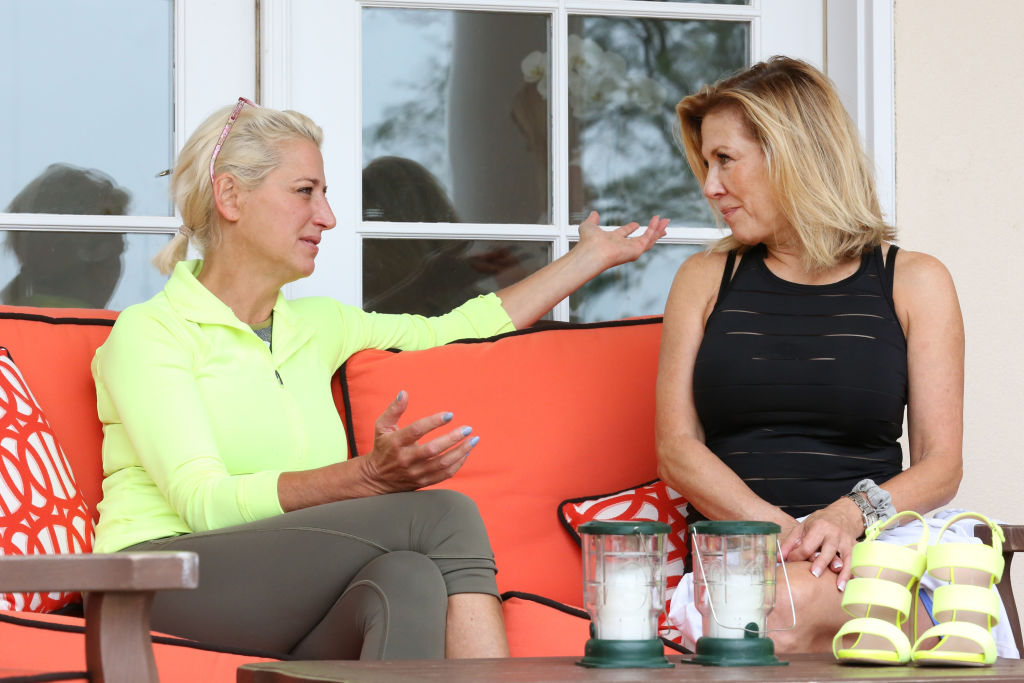 In the latest episode, Singer takes Medley and Sonja Morgan to a warehouse on Long Island to help her plan her birthday party. She acknowledges she left out “some” friends (the cast) last year. And while she wanted to right the wrong from last year, she also re-iterated a few times that she has 60 girlfriends.

But when Medley suggests Singer and Morgan throw a dual birthday party, Singer completely rejects the idea, insisting the party is about her and it’s (another) coming out as being single party. “Why not make it a joint birthday party,” Medley says in a confessional. “Sonja is your friend. Your real friend. And quite frankly Sonja needs it. I’m giving you an opportunity to be kind. Show a kind gesture.” Nevertheless, Singer isn’t having it.

Medley isn’t having it either

During the episode, Medley was on fire, tweeting about Singer’s selfishness during the episode. “True @ramonasinger ‘dumb dumb dumb’ let’s watch the privet to covet herself! #bully,” she wrote.

Morgan was flummoxed about how Singer initially seemed to be very inclusive about her party, but then suddenly pivoted to making it be all about her. “Privet ‘my friend’ @ramonasinger You did exactly who you are,” Medley remarked on Twitter. Adding, “Thank you for your support you truly showed who you are.” And “Let’s watch @ramonasinger privet she is not a girls girl she’s an opportunist.”

RELATED: ‘RHONY’: Is the Cast Sick of Ramona Singer Constantly Having to Be the Center of Attention?

Medley also tweeted about how Morgan has been nothing but a good friend to Singer and that Singer only looks after herself. “We don’t gather people we have friends! Real friends,” she added.

Singer also breaks the fourth wall in the mid-season trailer

Medley also pointed to Singer during the midseason trailer. “Promo Promo Promo @ramonasinger hmmmmm figure it out folks!” she tweeted. Singer insists (possibly that Medley) needs anger management in the trailer. Even Morgan screams at Singer about how her fake friends will never be there for her, but they will.

The tension witnessed between McSweeney and Singer on social media is also apparent as cracks begin to form in their relationship. During a party, Singer is clearly upset (perhaps about McSweeney) and orders the cameras “down.” McSweeney screams, “You’re being psychotic!”

RELATED: ‘RHONY’: Dorinda Medley Says Ramona Singer Is ‘Terrible to Her Fans’ After Being Told She Needs Anger Management

Singer and Medley are sparring quite a bit this season. Singer showed up on Watch What Happens Live with Andy Cohen and remarked that Medley needed anger management. Medley shot back on Twitter. “@ramonasinger I need anger management! You’re terrible to your fans, friends, and wait staff. Watch Bravocon!! Ask @SlaineElyse @CynthiaBailey10 @Jillzarin @KenyaMoore @SonjatMorgan just a few #leahmcsweeney #waitstaff #fans List is too long to tweet! Get Help!”

Medley also jabbed at Singer for seemingly not taking COVID-19 seriously. Singer shared a photo of her stylist doing her hair before her WWHL appearance. Her stylist is wearing a mask, however, Singer is not. Later Singer shared a photo where she pulls down a mask from her face. Medley replied, “Why you wearing a mask now? First time #damagecontrol.”