Rising sea levels over the past 120 years are a result of man-made climate change and NOT variations in the Earth’s orbit, study shows

Rising sea levels over the past 120 years are a result of man-made climate change and not variations in the Earth’s orbit, a study has found.

Over the last 66 million years, the Earth has both had ice ages and ice-free conditions — both caused by variations in Earth’s orbital properties.

However, sea-level rise has accelerated in recent decades, threatening to flood many populated coastal cities, communities and low-lying land by the century’s end.

This consequence of greenhouse gas emissions also poses a grave threat to many ecosystems and could generate costly damage to infrastructure. 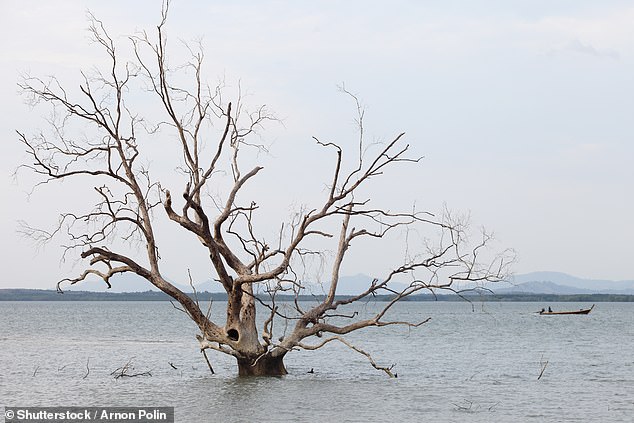 Rising sea levels over the past 120 years are a result of man-made climate change and not variations in the Earth’s orbit, a study has found

‘Our team showed that the Earth’s history of glaciation was more complex than previously thought.’ said paper author Kenneth Miller of Rutgers University.

‘Although carbon dioxide levels had an important influence on ice-free periods, minor variations in the Earth’s orbit were the dominant factor in terms of ice volume and sea-level changes — until modern times.’

In their study, the researchers reconstructed the history of sea level changes and glaciations since the age of the dinosaurs ended, around 66 million years ago.

They compared estimates of the global average sea level — based on deep-sea geochemistry data — with continental margin records.

Continental margins, which include the relatively shallow ocean waters over a continental shelf, can extend out hundreds of miles from the coast.

The team discovered that periods of nearly ice-free conditions — such as was found 17–13 million years ago — occurred when atmospheric concentrations of the greenhouse gas carbon dioxide was not much higher than it is today.

Glacial periods were also found to have occurred at times previously thought to have been ice-free, including from 48–34 million years ago.

‘Ice volume and sea-level changes prior to human influences were linked primarily to minor variations in the Earth’s orbit and distance from the sun,’ he added. 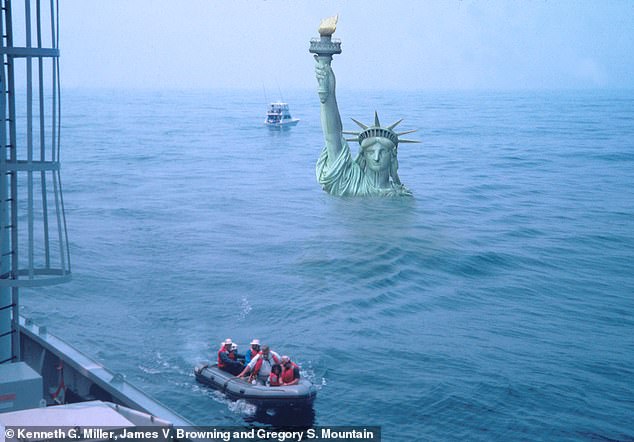 Sea-level rise has accelerated in recent decades, threatening to flood many populated coastal cities, communities and low-lying land by the century’s end. This consequence of greenhouse gas emissions also poses a grave threat to many ecosystems and could generate costly damage to infrastructure

The largest sea-level decline took place during the last glacial period, around 20,000 years ago, when the water level dropped by about 400 feet (around 122 metres).

The ream have concluded that sea-level changes were at a standstill until around 1900, but began rising as human activities began influencing the climate.

The full findings of the study were published in the journal Science Advances.

Global sea levels could rise as much as 10ft (3 metres) if the Thwaites Glacier in West Antarctica collapses.

Sea level rises threaten cities from Shanghai to London, to low-lying swathes of Florida or Bangladesh, and to entire nations such as the Maldives.

In the UK, for instance, a rise of 6.7ft (2 metres) or more may cause areas such as Hull, Peterborough, Portsmouth and parts of east London and the Thames Estuary at risk of becoming submerged.

The collapse of the glacier, which could begin with decades, could also submerge major cities such as New York and Sydney.

Parts of New Orleans, Houston and Miami in the south on the US would also be particularly hard hit.

A 2014 study looked by the union of concerned scientists looked at 52 sea level indicators in communities across the US.

It found tidal flooding will dramatically increase in many East and Gulf Coast locations, based on a conservative estimate of predicted sea level increases based on current data.

The results showed that most of these communities will experience a steep increase in the number and severity of tidal flooding events over the coming decades.

By 2030, more than half of the 52 communities studied are projected to experience, on average, at least 24 tidal floods per year in exposed areas, assuming moderate sea level rise projections. Twenty of these communities could see a tripling or more in tidal flooding events.

The mid-Atlantic coast is expected to see some of the greatest increases in flood frequency. Places such as Annapolis, Maryland and Washington, DC can expect more than 150 tidal floods a year, and several locations in New Jersey could see 80 tidal floods or more.

In the UK, a two metre (6.5 ft) rise by 2040 would see large parts of Kent almost completely submerged, according to the results of a paper published in Proceedings of the National Academy of Science in November 2016.

Areas on the south coast like Portsmouth, as well as Cambridge and Peterborough would also be heavily affected.

Cities and towns around the Humber estuary, such as Hull, Scunthorpe and Grimsby would also experience intense flooding.