Russian influencer, 35, announces she is pregnant with her 20-year-old stepson’s child – who she got engaged to following her divorce from his father, 45, after 10 years together

A Russian influencer has revealed she is pregnant with her stepson’s baby – after recently divorcing his father.

Marina Balmasheva, 35, recently announced she is engaged to her 20-year-old boyfriend Vladimir – having split from his father Alexey, 45, whom she was married to for 10 years.

Yesterday she shared an Instagram video of her sharing the happy news with Vladimir by handing him the positive pregnancy stick, after which they shared an emotional embrace.

She said she is only four weeks gone, and admitted they had decided to tie the knot due to the baby. 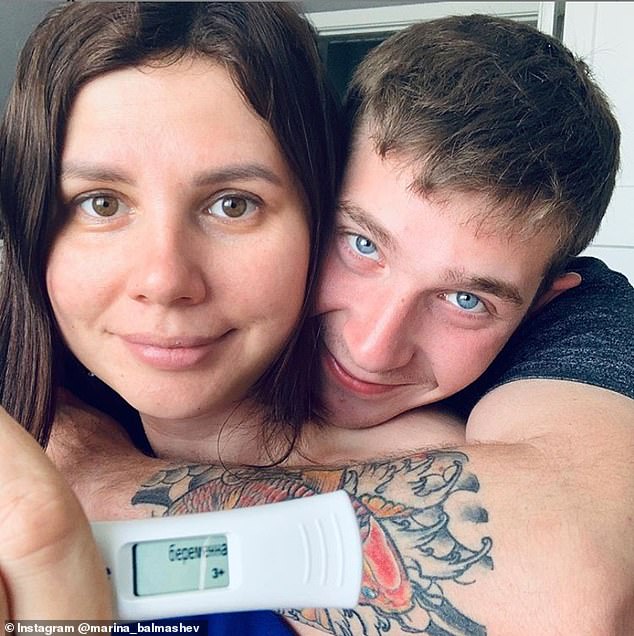 Marina Balmasheva, 35, revealed on Instagram she is pregnant with her stepson Vladimir’s baby – after recently divorcing his father 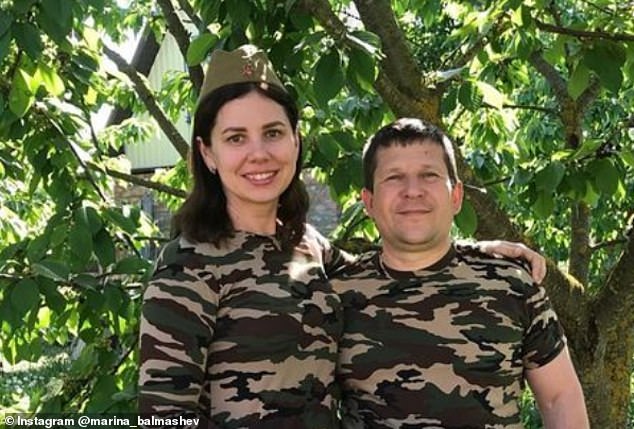 The popular Russian blogger is gearing up to marry her stepson after recently divorcing his father. Pictured with her former husband Alexey, 45

The translated post read: ‘[I’m] tired of hiding… Everything is possible in this world. We are four weeks and yes. That is why we decided to get married.’

While some fans reacted with heart emojis and wished her ‘happiness and health’, others were less positive about the news – and some appeared confused by who the father is.

Marina, who hails from the western Russian region of Krasnodar Krai, reportedly adopted her ex’s five children while they were together.

Last month she sparked outrage after sharing a photo of herself with Vladimir 13 years ago when he was aged seven. 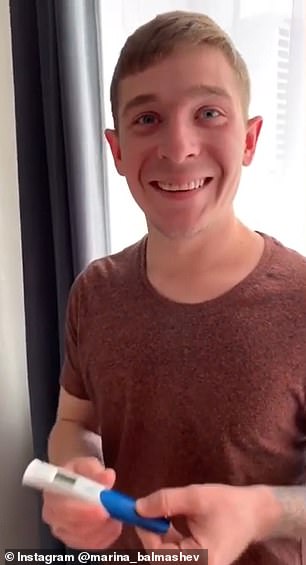 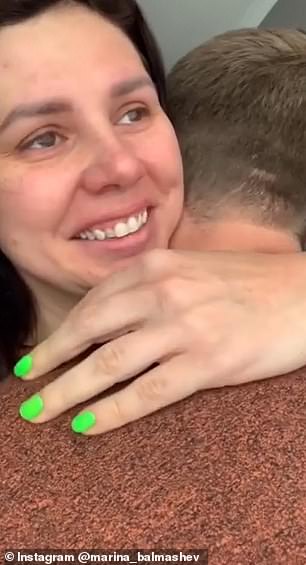 Yesterday Marina shared an Instagram video of her sharing the happy news with Vladimir by handing him the positive pregnancy stick, followed by an emotional embrace 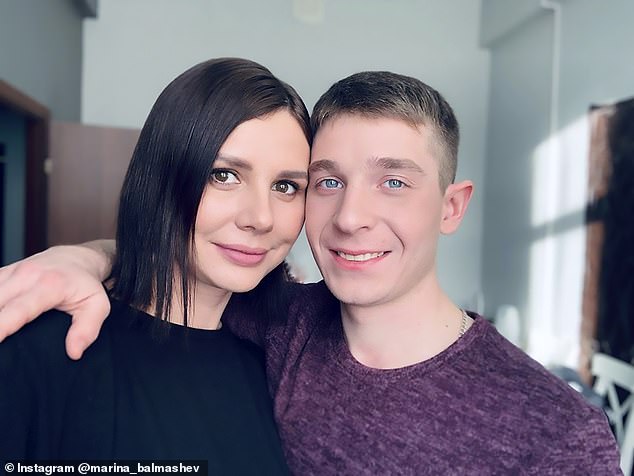 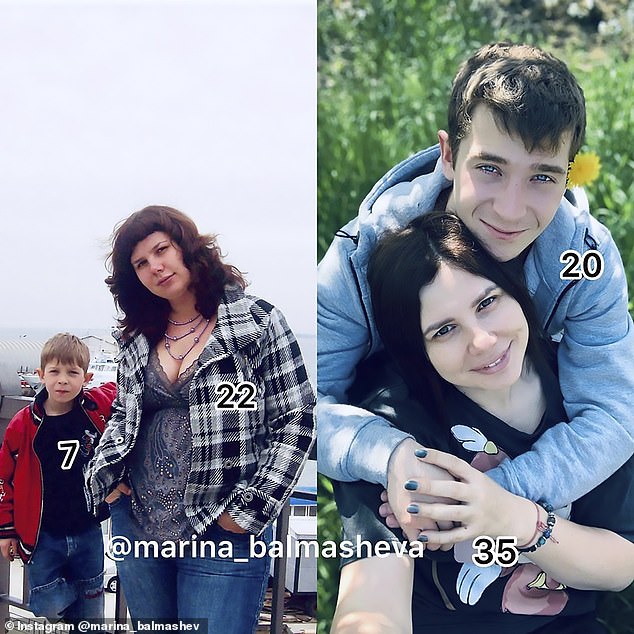 Marina Balmasheva, 35, who is marrying her 20-year-old stepson Vladimir, posted a photo of what they both looked like 13 years ago when her now-fiance was just seven (pictured left then, and right, now)

Alongside the photo, she included a more recent picture of the happy couple cuddling.

‘You never know how life will turn out and when you will meet a person who makes you smile,’ Marina wrote.

‘I know that some will judge us, others will support us, but we are happy and wish you to be as well.’

Instead of persuading people to support her, Marina attracted a storm of protest when she shared the before-and-after snap on Instagram with her 420,000 followers – which has since dropped to 411,000. 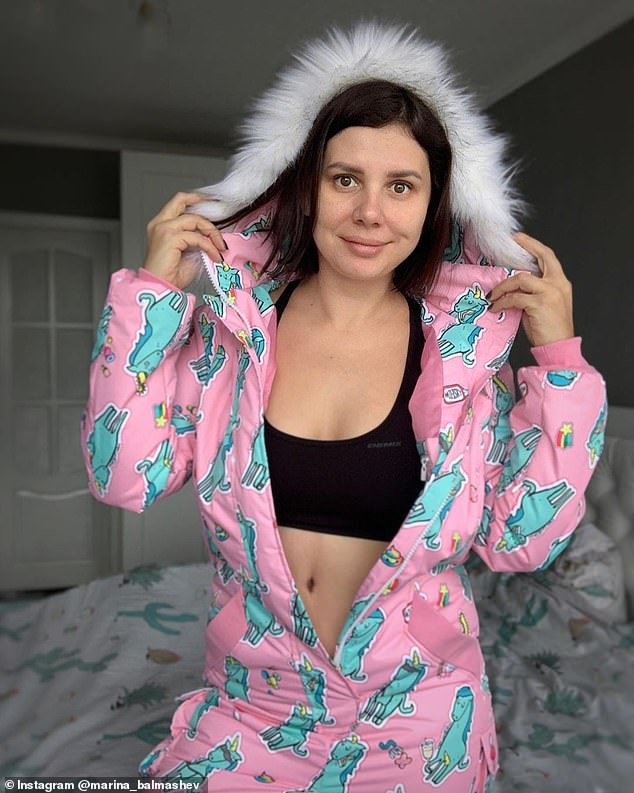 Many of Marina’s followers were shocked by her recent Instagram post and said it was immoral to start a relationship with the child that she had helped to raise. Pictured, the blogger 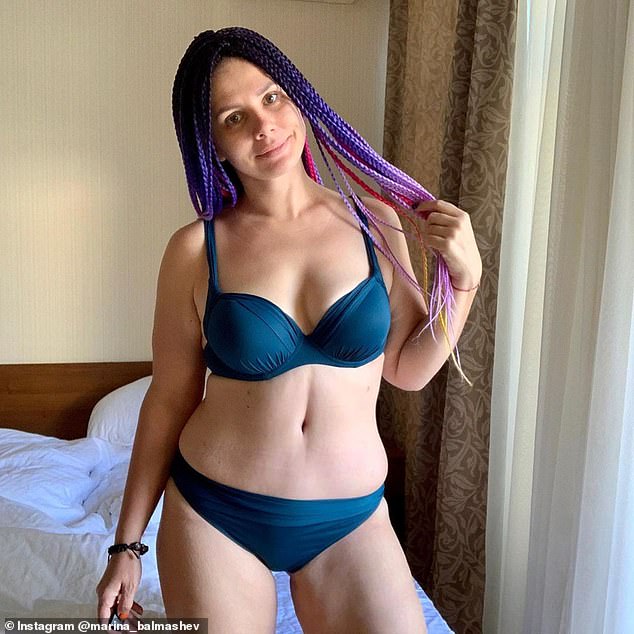 Marina added she is very much in love with Vladimir, and the couple are helping to raise three of his siblings, according to reports.

Many were left outraged following the post and said it was immoral to start a relationship with the child that she had helped to raise.

Instagram user SvetlanaNakhshumova commented: ‘What shocks me most is that this boy grow up before her very eyes.’

Others went on to make crude comments about her ditching an older man for a younger model.