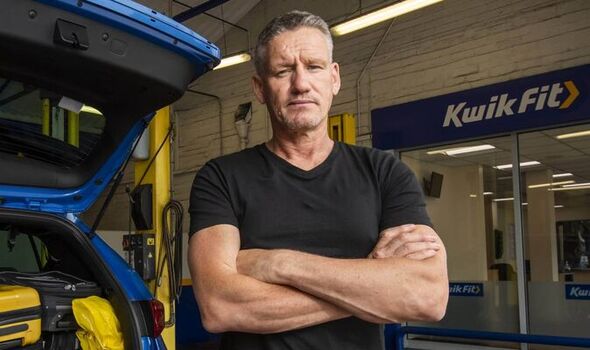 Some may also know that the highly decorated former special forces soldier worked as a bodyguard for Hollywood stars including Tom Cruise, Brad Pitt and Angelina Jolie, after leaving the SAS, which he refers to as The Regiment. But less well known is the fact he uses his TV profile to support charitable work across the globe, including training antipoaching forces in Africa to stop the vile trade in ivory to China.

South Africa and Zimbabwe, and has since worked in Kenya and the Democratic Republic of the Congo.

And multi-talented Mark is also a writer, and has used his recent experiences as inspiration for his second Matt Mason thriller, Survive To Fight, which is published on Thursday.

This sees Mason, who Billy admits is based on himself, training antipoaching forces on a game reserve in Kenya after leaving the SAS.

When Mason’s daughter Jo, who is working on a billionaire’s yacht in the Red Sea before joining the Navy, is abducted by Somali pirates he calls in favours from old contacts to get to her before it’s too late.

Billy, 56, says: “Anti-poaching training is something The Regiment gets involved with, particularly in Africa.

“I started getting into it while I was in the military and it was one of the first jobs I picked up while still serving and waiting to get out.

“I had a bit of time off and I ended up in Kenya, going out and training the anti-poaching teams through an ex-Regiment guy who was already out there.

“They were amazing, it was about educating the people that this is theirs, it’s their back garden, this all belongs to them.

“When you get people to realise that, they become more passionate about stopping poaching.”

The father-of-six, who is more open and engaging than his TV persona during a video call to his home in Herefordshire, explains that the global trade in ivory taken from elephants and rhinos is so lucrative the poachers are often better equipped than those guarding the animals.

He says: “In my new book there is a scene where Matt Mason is in a big fire fight with poachers, almost like he would be out in Iraq. I tell you why, because that is what it is like now.

“The last time I did a proper three-month stint of training I was in the Congo, in Garamba National Park, and the poachers had better kit than we did.

“They had helicopters, they had better weaponry, better clothing and night vision.

“The world of animal poaching has changed. It is no longer a guy setting a trap, catching an animal illegally by sneaking around, or walking through a park with a pump action shotgun.

“What they do now – and they were doing this in The Congo – is hunt the anti-poaching team first.

“Just before I went out to do this training four were killed.”

He adds: “We had real problems getting people to come and do this. Even paying them well they were saying ‘no, I don’t want to get killed’.

“The poachers we were going up against were ex-military-trained people from southern Sudan. They were tough people.

“I had to train the antipoaching teams to almost full-scale military operational hostile environment training. The only way to do this was to show they weren’t scared, that they are trained and ready, and were not going to walk away.”

One horrifying scene in the book sees Mason called to a watering hole where six elephants have been killed for their ivory tusks.

When I ask Billy if this happened in real life he visibly recoils and says: “That did happen, yes. The first time it happened was out in Kenya.

“Now you have mentioned it I can see the elephants I am talking about right now.”

He is currently tackling a disturbing trend of wealthy people paying large sums of money for baby wild animals like gorillas to keep in private zoos.

Billy, who ended nearly two decades in the SAS as a warrant officer class one, the highest rank for a noncommissioned officer, says: “I am actually working on a project right now. I can’t say too much about it but it’s to do with animal trafficking.

“People over this side of the world with lots of money want a couple of pet gorillas for example.

“You can’t blame the poachers – they are just poor people.

“So when a rich person turns up, generally a white guy, and goes ‘if you get me two gorillas I will give you US$50,000, that’s you and your family out of this poverty’, they are going to say yes. I’m going to get heavily involved in stopping this, getting in and exposing them’, doing the stings, hitting the right people.”

He adds: “No one thinks about this. How many people have private zoos, from film stars to millionaires? Why have they got their own tigers? Where do you think they came from?”

Billy grew up on a council estate in Walsall, West Midlands. After getting involved in gangs and being stabbed at the age of 15, he credits the Army with turning his life around.

After joining the Parachute Regiment in 1983, aged 17, he passed the selection process for the SAS in 1991.

He was appointed MBE for leading a mission to rescue a British hostage in Iraq and received the Queens Commendation for Bravery for capturing an IRA sniper by using himself as bait.

While not able to talk freely about his time in The Regiment in case it puts those still serving at risk, Billy says writing his memoir The Hard Way and now his Matt Mason thrillers has been therapeutic and brought him closer to his five daughters and son.

He says: “A few times I’d be out in Hereford having a few drinks with mates, mainly ex-Regiment mates, and my daughters would come and pick me up and they’d be waiting while I finished my beer and the guys would be telling stories like we do… do you remember this, that.

“But I remember one time – it was quite sad, really – my daughter was driving me home and she was really quiet, so I said, ‘Are you OK?’

“Because I thought she was annoyed that I kept her waiting, and she said, ‘Yeah, I’m fine, Dad, but do you realise us children don’t know who the hell you are’.

“She said ‘I have just listened to five or six stories that you have been involved in around the world and we know nothing about that. You have never told us anything’.

“I felt really bad about that and thought I really do want to capture that. So it has really helped with that connection.”

Billy met his wife Jules, an American fashion designer who is also a disaster responder, in Haiti after the devastating earthquake of 2010 that killed more than 220,000 people. They founded

Rebuild Globally together, a charity tackling poverty by providing education and jobs for young people at Deux Mains, an ethical fashion company run by Jules.

Billy says he will continue doing SAS Who Dares Wins for “as long as I can” and is already plotting his next Matt Mason thriller.

“The next book will follow the next trend in my life, so it will have some bodyguarding work.”