Scientists capture a star being devoured by a supermassive black hole

Death by ‘spaghettification’: Scientists capture a star being shredded into thin streams of gas as it is devoured by a supermassive black hole

The burst of light from a nearby star falling into a supermassive black hole — after being torn into shreds in a process called ‘spaghettification’ — has been recorded.

The mass of black holes can deform stars — like the moon deforms the Earth’s oceans to create tides — to such a degree that matter is pinched out into a thread.

This elongated stand of material is then sucked towards the black hole’s event horizon — emitting a bright light as it circles the hole and is devoured.

British-led researchers spotted the flare — the closest to Earth ever seen at just 215 million light-years away — early enough to witness the entire destructive process.

Over a six-month period, the flare — dubbed ‘AT2019qiz’ — grew brighter as more material was torn into the hole by extreme gravitational forces, before fading away. 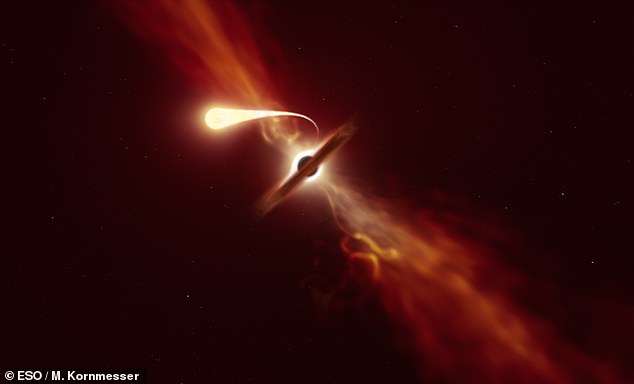 The burst of light from a nearby star falling into a supermassive black hole — after being torn into shreds in a process called ‘spaghettification’ — has been recorded. Pictured, an artist’s impression of the star (in white) being elongated towards the event horizon of the black hole

‘The idea of a black hole “sucking in” a nearby star sounds like science fiction. But this is exactly what happens in a tidal disruption event,’ said paper author and astronomer Matt Nicholl of the University of Birmingham.

‘We were able to investigate in detail what happens when a star is eaten by such a monster,’ he explained.

The researchers used observations taken by the Very Large and New Technology Telescopes in Chile, as well as the the Las Cumbres Observatory global telescope network and NASA’s Neil Gehrels Swift Satellite in Earth orbit.

Tidal disruption events are not only rare, but also typically hard to study, the researchers explained, as the very process of destroying a star forms a cloud of dust and debris that shrouds the black hole from view.

‘When a black hole devours a star, it can launch a powerful blast of material outwards that obstructs our view,’ said paper author and Samantha Oates, also of Birmingham.

‘This happens because the energy released as the black hole eats up stellar material propels the star’s debris outwards.’

‘The observations showed that the star had roughly the same mass as our own Sun, and that it lost about half of that to the black hole, which is over a million times more massive,’ added Dr Nicholl.

‘Because we caught it early, we could actually see the curtain of dust and debris being drawn up as the black hole launched a powerful outflow of material,’ explained paper author and astrophysicist Kate Alexander of Illinois’ Northwestern University.

‘This unique “peek behind the curtain” provided the first opportunity to pinpoint the origin of the obscuring material and follow in real time how it engulfs the black hole.’

The researchers were able to confirm for the first time the direct link between the material flowing out of the star and the bright flare emitted as such was engulfed into the black hole.

The full findings of the study were published in the journal Monthly Notices of the Royal Astronomical Society. 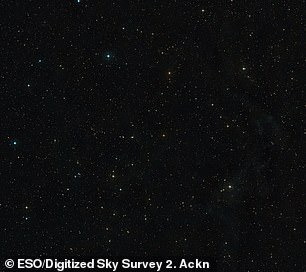 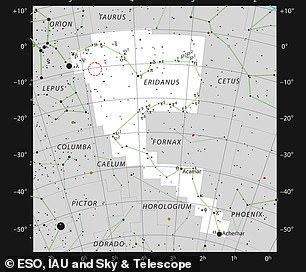 Over a six-month period, the flare — dubbed ‘AT2019qiz’ — grew brighter as more material was torn into the hole by extreme gravitational forces, before fading away. Pictured, the location of AT2019qiz in the night sky

Black holes are so dense and their gravitational pull is so strong that no form of radiation can escape them – not even light.

They act as intense sources of gravity which hoover up dust and gas around them. Their intense gravitational pull is thought to be what stars in galaxies orbit around.

How they are formed is still poorly understood. Astronomers believe they may form when a large cloud of gas up to 100,000 times bigger than the sun, collapses into a black hole.

Many of these black hole seeds then merge to form much larger supermassive black holes, which are found at the centre of every known massive galaxy.

Alternatively, a supermassive black hole seed could come from a giant star, about 100 times the sun’s mass, that ultimately forms into a black hole after it runs out of fuel and collapses.

When these giant stars die, they also go ‘supernova’, a huge explosion that expels the matter from the outer layers of the star into deep space.