A secret marketing strategy to convince Australians to support a controversial overhaul of the National Disability Insurance Scheme (NDIS) says the federal government must be “seen” to have listened to concerns of disability groups, who will be targeted with an extensive campaign.

A leaked communications and engagement strategy from the National Disability Insurance Agency (NDIA), which administers the $26 billion scheme, reveals an aim to announce a legislation date in late August. It also aims to combat any backlash from the disability community through what Labor calls an “expensive multi-media spin campaign”. 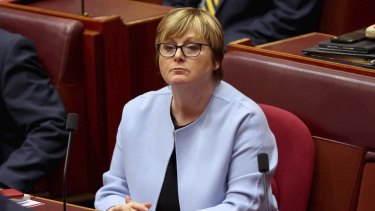 The federal government has faced fierce community backlash over its plan to require independent assessments for all participants to re-evaluate their eligibility for the scheme and the level of support and funding they receive. In the biggest reform to the scheme since it began, the assessments will be conducted by a panel of private providers such as psychologists, occupational therapists, physiotherapists and speech pathologists – but not the person’s usual therapists.

NDIS Minister Linda Reynolds announced in April she would pause the contentious reforms amid growing concern from the sector and concerns from several state governments over the handling of the changes.

She had promised to wait for the outcome of trials and consult with the disability community before legislating the changes.

The leaked strategy, obtained by The Sydney Morning Herald and The Age, is aimed at helping the government implement independent assessments but concedes NDIS participants have “demonstrated strong, orchestrated opposition” to them.

“There are ongoing risks if the Agency is not seen to have made changes in response to concerns raised in the consultation,” the report says.

“Sentiment has decreased with some stakeholders from neutral to negative as further details of the reform have been released or with increasing dissatisfaction of scope of consultation.”

The documents detail an “extensive and targeted” government campaign to tackle opposition from the disability sector to the proposed changes.

It reveals the key messages for the agency and the government as part of a “ministerial reset” to tell stakeholders the government was “taking more time to listen and consult further” and “improving our approach”.

The documents reveal a marketing campaign – titled ‘We Did’ – is the government’s key platform to push the message that it listened and acted on participant and sector concerns. It proposes strategies to respond to any concerted campaigns designed to influence senators or MPs to vote against the changes.

Opposition NDIS spokesman Bill Shorten said the leaked documents exposed a plan to “dupe” people with disabilities and steamroll through the controversial changes while “faking consultation”.

“The documents make it clear current consultation with NDIS participants and stakeholders is nothing but a sham. Minister Reynolds has made up her mind what changes she wants to push through despite telling participants and the sector she will listen to their concerns,” Mr Shorten said.

“Instead of outsourcing highfalutin communications strategies, the Morrison government should stop, genuinely listen and learn from lived and expert experience.”

An NDIA spokeswoman said the agency developed a communications and engagement plan in support of the ongoing consultations with the sector around scheme changes.

She said We Did was not “an expensive marketing or advertising campaign” but designed to demonstrate how feedback gathered through the consultation process has been incorporated into the policy design.

“The Minister and the NDIA have been very clear in acknowledging the concern and fear in the disability community particularly around Independent Assessments. Participants can be absolutely confident that the Minister is listening to their concerns and has already indicated changes will be needed,” she said.

Senator Reynolds said this week she was committed to the plan but acknowledged it faced an uphill battle to pass the Senate, with Liberal senator Hollie Hughes among its fiercest opponents.

“The reason I’ve put a pause on this legislative process is so that I can do what I’m doing. I’m consulting with groups all round the nation to hear from them,” Senator Reynolds told Paralympic gold medallist and disability advocate, Kurt Fearnley, on his podcast A Nation Changed.

Senator Reynolds rejected calls from some in the sector for the assessments to be optional, telling the podcast she believed if they were not compulsory it would not be a fair system.

“So much of the feedback that I’ve had so far is that people are not seeing that it is consistent or fair,” she said.