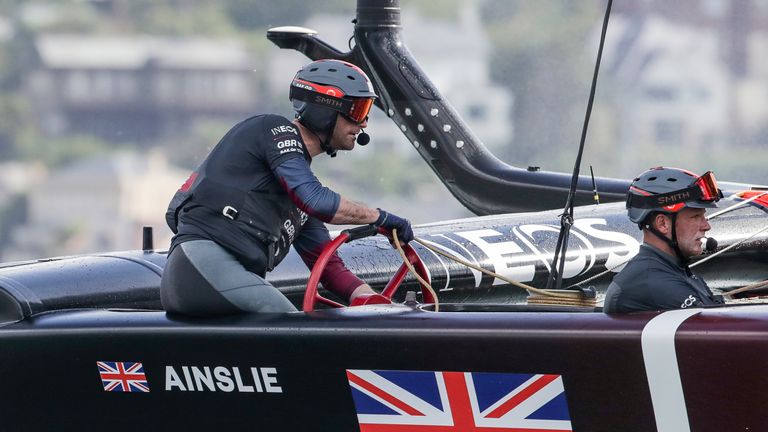 There are a few usual courtesies and niceties when jumping on a Zoom call: “How is the weather where you are?” Whereas I’ve enjoyed a balmy 14 degrees Celsius in London, my interviewee is in Bermuda.

Nope, not scorching temperatures as you might expect. Apparently, it’s been pretty wet and windy, which really isn’t ideal when you’re a sailor.

Still, it’s not a bad place to rest and recuperate, especially when you’ve been involved in a gruelling, intense America’s Cup campaign. Sir Ben Ainslie isn’t here on holiday, though.

Fresh from the Prada Cup defeat to Luna Rossa, his focus is now switching to season 2 of SailGP, where high-performance F50 foiling catamarans representing eight national teams race in eight grand prix around the globe.

The four-time Olympic gold medallist is helmsman of the Great Britain SailGP Team, having had his 2020 tilt curtailed by Covid.

And while Ainslie was affected by the pandemic last year, throughout his career he’s been witness of another pandemic, of sorts. Sailing is one of the sports which is most greatly impacted by climate change, and Sir Ben has seen it first-hand in his extensive travels.

“In some of the countries in the Asian regions and perhaps some areas in South America, you see a lot more pollution in the water. A lot of that comes down to the responsibility of the regional governments to really push environmental standards.

“But you really see it with the weather conditions changing as they do around the world. What we would expect for normal sailing conditions 10 or 20 years ago is very different now,” he says. Extreme weather patterns are one of the clearest indicators of greenhouse gases in the atmosphere.

This season, there are four Olympic champions competing who have secured 10 medals during their combined 14 Olympic appearances.

Like any sensitive human being with an acute awareness of the world around him, Ainslie recognises that this type of race is very different. It’s against time, rather than against a direct adversary. And time, unlike the vast expanses of water which are his natural and competitive environment, is in increasingly short supply in a climate emergency.

Enter SailGP, with its own #RaceForTheFuture sustainability strategy. From the outset, it has set ambitious goals to use its global platform to combat the climate crisis in its own way, on its own terms.

So much so, in fact, that it is emboldened enough to call itself “the first climate positive sport and entertainment property”. Fiona Morgan, Global Director of Impact and Purpose at SailGP, is confident that the series will stand up to scrutiny.

“SailGP was founded to make the sport better and use the power of sport for good. We are a new challenger sport with purpose at the heart and want to make a difference,” she insists.

But this really is a step beyond the norm. Their plan is executed on many different levels, and as SailGP distil it, on water, on-shore and in cities with a 2025 deadline.

It’s everything from transitioning to low-carbon propulsion systems on the series’ support fleet, to shifting to clean technologies, to tangible effects with local partners and impact projects in the eight venues where the teams will be racing.

SailGP is the first climate positive global league, which means that they will remove more carbon than their footprint leaves.

For Morgan, this latter element is one of the most impactful ones. “This season all our teams have their own purpose and goals around a problem they want to solve in the world,” she continues.

“They are partnering with like-minded NGOs and foundations to drive change, and we have some really exciting partners to announce. For example, France SailGP Team have just announced their partner, Energy Observer Foundation, who are working with them and the league to help accelerate the transition to clean energy.”

And there are further real-world actions taking place to more than offset any carbon that the series hasn’t eliminated, such as the planting of mangroves to help to maintain or restore critical shoreline ecosystems that sequester carbon, accounting for 500 million tons of carbon dioxide in the atmosphere and investing in U.N renewable wind and hydro projects in developing countries.

In short, SailGP isn’t just reducing the harm it does to the planet, but it is actually directly improving the Earth’s health. Climate positive impact. In the same way as science is showing us the way out of the coronavirus pandemic, tech and innovation are key in this latest of global battles.

“The technology is absolutely critical, finding practices to be able to recycle plastics back to their virgin state for example,” adds Sir Ben. “There’s so much that technology can do that can help us be more efficient and find those solutions for a cleaner, greener, sustainable future.”

There’s real creativity in evidence here too. In season 1, recycled vegetable oil was used and a solar-storage temporary power solution implemented for battery charging, and SailGP ensured that waste material from the F50 catamarans was reused in the manufacturing of future race boats. 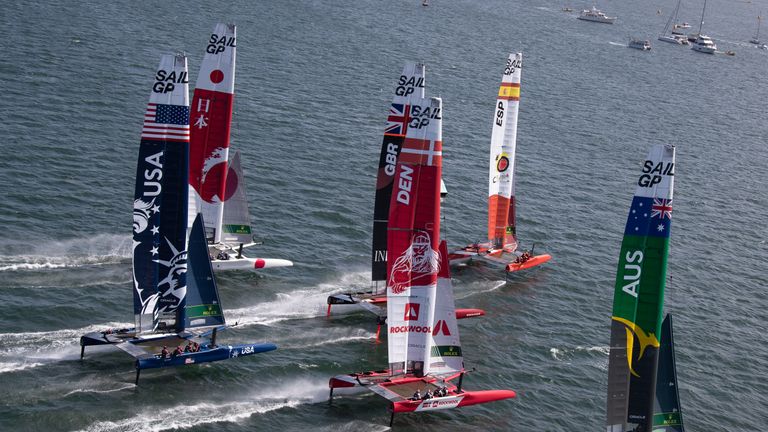 However, there’s one source more powerful than all of those, and that’s athlete power, and their ability to positively influence legions of fans.

All the teams are boosting this element by adding female athletes to their respective programmes in 2021, and first up for the Great Britain SailGP Team in Bermuda is Hannah Mills, herself an Olympic champion in the women’s 470 class in Rio and an impressive advocate for climate action and ocean health.

“Hannah is an inspiration for many and this season we have the best athlete line-up in our sport, which will see incredible rivalries on and off the water. I think their affinity to the ocean is something that makes our sport unique and such an authentic platform.”

That penultimate word is vital for Ainslie. Being Britain’s greatest ever Olympic sailor, a man who has collected honours (and ultimately his knighthood) with the same regularity as his four gold medals between 2000 and 2012, gives him the ability to engage with his fans on an important topic.

But the most important thing is that the message is truly meant: “If you look at Lewis Hamilton, Marcus Rashford…those are two individuals that have really had a cause, they have really stuck their neck out and done so in a meaningful and genuine way.

“As sportspeople, if you find something you genuinely believe in that you can impact and set standards for the future, absolutely there’s a responsibility to do that, but it has to be a genuine response, and setting those standards has to be achievable and realistic.”

If authenticity is one thing to encourage engagement from a young audience, but then so is an exciting product – it simply has to grab eyeballs. On this, Ainslie is even more sold: if SailGP is to convert the watching masses to sustainability, it’ll do so through the spectacle of sport.

“If you’re not necessarily a sailing fan and you’re thinking ‘what the heck is SailGP?’, you’ll be pretty blown away when you see the performance of these boats on the courses that we’re racing on, and the level of skills of these sailors,” he says.

“You have undoubtedly the best sailors in the world in an amazing craft in the F50, sailing at speeds of close to 100 kilometres an hour. That’s Formula 1 on water, and it’s got plenty of wow factor.”

So put all those things together and what about the prospect of meaningful, lasting change in the battle to beat the climate crisis? Again, no doubt in Ainslie’s mind:

“Absolutely. Covid has proved to people that change is possible. It doesn’t mean that everything’s suddenly going to necessarily collapse on you and I would like to think it’s opened people’s eyes to [asking] ‘how we can change our practices with regards to the environment and sustainability?’ to have the impact that’s necessary.

We've waited over a year for this.

Our F50s are starting to hit the water in Bermuda. #SailGP pic.twitter.com/gE6IVSM848

“So out of all of these unbelievably difficult times for so many people, I think there’s a ray of sunshine perhaps helping us to change our practices and our lifestyles for the better.”

Ah yes, the sunshine. Sir Ben had better make the most of it in Bermuda on Saturday, because the forecast is for scattered thunderstorms on Sunday, as he embarks on his first full season in SailGP.

The course of the climate comeback might not run smooth, but this competition is determined to prove it will absolutely be worth every effort along the way.