Sky Tempesta Racing will take the next step in the young British team’s development with new goals and new challenges in its second full year of the GT World Challenge Europe, which starts this weekend at legendary Monza.

The team enjoyed a breakout 2020 season in which they claimed title honours in the sportscar series’ Pro-AM class, both for the sprint rounds and the overall championship.

The first round of the 10-round championship starts in Italy at motorsport’s ‘Temple of Speed’, with the Three Hours of Monza opening the season’s endurance rounds. Highlights will be shown on Sky Sports F1 at 9pm on Monday.

Round two at Magny-Cours in May represents the first of the shorter sprint events – and that’s where Sky Tempesta will begin a fresh challenge by stepping up to the Silver Cup class as the reigning Pro-Am victors.

British driver Chris Froggatt – who will contest both elements of the championship – believes the time has come to take on an increased challenge of competition.

“The reason for doing silver in sprint is to put myself under more pressure,” said Froggatt, who began his racing career just five years ago.

“When I was in Pro-Am I was racing against the bronze drivers and I feel like I wanted to put myself under more pressure because we plan in the future to enter a car for a line-up at Le Mans, which would require a gold, a silver and a bronze driver.

“There are a lot of a silver-graded drivers that are as good as any gold or platinum driver. I also want to be more of a lead in the car, which is a role I wanted.”

Joined by a new team-mate in experienced Italian Giorgio Roda for the sprint rounds, Froggatt acknowledged: “It’s going to be a very tough championship.

“The Silver Cup win the overall races quite often but I’m hoping it will make me stronger long term, so I’m happy to be under pressure for it.

With a tentative goal of heading to the Le Mans 24 Hours by 2023, Froggatt says experience between now and that eventual entry will be invaluable for both himself and the team.

“I need a couple of years with the pressure [of the silver cup],” added Froggatt. “I’m always going to try and fill the role of the silver driver from now on.

“Obviously we don’t want to not be competitive in the Silver Cup, but we understand that’s a lot more of a challenge. So the real aim of the team is to win the endurance championship.” 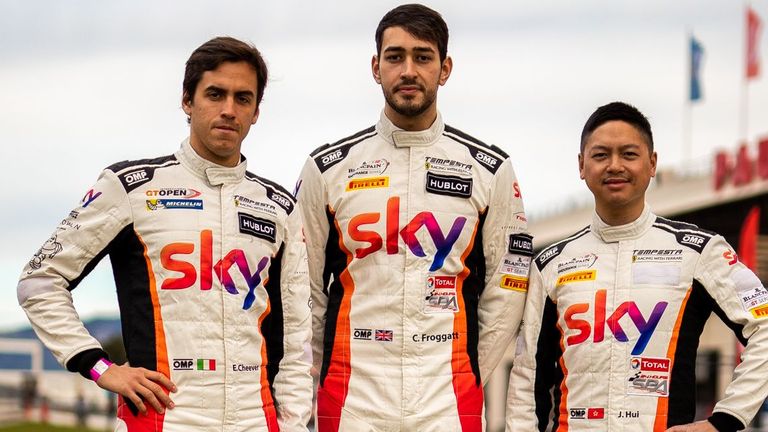 And it’s the series’ showpiece of the Spa 24 Hours that remains the big goal.

Pipped to Pro-Am victory in 2020 after a strong showing for the four-man team of former F1 winner Giancarlo Fisichella, Eddie Cheever III, Jonathan Hui and Froggatt – a line-up that will go again at this September’s Spa race – the Belgian event clearly represents unfinished business.

“We had an almost perfect race last year and it was all down to luck in the end, so let’s hope we can replicate a similar performance and the luck swings our way,” says Froggatt.

“That really is a race we want to win. That’s a real ambition this year, to win Spa.”

Follow Chris and the Sky Tempesta team’s progress on Sky Sports F1 through the year.