A welly good day out! Sophie Wessex dons her country casuals as she visits a Devon farm with Princes Edward and pets some adorable lambs

The Countess of Wessex looked the part this afternoon as she donned her wellies for a day in the Devon countryside for a farm school visit with her husband Prince Edward.

The mother-of-two and her husband were introduced to pupils and staff at the farm school in Newton Abbot, which works with young people living in challenging circumstances to teach them practical farming skills.

The Countess of Wessex, sported a brown smock top and cream trousers as she visited East Shallowford Farm today, pairing her ensemble with a green military-style jacket and Ariat wellington boots, for a visit to a farm school in Devon 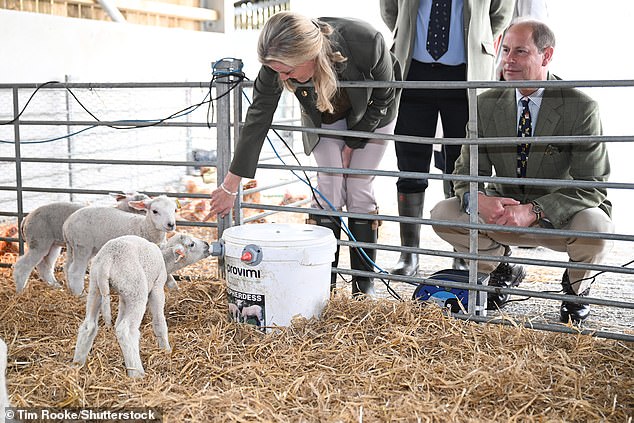 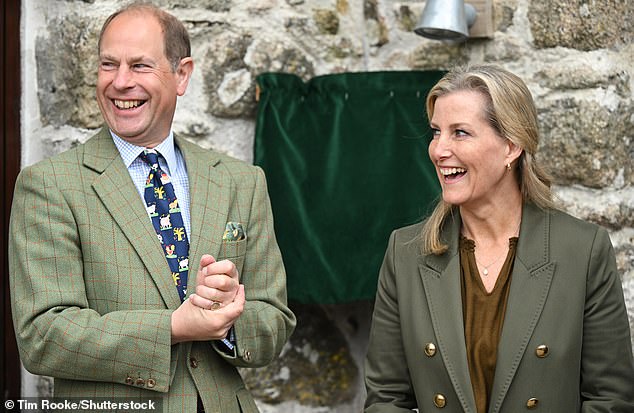 The pair, pictured, appeared to be sharing a joke as they laughed together, with both grinning from ear to ear

As she walked around the farm, she opted for simple makeup and gold hoop earrings, sweeping her hair into a half ponytail.

The royal couple are due to take part in activities at Shallowford with the pupils including feeding the animals, bird box making and dry-stone walling.

The 57-year-old was also photographed holding a tiny frog, looking thoughtful as the animal nestled in her hands.

Sophie smiled as she greeted staff and young people at the farm. 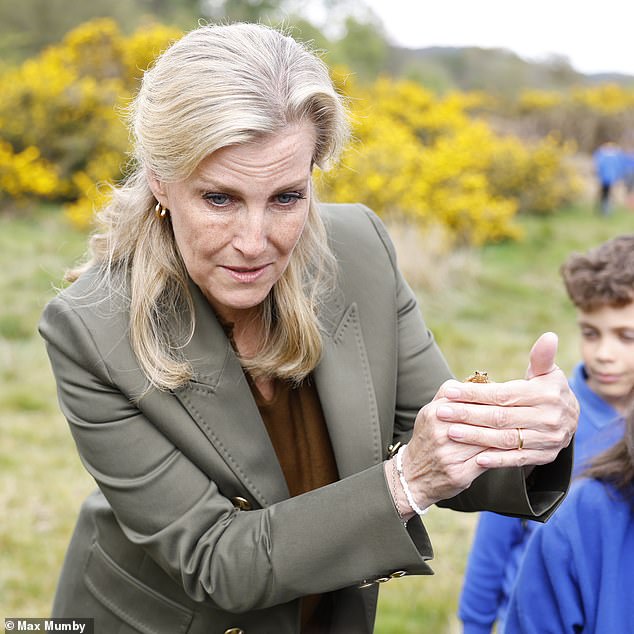 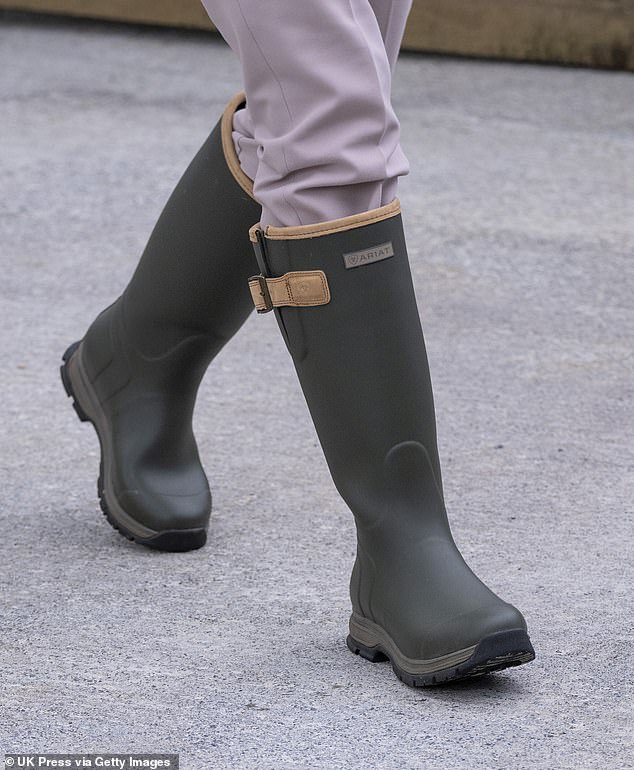 The mother-of-two paired the smart top and trousers with a green military-style jacket and Ariat wellington boots, pictured

The couple opened the East Shallowford Farm Development Project and leant down to stroke some sheep and held out their hands to feed them.

Sophie and Edward also spoke to some of the pupils about their experiences of the farm.

They also appeared to be sharing a joke as they laughed together, with both grinning from ear to ear.

And they were snapped listening intently during their visit to the farm. 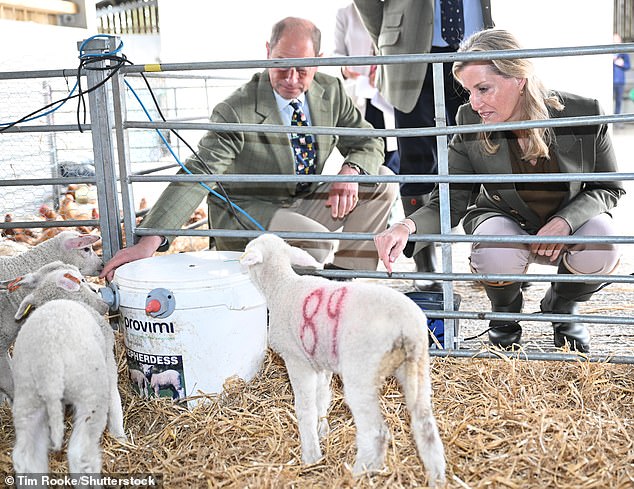 The couple, pictured, leant down to stroke some lambs while at the Devon farm 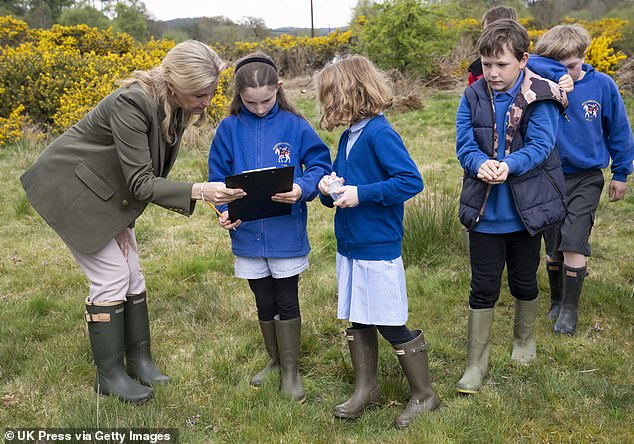 Sophie, pictured, leans to look at an activity sheet with pupils at the farm school

It comes after the Wessexes return from their Caribbean tour, which saw them visit spots such as St Lucia. 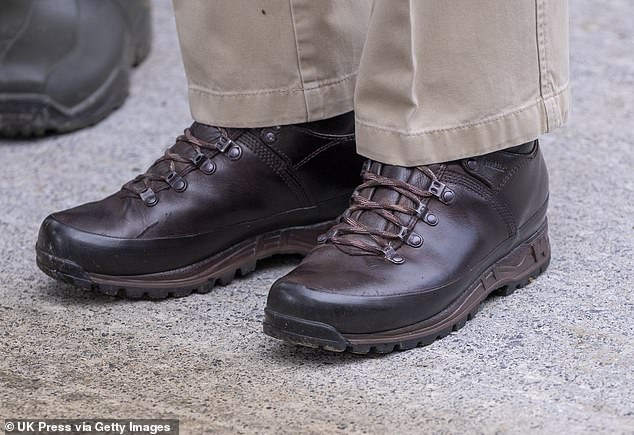 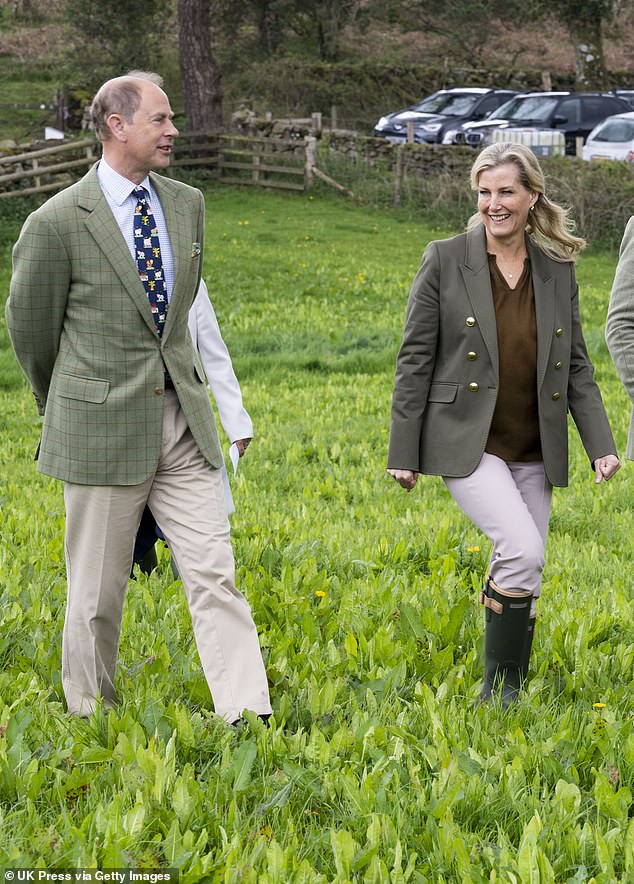 The couple, pictured, grin as they continue their tour of the farm in Newton Abbot today 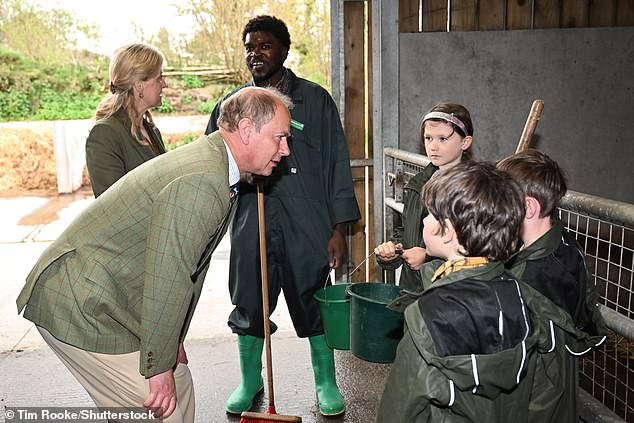 Sophie and Edward, pictured, also spoke to some of the pupils about their experiences of the farm

The Earl and Countess of Wessex received a mixed reception during their visit to Saint Lucia – with the Queen having been urged to apologise by Caribbean protesters seeking reparations.

Edward and Sophie initially received a warm welcome to the island during a walkabout in the town of Soufriere, but were soon met by a group of around 10 protesters before a trip to a cocoa plantation. 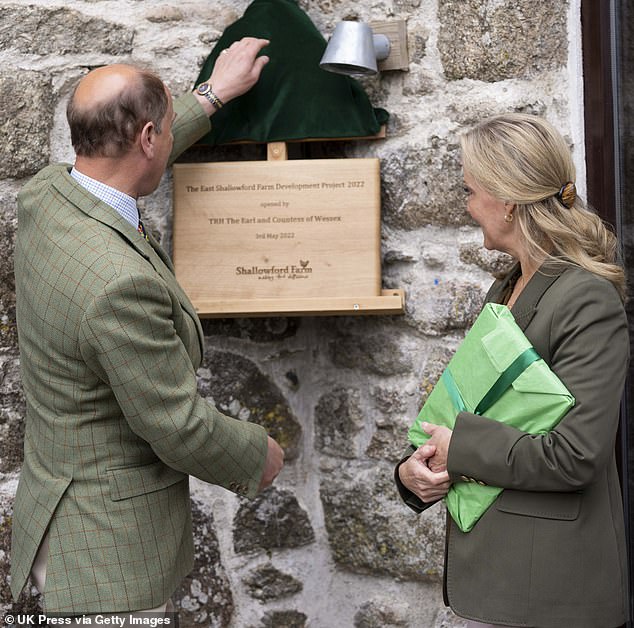 Sophie and Edward, pictured, unveil a wooden sign which marks their opening of the East Shallowford Farm Development Project 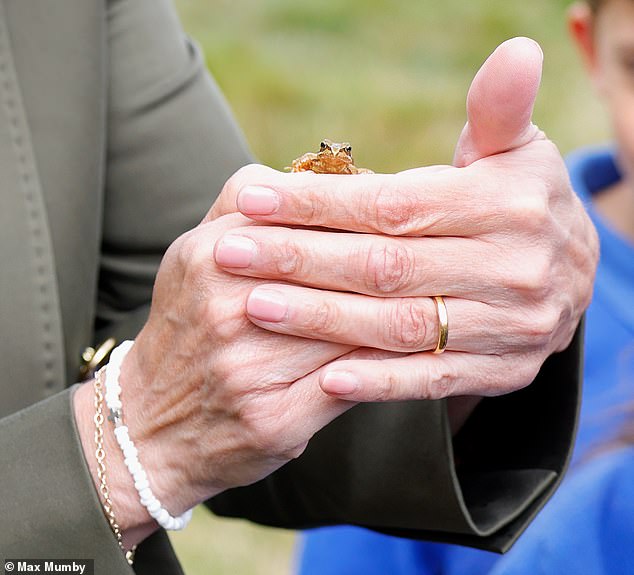 The 57-year-old, pictured, was photographed holding a tiny frog, which nestled in her hands at the farm 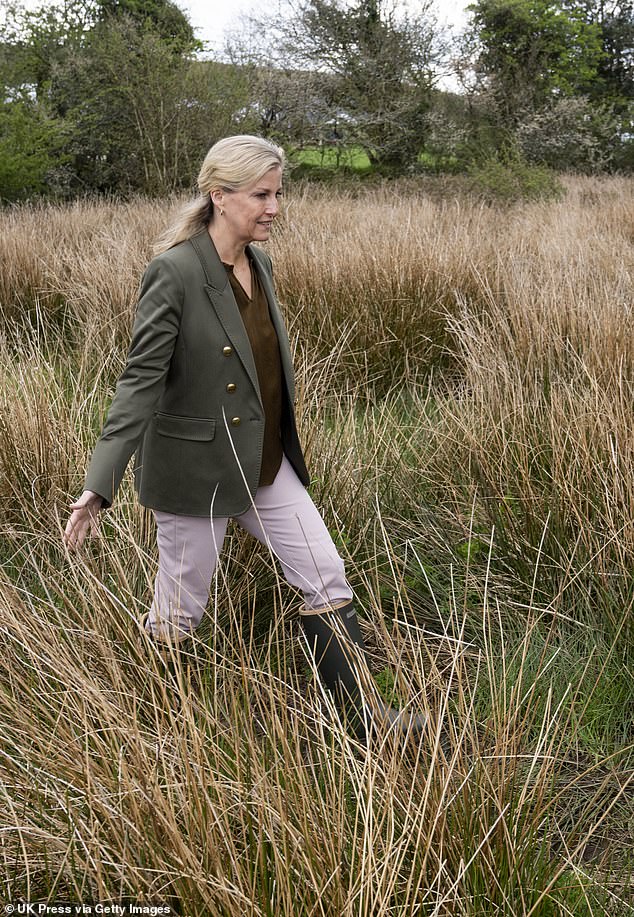 Sophie, pictured, walks through the vast expanse of greenery during the farm visit in Devon today

One protester said: ‘We want reparations now. The Queen of England needs to apologise for slavery.’ Another smiled and said: ‘London Bridge is falling down.’ 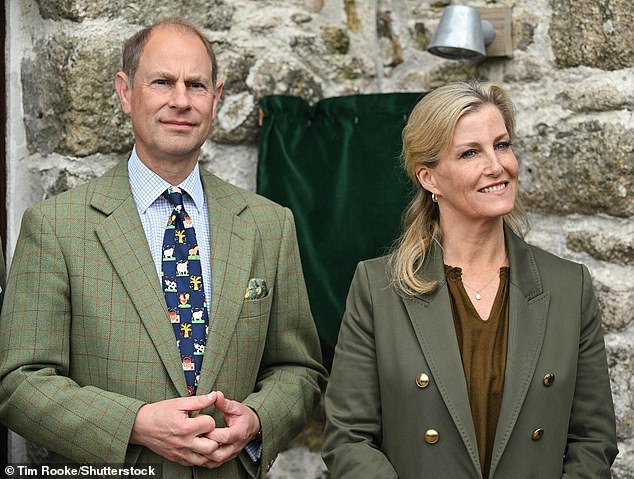 And Sophie and Edward, pictured, were snapped listening intently during their visit to the farm 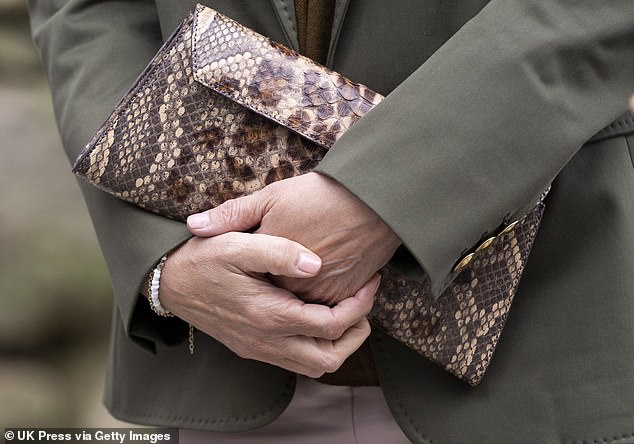 The Countess of Wessex, pictured, holds onto a snakeskin clutch bag during her visit to the farm today

Sophie and Edward initially experienced the warmest welcome they had received on their Caribbean tour during a walkabout in the town of Soufriere, with one man saying to Edward: ‘I salute you, my prince.’

The earl spoke to a road sweeper with a broom who was standing in front of the small crowd, and joked ‘I hope you keep this lot in order’ while pretending to wave the broom. Sophie and Edward were cheered as they left the area.

The protests followed similar demonstrations in St Vincent and the Grenadines, where some held signs saying ‘compensation now’ and ‘Britain your debt is outstanding’.

The earl and countess were also urged to use their ‘diplomatic influence’ to provide ‘reparatory justice’ by the prime minister of Antigua and Barbuda during a visit to the country on their tour. 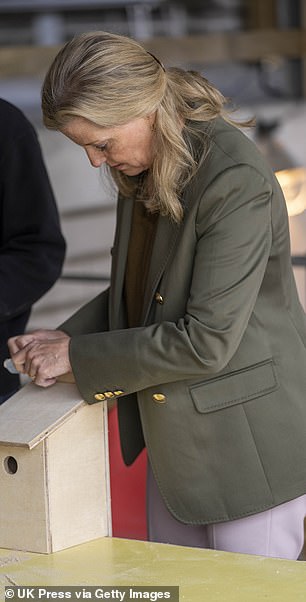 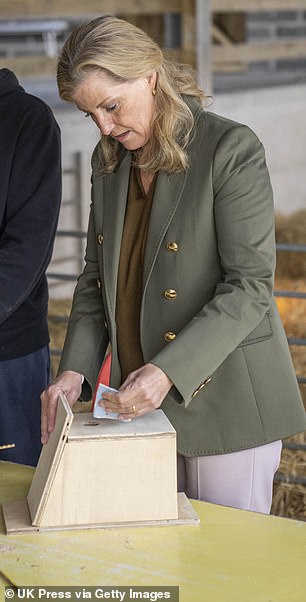 Sophie, pictured, gets crafty as she participates in a woodwork class at the farm today 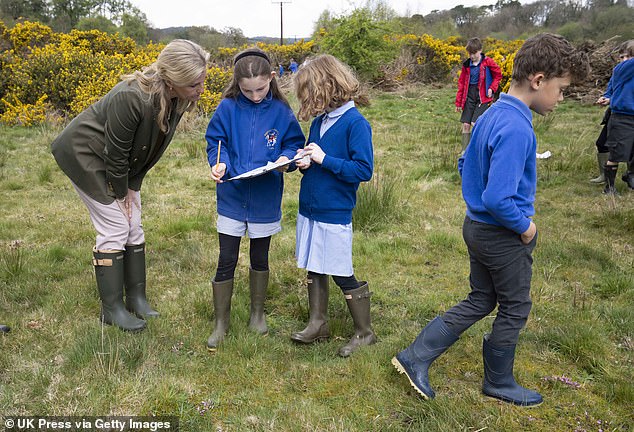 Sophie, pictured, kneels to look at a clipboard and help two pupils at the Newton Abbot farm today 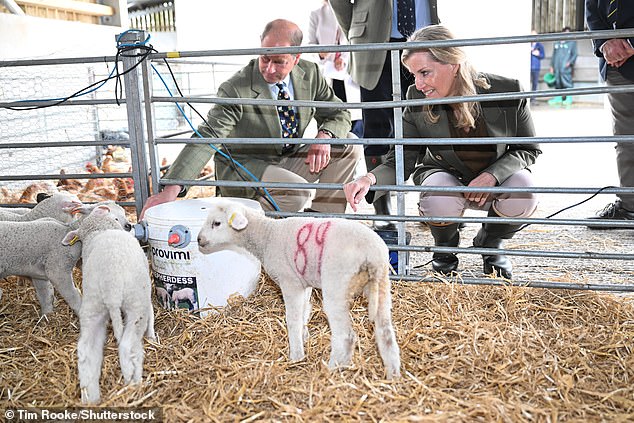 The couple, pictured, grin as they get to meet some of the lambs at the Newton Abbot farm