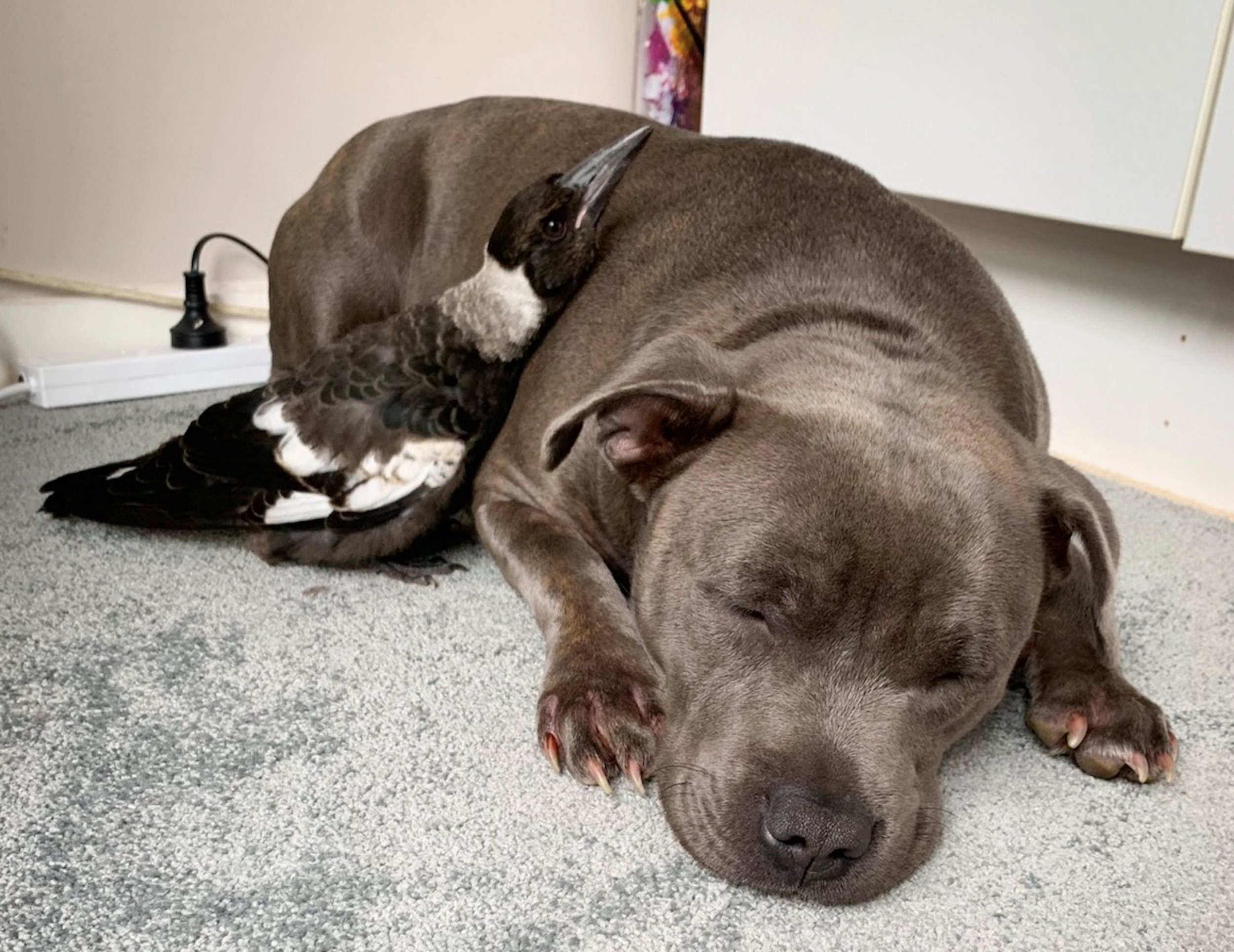 An adorable English Staffy has formed a beautiful friendship with a wild magpie – even producing breast milk for the bird.

Sweet English Staffy Peggy found a small magpie that had been left for dead while out on their usual daily walk back in September last year, and she alerted her owner Juliette.

Juliette from Queensland, Australia, says that while her adorable one-year-old pup is usually terrified of magpies, Peggy seemed very concerned about the small injured bird.

Juliette and her partner Reece got some advice from a local wildlife specialist about how to nurse the magpie back to health – and within a week, she had made a full recovery. But during that time, Peggy and the bird had become inseparable.

After spending every day with Peggy by her side, the magpie – which Reece named Molly – did not want to leave, despite being the couple trying to persuade her to fly off.

Molly and Peggy didn’t want to be separated, and they even sleep side by side, a video of the pair appearing to ‘hold hands’ while they’re sleeping has racked up 2.4 million views on a TikTok.

‘Never in my wildest dreams would I have imagined a video I recorded of these two doing what they do best every day, being cute playing and snuggling together, would reach over 2 million people,’ says Juliette.

Molly the magpie became obsessed with Peggy and the pair became inseparable – with loving Peggy even producing breastmilk for the bird.

‘Molly slept for the first 24 hours, we didn’t think she was going to make it,’ says Juliette.

‘We got her some live worms and a dropper with water, and within a week she had picked up.

‘We always leave all the doors and windows open and have tried to get her to fly back into nature but she has no interest in leaving us.

‘We’ve been teaching her to catch her own worms and lizards. But she really thinks she is a dog, she runs around after Peggy.

Juliette says Molly thinks Peggy is her mum, and Peggy thinks she is her daughter.

‘They have their own little language and talk to each other. It’s so funny to watch,’ she says.

Juliette was shocked to discover that Peggy had started producing milk, despite not being pregnant. The vet said it was because Peggy thinks Molly is her baby, and was producing milk in the same way as if she had puppies.

‘Molly kept poking at her nipples too, so for now Peggy is wearing shirts until it passes so her nipples are covered,’ says Juliette.

‘It’s crazy to think that this could happen, but it just shows their amazing bond.’

Juliette adds that Molly does not seem to have any intention to leave anytime soon. The little bird even sleeps at the top of her curtain rod in the bedroom, while Peggy sleeps in her bed.

‘They are together from the moment they wake up until when they go to sleep,’ she adds. ‘Then they’ll cuddle and play all day. It’s so lovely to see them together.

‘They definitely have a mother-daughter type of bond. Peggy needed something to nurture, and this little bird needed nurturing.

‘We are happy for Molly to stay with us as long as she wants to, but she knows she is free to fly away anytime.

‘We’re blown away by their relationship, they have bought so much joy into our lives.’

Do you have a cute animal story to share? We want to hear from you.