Starbucks brewed up a slate of summer drinks as it races to lure in customers after months of stifled business created by the pandemic.

The Seattle-based coffee giant moved to expand its menu, offering up eight new drinks to customers nationwide. The coffeehouse chain has reopened 95 percent of company-operated stores under guidelines designed to curb the spread of COVID-19.

The revamped menu, which includes its nitro cold brew and iced passion tango tea, is available at Starbucks stores across the United States and for order with the company's app.

The company is trying to drum up sales after the virus forced the company to close its stores to customers but continued to operate pick-up and other services in most locations.

Last month, the brewer projected that it would take a revenue hit between $3 billion and $3.2 billion for the three months ending in June because of the virus, according to a regulatory filing. During the same span of time, it also estimated that the pandemic would slash its operating income between $2 billion and $2.2 billion as the virus raged, the filing stated. 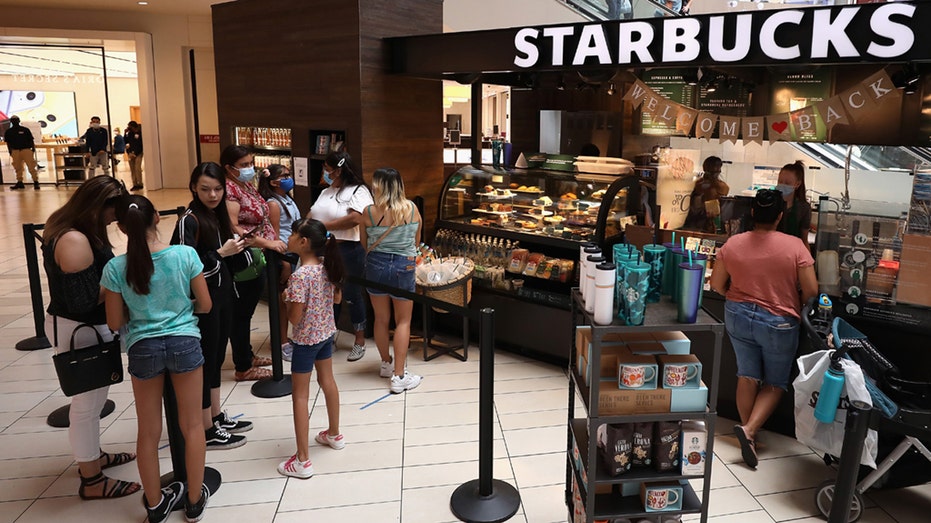 Consumers wait in line at a Starbucks location at the Arrowhead Towne Center on June 20, 2020 in Glendale, Arizona. (Photo by Christian Petersen/Getty Images)

However, around the same time, Starbucks told investors that it believed its most difficult period was behind them.

"With each passing week, we are seeing clear evidence of business recovery," the company said while adding that they are seeing "sequential improvements" with store sales that have been open for at least a year.

To date, the Seattle company said 95 percent of U.S. company-run stores are in operation at varying levels of service, just slightly lower than operations globally.

In order to take advantage of the new offerings, customers will be able to find a store, check store hours, order ahead and use contactless payment with the company's app.

The new line up of drinks now includes: