Streeton’s Venetian masterpiece, hidden for a century, set for auction

Arthur Streeton’s finest European painting, his magnificent depiction of Venice’s Grand Canal, is going to auction for the first time in more than a century. With an estimated price range from $1.5 to $2 million, it may surpass the record set by Streeton’s Settler’s Camp, 1888, which sold for an impressive $2,520,000 in 2012. 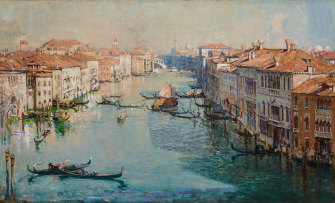 “It is possible, particularly in this buoyant market,” says Chris Deutscher, co-executive director of Deutscher and Hackett, which is handling the sale.

The renowned Heidelberg School artist painted The Grand Canal in 1908, while in Venice for a second honeymoon with his bride, musician and fellow painter Nora Clench.

Purchased by Arthur Baillieu in 1914, just before the outbreak of World War I, it measures 92cm by 168.5cm and has remained in the Baillieu family since. In 2019, the expansive piece was spied by Sarah Schmidt, then head of the Hamilton Gallery, in a private home in Victoria’s western district.

Now director of the Canberra Museum and Gallery, Schmidt has since conducted extensive research into the work’s provenance. Thanks to Schmidt’s discovery, The Grand Canal was featured in the Art Gallery of New South Wales’ Streeton show in 2020, where a smaller version of the painting is also housed. Before that, it was last shown publicly there in 1931-32, in a show called Loan Exhibition of the Works of Arthur Streeton.

According to Schmidt, the painting is significant as an example of Streeton’s craftsmanship and vision. A powerful contrast between sunshine and shade, the image was painted from a nearby palazzo, just as he saw it. 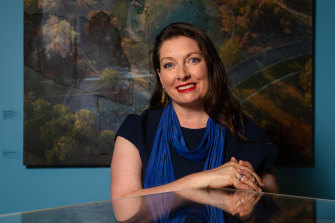 The piece reflects an optimism, perhaps pointing to the artist’s happiness as a newlywed and being flush with success after two major exhibitions in Melbourne and Sydney. It also documents another time, recording a part of the world under threat thanks to climate change.

“Its tones are very peaceful, its use of complementary colours – blues and oranges – makes it a very harmonious picture,” Schmidt says. “Standing in front of it as a viewer you have this great command of the view, a lot of it is terracotta rooftops, in ochre, tan colours and they are complementary to a blue sky, the water. There are so many interesting markers that he has placed: gondolas, barges, struts in the water and palace buildings.”

The auction of The Grand Canal will take place on April 21, conducted by Deutscher and Hackett. Schmidt is hopeful the extraordinary work will become part of the collection at AGNSW, where it was originally shown back in the 1930s.