Los Angeles educator Trimaine Davis, one of those selected by the NFL, reacts to the announcement and discusses how he has supported his students during the pandemic.

Super Bowl LV is less than a week away and come Sunday night, Tom Brady and the Tampa Bay Buccaneers will become the first team in NFL history to have the big game played at their home stadium.

The Chiefs finished the 2020 NFL season with a 14-2 record and as the No. 1 seed in the AFC. Mahomes threw for 4,740 yards with 38 touchdowns and only six interceptions. Tight end Travis Kelce led the team in receptions (105) and receiving yards (1,416), to go along with 11 touchdowns. Wide receiver Tyreek Hill had 87 receptions for 1,276 yards and a team-high 15 touchdowns.

The Buccaneers, on the other hand, finished second in the NFC South with an 11-5 record and they were the No. 5 seed in the NFC. They defeated the Washington Football Team, 31-23, in the wild-card round of the playoffs, and after they lost both games to division rival New Orleans in the regular season, the Bucs pulled out a 30-20 victory over the Saints in the divisional round. Tampa Bay finished its road winning streak at Lambeau Field against Green Bay in the NFC Championship by taking down Aaron Rodgers and the Packers, 31-26.

Brady led the Bucs with 4,633 passing yards, 40 touchdowns, and 12 interceptions. Mike Evans was the only receiving option to surpass the 1,000-yard mark (1,006), and he also hauled in a team-high 70 receptions with 13 touchdowns. Fellow wideout Chris Godwin finished the regular season with 65 catches for 840 yards and seven scores, and tight end Rob Gronkowski had 45 receptions for 623 yards and seven TDs.

Both teams have a ton of playmakers on both sides of the ball, which means it should be a game for the ages. Here are five X-factors on the Buccaneers who could make a difference between winning and losing come Super Bowl Sunday. 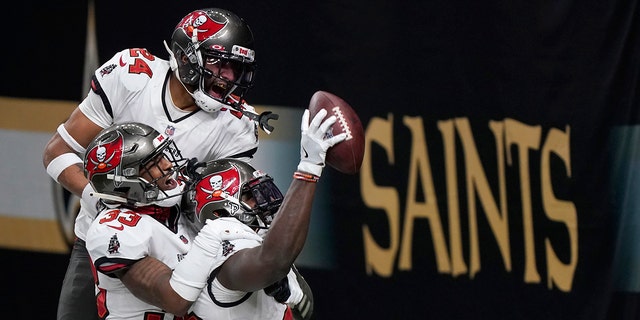 Tampa Bay Buccaneers inside linebacker Devin White, bottom right, celebrates after intercepting a pass with teammates Jordan Whitehead (33) and Carlton Davis (24) against the New Orleans Saints during the second half of an NFL divisional round playoff football game, Sunday, Jan. 17, 2021, in New Orleans. (AP Photo/Brynn Anderson)

When the Buccaneers and Chiefs squared off back in Week 12, Chiefs wideout Tyreek Hill had a game to remember, when he hauled in 13 catches for 269 receiving yards and three touchdowns in a 27-24 Kansas City victory. Bucs cornerback Carlton Davis had the assignment to cover Hill for most of that game, but he obviously couldn’t contain him.

It will be interesting to see what Bucs defensive coordinator Todd Bowles dials up to slow down the speedy wide receiver in Super Bowl LV. You can imagine that Davis, a 2018 second-round pick out of Auburn, will look to redeem himself in this game, but he will definitely have his work cut out for him. If for some reason Hill is once again let loose during their rematch, it could be a long night for the Bucs defense. 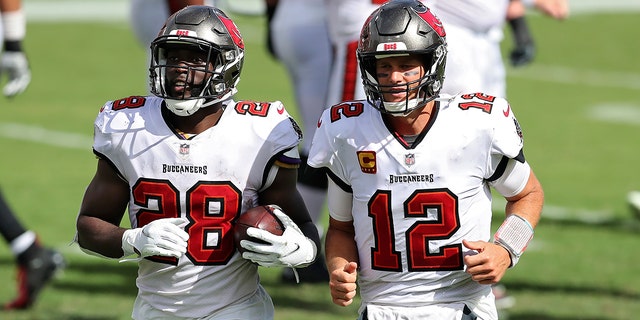 Tampa Bay Buccaneers running back Leonard Fournette (28) runs off the field with quarterback Tom Brady (12) after Fournette ran 46-yards for a score against the Carolina Panthers during the second half of an NFL football game Sunday, Sept. 20, 2020, in Tampa, Fla. (AP Photo/Mark LoMoglio)

Starting running back Ronald Jones has been dealing with nagging injuries during their playoff run so far, but backup Leonard Fournette has done a great job filling in. In the Bucs’ three playoff games, Fournette has 48 carries for 211 yards (4.4 AVG), with two rushing touchdowns. He also had 14 receptions for 102 yards and one more score.

If the Bucs plan on keeping up with the Chiefs’ high-powered offense, they will need to run the football successfully in order to keep Mahomes and company off the field. Fournette, who was scooped up by Tampa Bay back in August after the Jacksonville Jaguars released him, is a downhill runner capable of picking up first downs and he could even pull off a huge run if he needs to.

Look for the Bucs to feed Fournette early and often in Super Bowl LV.

LEBRON JAMES REACTS TO TOM BRADY’S 10TH SUPER BOWL APPEARANCE: ‘AT OUR AGE, WE CAN STILL DOMINATE OUR SPORT’ 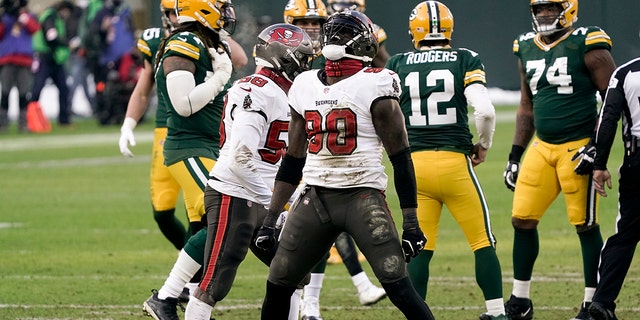 Consistently pressuring the opposing quarterback is the best form of defense there is, and there is nobody on the Bucs’ defense with more big-game experience than Jason Pierre-Paul.

As a member of the New York Giants in Super Bowl XLVI, Pierre-Paul had two tackles, two passes defended, and one QB hit on former Patriots quarterback Tom Brady in New York’s 21-17 upset-victory.

In Tampa Bay’s 31-26 win over the Packers in the NFC Championship, Pierre-Paul and fellow defensive end Shaq Barrett consistently pressured Green Bay quarterback Aaron Rodgers all game long and even teamed up to sack him five times in the game. Rodgers, the likely 2020 NFL MVP, wasn’t at his best, and a huge reason for that is the constant pressure he faced from Pierre-Paul, Barrett, Ndamukong Suh, and the rest of the Bucs defensive line.

If the boys up front get to Mahomes, the Bucs chances of winning increase tremendously. 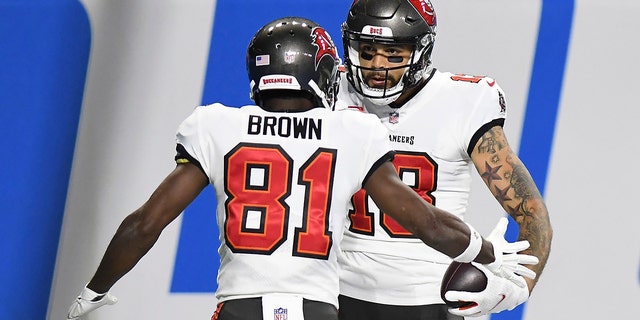 Tampa Bay Buccaneers wide receiver Mike Evans (13) celebrates his 27-yard reception for a touchdown with teammate wide receiver Antonio Brown (81) during the first half of an NFL football game against the Detroit Lions, Saturday, Dec. 26, 2020, in Detroit. (AP Photo/Lon Horwedel)

All eyes will be on wide receivers Mike Evans and Chris Godwin. Even tight end Rob Gronkowski will demand some kind of attention, but former All-Pro wideout Antonio Brown is undoubtedly the biggest factor for the Buccaneers on the offensive side of the ball.

Brown was injured in Tampa Bay’s 30-20 win over the New Orleans Saints in the divisional round of the NFC playoffs, and he was inactive against the Packers a week later, but you can bet that he will suit up in Super Bowl LV, and if healthy he provides an instant boost to Tampa Bay’s passing game.

In 2020, Brown only played in eight games after serving an eight-game suspension, but he finished with 45 receptions for 483 yards and four touchdowns. It will be interesting to see how head coach Bruce Arians uses him because a wideout with sure hands like Brown must be on the field at all times.

SUPER BOWL LV TIME, DATE AND EVERYTHING YOU NEED TO KNOW ABOUT THE GAME 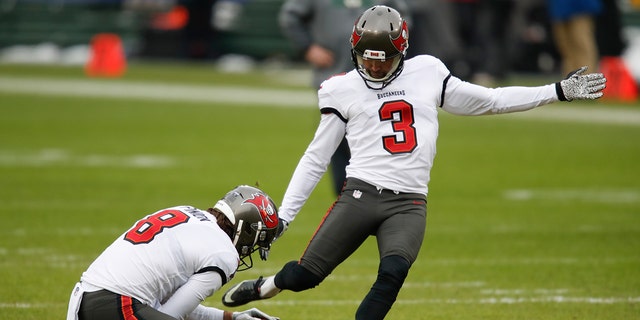 Tom Brady had the luxury of playing with two of the greatest kickers in NFL history while quarterbacking the New England Patriots to six Super Bowl titles. Both Adam Vinatieri and Stephen Gostkowski made clutch kick after clutch kick during their time with the Patriots, and if not for either kicker, it’s likely that Brady has less than six rings.

Imagine this scenario in Super Bowl LV: The Chiefs hold a 30-28 lead over Tampa Bay, Brady drives the Bucs down to the Chiefs’ 40-yard line with five seconds left in the game, setting up a potential game-winning field goal for Bucs kicker Ryan Succop.

The question that looms: Will he make the kick? Vinatieri and Gostkowski did. But will Succop?