The 10 biggest royal scandals from this year so far 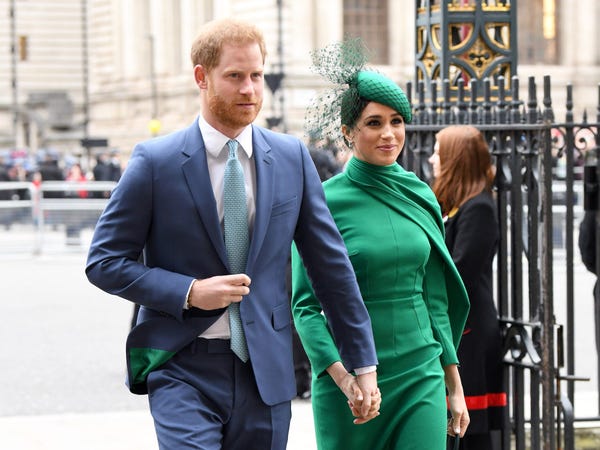 1. The Duke and Duchess of Sussex announced their "step back" from the royal family on January 8 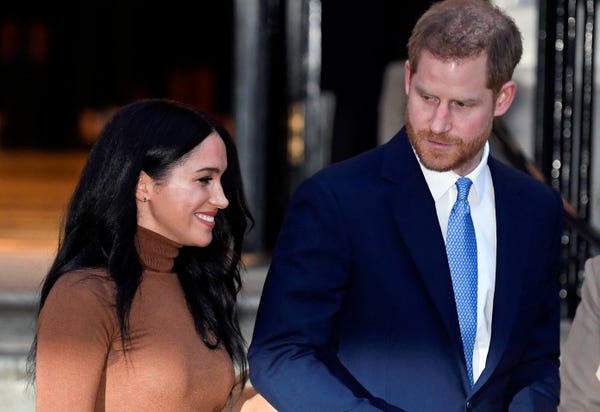 The Duke and Duchess of Sussex announced in January their plans to step back from royal duties after months of speculation.

The couple shared their plans in an Instagram post, saying that they planned to divide their time between the UK and North America. They also shared their intention to become financially independent "while continuing to fully support Her Majesty The Queen."

After what appeared to be some miscommunication with the palace, Prince Harry said during a speech days later that he was told they wouldn't be able to do this without using public funding.

There was speculation about the couple's unhappiness with royal life ever since Meghan Markle's emotional ITV interview in 2019, where she said: "Not many people have asked if I'm OK."

2. The Queen's grandson Peter Phillips' secret split from his wife Autumn was revealed in February 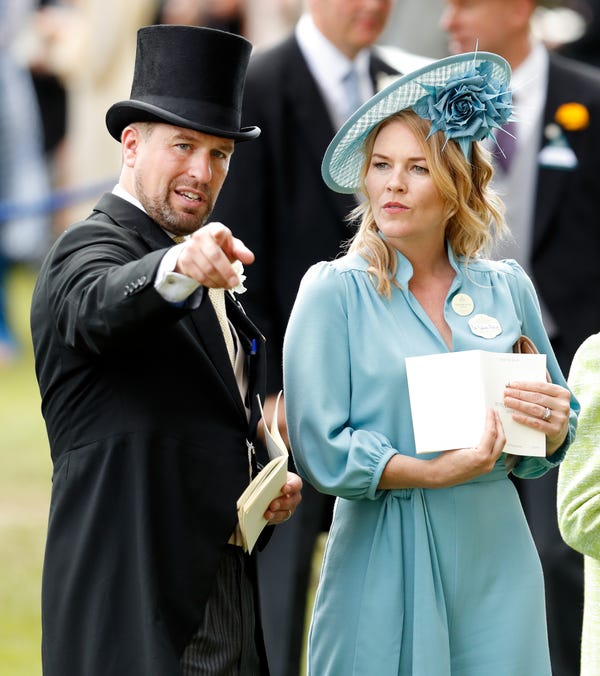 Peter Phillips and Autumn Kelly split in 2019, however, they only announced their plans to divorce earlier this year after the British press discovered the news.

A spokesperson for the couple denied rumors that Kelly could return to her native country, Canada, with the statement: "Both Peter and Autumn will remain in Gloucestershire to bring up their two children where they have been settled for a number of years." 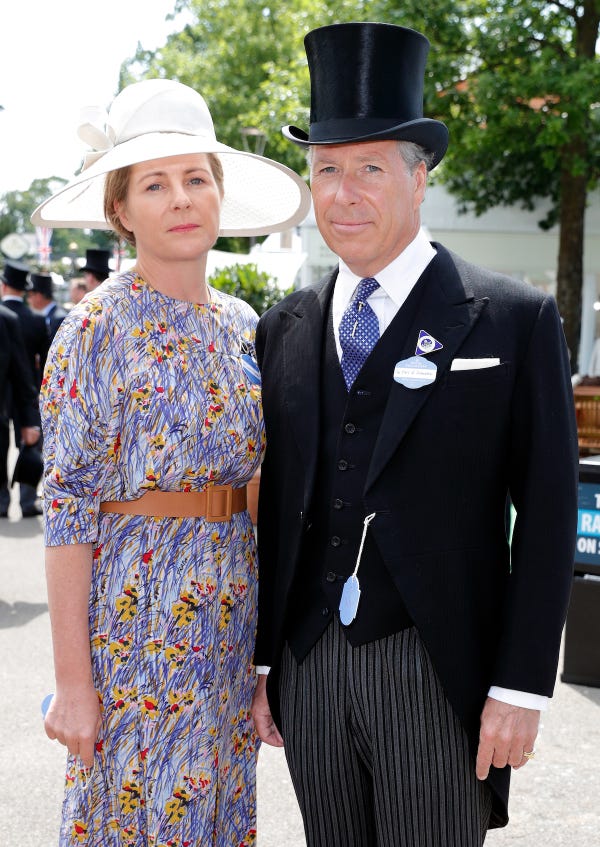 On February 17, David Armstrong-Jones and his wife Serena announced they had amicably agreed to divorce. The couple have two children together.

Armstrong-Jones is the son of the Queen's sister, the late Princess Margaret. At the couple's wedding in 1993, Serena paid tribute to her mother-in-law by wearing the same tiara she wore on her wedding day.

The couple announced their divorce just a week after Peter and Autumn Phillips.

4. Tensions between "the Fab Four" appeared high during Harry and Markle's final engagement as working royals 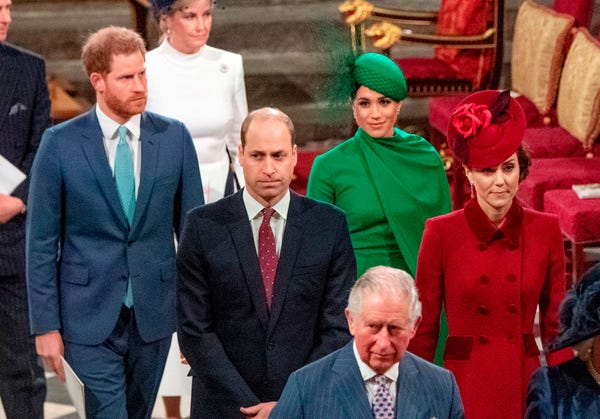 At the Commonwealth service in March, Harry and Markle came face to face with Kate Middleton and Prince William for a second time since Harry admitted there was a rift between himself and his brother back in November 2019.

It was Harry and Markle's final engagement as working royals. The couple arrived at Westminster Abbey just a few moments before William and Middleton, and the group did not greet each other or acknowledge each other during the ceremony.

5. People called for the Queen to revoke the couple's titles after they signed a deal with Netflix 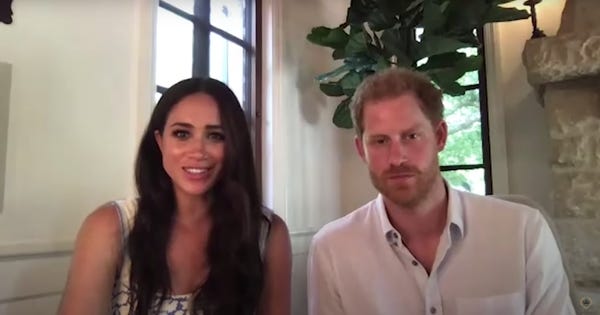 Harry and Meghan Markle signed on to produce documentaries, scripted television, and family programming for Netflix in September.

"We're incredibly proud they have chosen Netflix as their creative home and are excited about telling stories with them that can help build resilience and increase understanding for audiences everywhere," Netflix's co-chief executive Ted Sarandos said in a statement.

The couple's entry into Hollywood left royal watchers urging the Queen to revoke their titles.

"But if they really want to be independent, it seems they do, they want to live in Hollywood or Santa Barbara and wanna make woke movies or TV shows and make us feel lovely and fluffy about everything, that's fine," Piers Morgan said while hosting "Good Morning Britain," according to The Mirror.

"I just don't think, as a Sussex resident all my life, I don't think they should be allowed to keep the titles Duke and Duchess of Sussex," he added.

British newspaper The Daily Express polled readers on whether the couple should drop their titles, with 98% of respondents saying they should, according to the publication.

However, royal experts told Insider this likely wouldn't happen as Harry's title is his "birthright."

"The Queen made the decision to honor Harry by making him a royal duke on his wedding day. He is, and will always be, a prince — given he is the second son of the heir to the throne," royal editor Robert Jobson told Insider.

6. The Queen faced accusations that the royal honors medal is racist 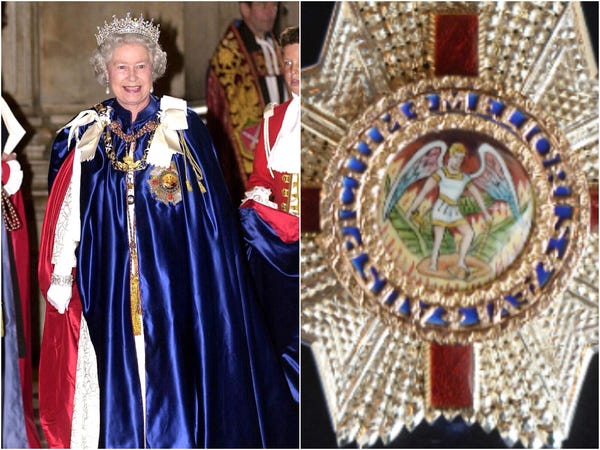 More than 19,000 people have signed a change.org petition to urge the Queen to have the royal honors medal redesigned, saying that the imagery resembles a white person standing on a Black person's neck and is therefore reminiscent of the death of George Floyd.

Jamaica's governor-general Patrick Allen boycotted his own medal, which was presented to him by Her Majesty. A spokesperson for Allen said he had requested a revision of the image used, but there has been no public response from the Queen.

It isn't the first time the royals have ignored accusations of racism. Her Majesty has also failed to apologize for the monarchy's historical role in supporting the Black slave trade, or for other instances of racism at the hands of the royal family over the years.

7. Princess Beatrice got married in secret 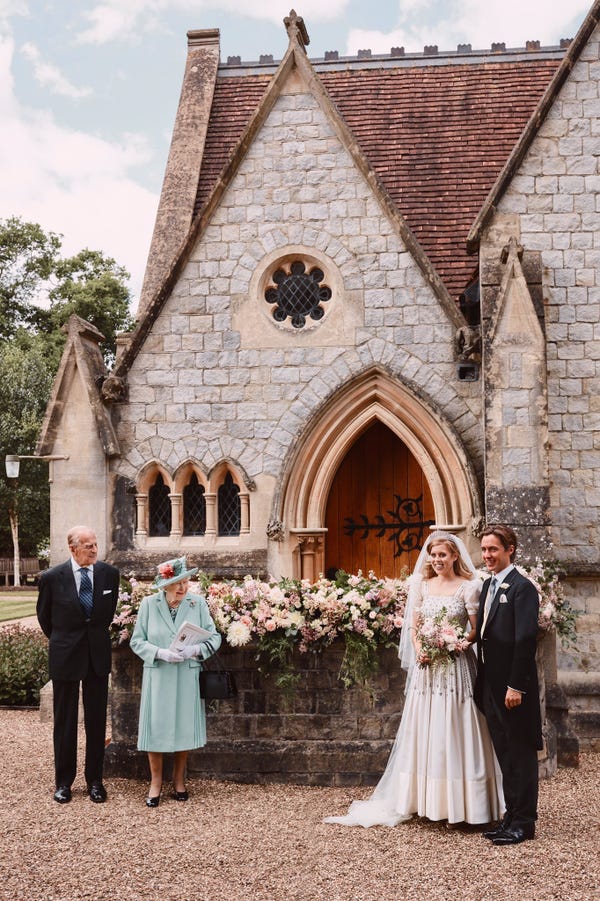 Princess Beatrice of York and Edoardo Mapelli Mozzi got married in Windsor on July 17 after canceling their original plans for a May wedding due to the coronavirus pandemic.

The service was initially planned to be much larger, with the couple planning to tie the knot at the Chapel Royal in the grounds of St James's Palace, London, which has the capacity for 150 guests. They also planned to have their reception in the gardens of Buckingham Palace.

Beatrice wore the same tiara worn by the Queen on her wedding day for the rescheduled socially distanced service at The Royal Chapel of All Saints in Windsor.

Only 20 people, including Her Majesty and Prince Philip, were able to attend the service due to the social distancing restrictions.

The world's press was not informed about the rescheduled wedding ceremony until after it had already taken place.

8. The Sussexes broke their silence on politics

The Sussexes again faced calls for their titles to be revoked after they encouraged people to vote.

During a virtual appearance at the When Women Vote conference in August, Markle said those who didn't vote would be "complicit." While she didn't mention her personal political views, she said "we all know what's at stake" in this year's US general election.

The couple also encouraged Americans to vote during a joint appearance on the Time100 televised special in September.

Royal commentators said that it was against protocol for the couple to discuss politics. However, the Queen has also encouraged voting in the past.

The Queen spoke of the importance of voting in 2003 after a low voter turnout in Wales.

"It is vital to the health both of the United Kingdom and of Wales that our democratic institutions flourish and adapt," the monarch said during a visit to the Welsh Assembly, according to The Times. 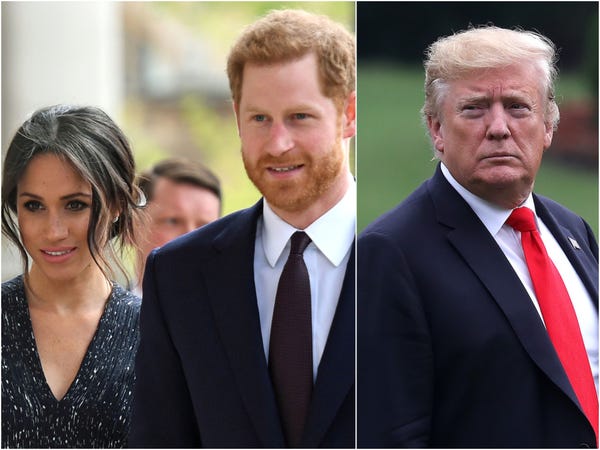 Markle called Trump "divisive" and "misogynistic" during a TV interview in 2016.

While Markle hasn't spoken about Trump since she became royal, the US President famously said he "didn't know she was nasty" when a reporter told him about the duchess' comments last year.

The rift between the pair and Trump escalated in March this year when Harry was recorded saying the president has "blood on his hands."

"Certain presidents around the world are driving completely the wrong agenda," Harry said when speaking to two YouTube pranksters who had impersonated Greta Thunberg and her father during a phone call.

"I don't mind saying this to you guys, the mere fact that Donald Trump is pushing the coal industry is so big in America, he has blood on his hands."

While Trump didn't respond to the comments, he did address the couple after a reporter asked what he thought of them "essentially encouraging people to vote for Joe Biden" in September.

"I'm not a fan of hers," Trump said. "And I would say this — and she probably has heard that — but I wish a lot of luck to Harry, because he's going to need it." 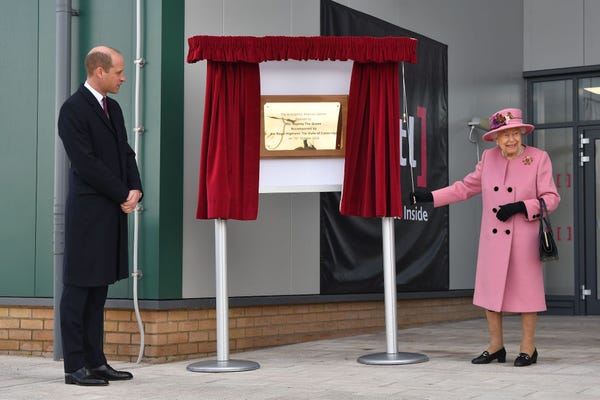 Queen Elizabeth II stepped out for her first engagement since the pandemic without a mask earlier in October. Prince William also did not wear a mask, despite having worn one at previous engagements.

While the 48 staff members who the pair came into contact with during the engagement had reportedly "very recently" tested negative for COVID-19, the monarch still should have considered wearing one, according to infectious disease specialist Dr. Sandra Kesh.

While Dr. Kesh previously told Insider that the risk had been "minimal" in this instance, she believes public leaders should still wear one since it "reaffirms that this is a shared responsibility regardless of your position or station in life."

Dr. Kesh added that the royal household should have considered that "testing is not 100% [accurate]."

"We know that individuals may be infected and test negative," she said. "I think the message that those surrounding the royal family were tested negative should not give people false reassurance that this was an entirely safe situation."