Home » Lifestyle » The best ever action scenes, according to Aussie director Patrick Hughes

The best ever action scenes, according to Aussie director Patrick Hughes

Melbourne filmmaker Patrick Hughes blames his love of action movies on his dad, who used to sit him down every Sunday growing up and show him Westerns featuring morally steadfast gunslingers taking the law into their own hands.

That and the lax clerk at his childhood Blockbuster Video shop.

“I would’ve been, like, 8 years old,” he recalls. “But there was a certain staff member who’d never ask me for ID, so I’d rent things like Predator, Alien, Robocop. I got busted by my mum once and I had to go back and return them all, the walk of shame.” 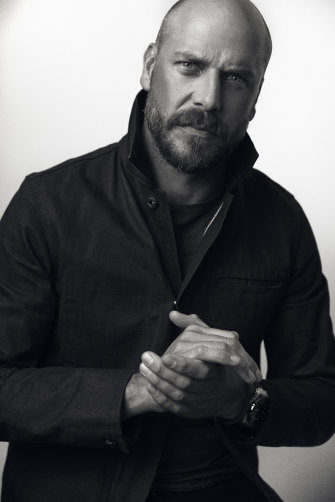 The movie that made Hollywood sit up and take notice of Hughes’ work? 2014 hit Expendables 3. Credit:Austin Hargrave

If Mum only knew. Hughes’ action obsession has since seen him direct the cult neo-Western Red Hill, which premiered at Berlin Film Festival in 2010, and 2014’s The Expendables 3, where he directed action icons including Sylvester Stallone, Arnold Schwarzenegger, Dolph Lundgren and Jet Li. 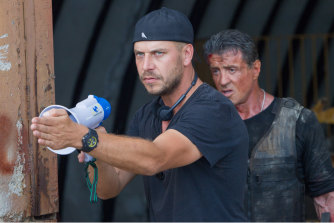 Hughes, left, with Sylvester Stallone on the set of Expendables 3, says he holds his own when directing famous actors. “I’m very vocal on set and I bring a lot of energy.”

“It’s crazy for all of three seconds, then as director you’re responsible for the budget and the schedule and that’s more important than anything,” he says of the experience.

“It was a trial by fire, but I held my own. I’m very vocal on set and I bring a lot of energy, and I think they all really appreciated that. I feel like I got the stamp of approval from Hollywood after that, like, ‘Patrick can work with anyone.’”

His new film, The Hitman’s Wife’s Bodyguard, starring Ryan Reynolds, Samuel L. Jackson and Salma Hayek – the sequel to his surprise box-office smash, 2017’s The Hitman’s Bodyguard – is so over-the-top in its action excess, a bickering buddy road film in which Reynolds’ character is killed off about five times, that it could be a Looney Tunes short.

“This franchise is literally a cartoon with real-world actors. The only way it works is if Ryan suffers for eternity; that’s why he ends the movie with a face like a mashed potato,” Hughes says with a laugh. 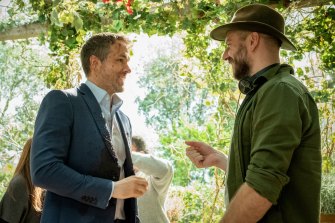 Ryan Reynolds and Hughes on the set of Hitman’s Wife’s Bodyguard. Credit:Village Roadshow.

“Action filmmaking is absolutely exhausting. Sometimes you’ll spend two weeks on a sequence and it’s like, ‘OK, let’s go back to the studio and shoot some performance stuff now.’ It’s a holiday to go and shoot, like, a therapy scene with Ryan. That’s easy compared to the rest.”

“This is just a masterclass in tension. I remember the first time I saw the film, a 70mm print at the Astor in Melbourne, it absolutely blew my mind. If you look at that scene, there’s not much happening; it’s more the expectation of what might happen. It shows how you can create incredible tension with just very minimal elements.”

“So many times when I’m working I just think, ‘What would George Miller do?’ This scene’s crafted like a beautiful dance. The way it’s choreographed, where it’s like, ‘Who’s got the gun?’ and there’s people handcuffed together, it has this compounding dramatic effect.”

“He’s the grandmaster of action sequences, that’s for sure. Also, the efficiency, the way he shoots, I’m sort of in awe of him. This sequence in particular is all about the obstacle. It’s another layer in designing an action sequence, where you go, ‘OK, we have an incredible car chase – but what’s in the way?’

“I mean, it’s pretty freaking crazy that he pulled it off. It’s like, ‘I’m going to have a truck that’s fully loaded with cars, and those cars are going to fall off the back of it so now we’re dodging these flying elements’, and then he throws a boat in for good measure.

“I was actually with Bay in Miami while I was doing my new film The Man From Toronto and he gave me a lift home one night. We were driving across a bridge in Miami and it only dawned on me halfway through the trip, I went, ‘Wait, is this the bridge from Bad Boys II?’ And he was like, ‘Yeah.’ And then he proceeded to show me where he placed all the cameras!

“We met probably a year and a half ago, just through the business. I’ve learned a lot from him. Sometimes I might have a strange production question and there’s not a lot of people you can call up and ask, ‘Hey man, you know when you try and light up a 400-foot wall of fire…’ I mean, how many people can you call that have done that? He has and he’s very giving with his advice.”

“Back when digital lens photography took off, instead of doing storyboards I’d have people standing in as the actors – like, ‘OK, you’re Ryan, you’re Sam, you’re Salma, stand here, do this, do that, look there’ – and then bang, bang, bang, you take the shots and you can lay them all up on your computer and say, ‘Look, this is how I want to shoot it, this is the sort of lens length I’m thinking’, and so on.

“That was something I learnt from Mann, something he did on this sequence – and that was even before digital photography. This is the cool thing about filmmaking, it’s a craft and you can learn from things people did before you.

“There’s something really harrowing about this sequence, because the film has built to such a crescendo at that point that it’s like a fuse waiting to be lit; as soon as they make eye contact, it’s on. And then it’s unrelenting! It’s the kind of action sequence that just keeps going and going.

“Also, the sound design is amazing. Anytime I tweak the home cinema system and get the atmos speakers going, the first thing I play is this scene, every time. You could even ask my kids. They’ll be like, ‘Oh, do we have to watch this scene again?’ And I’m like, ‘Yes! I’m testing the sound system!’”

“I reckon it’s one of the greatest chase sequences ever shot. If you look at the dynamics of that – the interplay between the actors and the cameras – it’s this beautiful dance that happens.

“When I watch this with my director’s hat on, I’m thinking about all the magic behind the curtain. It’s like, ‘Oh my god, that set-up alone would’ve been like three-and-a-half hours just to get that shot.’ And just the dynamics of people getting off and on moving trains in the same steadicam shot? It’s just stunning.”

“I watch this scene and all I can say is it’s a masterpiece. There are so many eyelines, and that’s the scariest thing about directing; as soon as there are multiple eyelines, you lose sleep over that stuff. Because you have to acknowledge it – like, if I’m looking at someone over there, now I have to go over there and shoot back this way to cover off their point of view.

“If you look at how many different eyelines are going on in that sequence that Spielberg put together, I think I lost count at something like 70. Just the mechanics and logistics of that… It might not sound very hard, but it freaking is! He’s a master.”

“I saw this as a kid when it came out in the cinemas; I always used to sneak in and watch movies that I shouldn’t watch. I’d buy a ticket for some Disney movie like Aladdin, and I’d go see Basic Instinct. That’s just how I rolled.

“This is just some gnarly use of handheld. I love the vibrancy, it’s very visceral, jumping those fences and then plowing through the neighbour’s house where someone’s feeding a baby ’cause that’s just what people do in the morning.

“Bigelow did a phenomenal job on this scene. That still holds up to this day, you watch that chase sequence and you’re like, ‘Daaamn.’”