As one of the most fashion-focused films of the 21st century, The Devil Wears Prada features clothes and accessories from the likes of Chanel, Zac Posen, and — of course — Prada, but the studio had trouble finding designers who would with them over fears of angering Vogue editor-in-chief Anna Wintour.

The 2006 film starring Meryl Streep as icy editor-in-chief Miranda Priestly was adapted from Lauren Weisberger’s 2003 novel of the same name. The bestseller was a scathing roman à clef of her experience as Wintour’s assistant, and fashion insiders were hesitant to get involved.

‘There were [initially] no designers of note who would appear in the film,’ director David Frankel told Entertainment Weekly during the cast’s reunion. They just didn’t want to incur the wrath of Anna.’

Looking back: David Frankel has opened up about directing The Devil Wears Prada, saying they had trouble finding fashion designers who wanted to be a part of the 2006 film 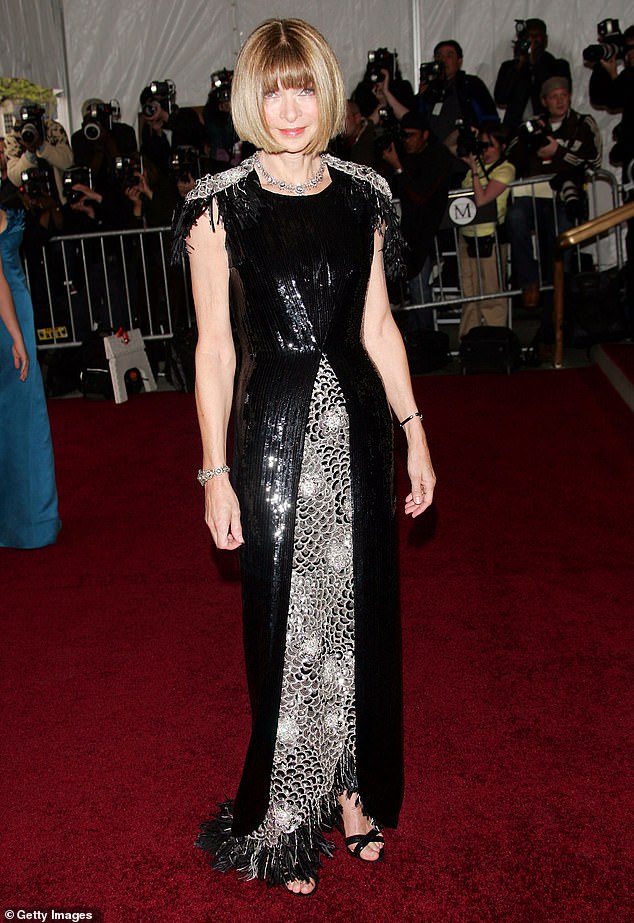 ‘Some of them showed us their showrooms or gave us notes on the authenticity of the script; they just didn’t want to participate.’

Costumer Patricia Field also had a difficult time finding designers to borrow clothes from, though she managed to procure roughly 150 designer pieces in just over four weeks.

‘Initially, Pat had a hard time getting clothes out of a lot of the designers,’ Frankel explained. ‘I think it was Prada that helped her break the ice and said that Anna’s not going to be upset.’

Streep, 71, praised Field for her work on the film, making it clear that building wardrobes for the characters — many of whom worked at the fictional fashion magazine — was a monumental undertaking.

‘Pat did a miracle with this. It’s like all the special effects in Tom Cruise’s Mission: Impossible movies, this is the female equivalent of that,’ the Oscar-winner told Entertainment Weekly.

‘It was her great relationships with all the wonderful houses, the designers, the people in the fashion business that she was able to, because she’s so loved. She borrowed everything. We had to be very careful not to eat spaghetti at lunch because it’d go down the front and they couldn’t return it!’

Anna Hathaway, who played Priestly’s assistant Andy Sachs, had an incredible fashion montage in the movie, but she admitted her Chanel look wasn’t that comfortable.

‘I [remember wearing] a Chanel sample, and it had pins in it,’ she recalled. ‘I was pulling pins out for weeks. I’d do a take, like, “Ow!” And we’d cut, I’d fish it out. Of course they were Chanel pins, so they were impossibly chic as well.’

Elizabeth Gabler, the former president of Fox 2000, told the publication that there were ‘people working within the Hollywood agency system that had loyalties to [Wintour] that felt we were doing something that was detrimental or insulting to her.’

‘I never had any direct conversations with people, it was always getting back to me. We just worked around it,’ she explained, crediting Streep with helping change people’s minds. 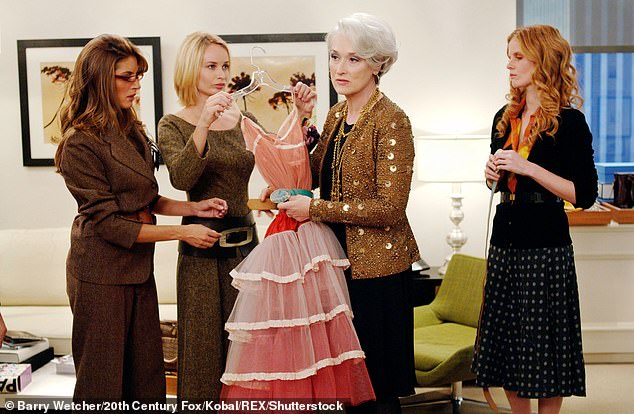 ‘Pat did a miracle with this. It’s like all the special effects in Tom Cruise’s Mission: Impossible movies, this is the female equivalent of that,’ Meryl Streep said of Field’s work on the film 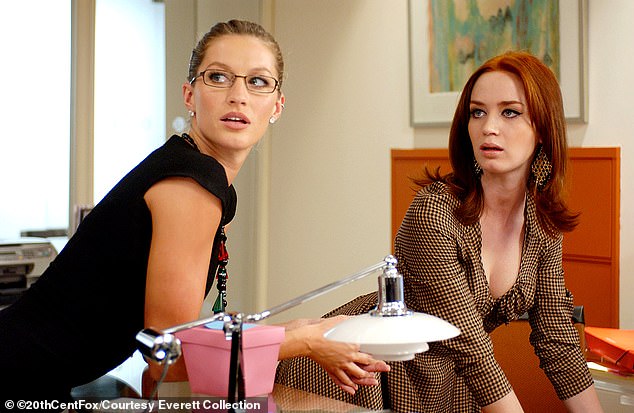 No worries: There was one fashion darling who was willing to be associated with the movie: supermodel Gisele Bündchen (L), who played Runway employee Serena 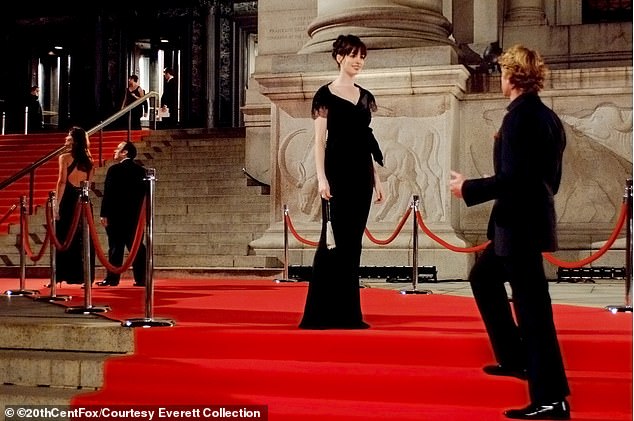 Hard times: They also struggled to get filming locations in New York because of Wintour’s wide reach, including the Metropolitan Museum of Art and Bryant Park 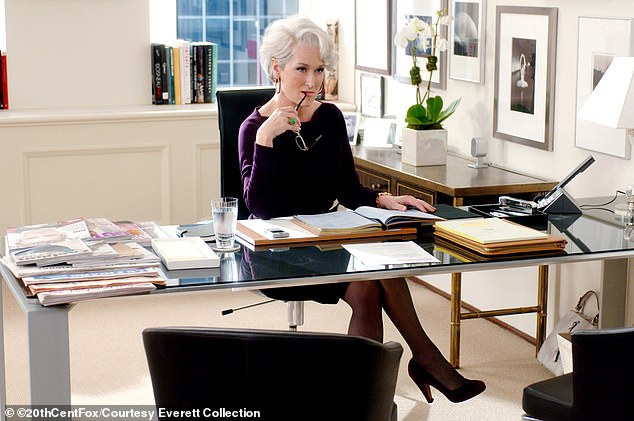 Look familiar? Frankel said the film’s production designer, Jess Gonchor, snuck into Vogue’s headquarters to get a look at Wintour’s office and then re-created it

‘The fact is that Meryl Streep wanted to do the movie,’ she said. ‘That put that discussion at rest, because she was so admired and respected that for people to say Meryl is doing this role, she was going to do her own version of this role, she wasn’t going to play a parody of anybody.’

Screenwriter Aline Brosh McKenna said she had similar difficulties when she was writing the film because no one wanted to step on Wintour’s toes.

‘I had enormous trouble finding anyone in the fashion world who’d talk to me, because people were afraid of Anna and Vogue, not wanting to be blackballed,’ she explained.

‘There was one person who spoke to me, whose name I will never divulge, who read it and said, “The people in this movie are too nice. No one in that world is too nice. They don’t have to be, and they don’t have time to be.” After that, I did a pass to make everyone a bit busier and meaner.’

However, there was one fashion darling who was willing to be associated with the movie: supermodel Gisele Bündchen, who played Runway employee Serena. 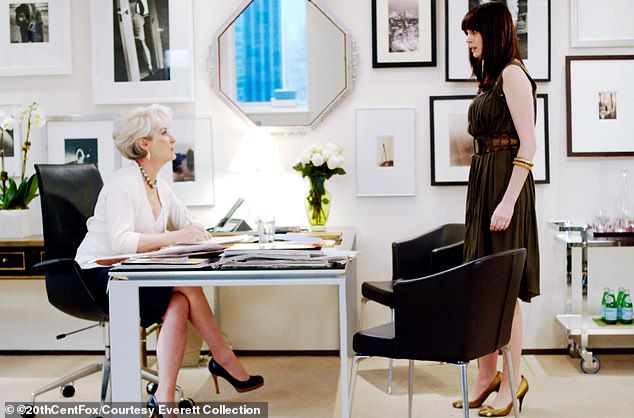 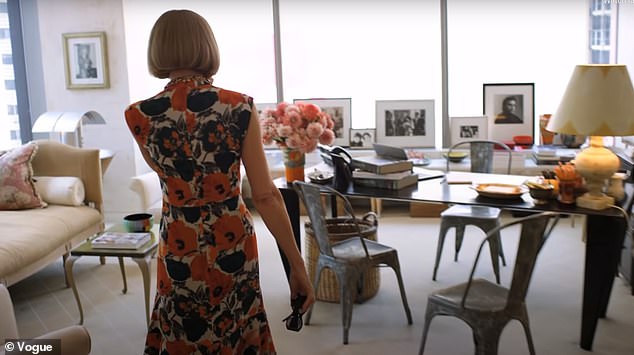 Fresh take : Wintour is pictured in her new office at One World Trade Center, where Condé Nast relocated to in 2014 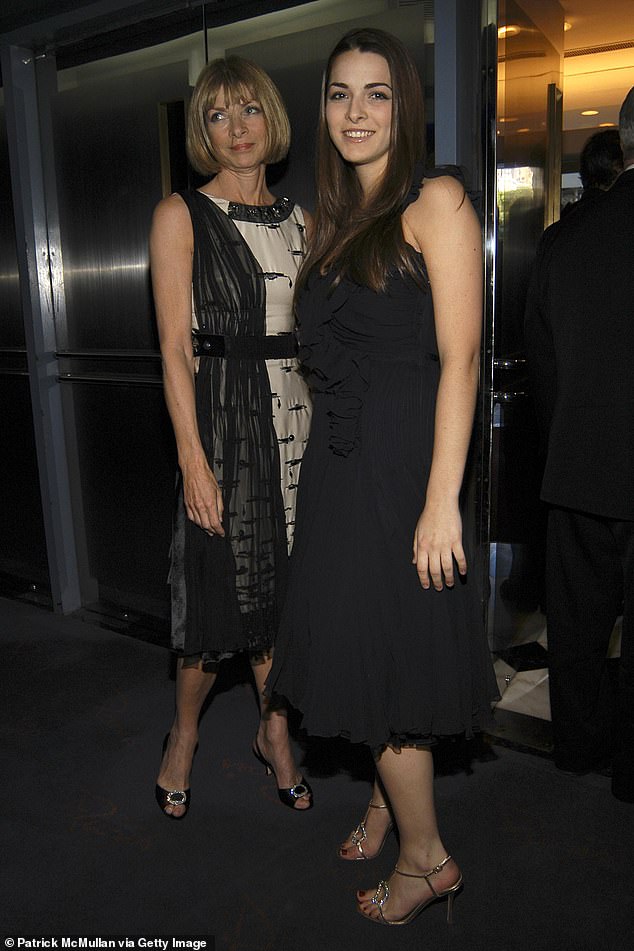 Hilarious: Many people were terrified of angering Wintour, but she was actually a good sport about the movie and even attended the screening with her daughter Bee — wearing Prada

‘You just knew the people that worked at Vogue were dedicated and professional,’ Bündchen said. ‘Anna was the final word, and everyone wanted to please her…but that’s true for everything. Who doesn’t want to please their boss?’

Frankel admitted that they even had issues finding filming locations because of Wintour’s reach in New York City.

‘The Met Ball meant that the Metropolitan Museum wanted nothing to do with us; because of Fashion Week, Bryant Park [didn’t either],’ he said. ‘Even these iconic apartment buildings we saw as possibilities for Miranda’s apartment, the co-op boards wouldn’t let us in. We went for weeks being unable to secure locations!’

The director added that the only contact they had with Vogue was through their production designer, Jess Gonchor, who snuck into the magazine’s headquarters to get a look at Wintour’s office. 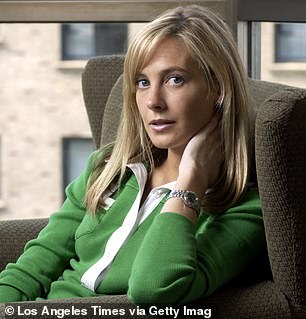 Fact: The Devil Wears Prada was adapted from Lauren Weisberger’s 2003 novel of the same name, a scathing roman à clef of her experience as Wintour’s assistant

‘He was able to re-create the office so authentically that I was told Anna redecorated hers immediately after the movie came out,’ Frankel said.

Weisberger noted that the film also nailed the overall vibe of the Vogue office, saying it was an accurate portrayal of the daily frenzy that would take place.

‘The scenes where the driver calls and she’s coming into the office and the entire office breaks into an absolute panic,’ she said. ‘That is the regular day-to-day craziness that I think was important to maintain…. There were a lot of things that skewed very close to reality.’

And while many people were terrified of angering Wintour, she was actually a good sport about the movie and even attended the screening — wearing Prada.

‘Anna came to the first screening in New York. She sat right in front of me and David with her daughter and wore Prada, which shows she has a great sense of humor!’ McKenna recalled.

Frankel remembered Wintour’s daughter, Bee Carrozzini née Shaffer, nudging the editrix throughout the screening, saying: ‘They got that right!’

He added: ‘A couple years later, I was at a tennis tournament in Miami…seated behind her, and when it was over, I made the effort to introduce myself. “I’m David Frankel, the director of The Devil Wears Prada,” and [she took her] hand out of [my handshake]!’