Two-and-a-half years after controversial high-profile brain surgeon Charlie Teo split with his wife of 30 years, he has been linked to a beautiful blonde international model and former patient. 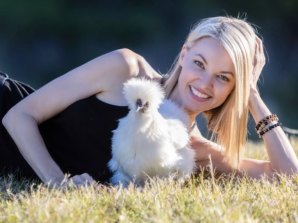 Traci Griffiths with one of her fluffy friends.Credit:Instagram

In February, Teo, 62, issued a media statement saying he had "separated over two years ago but remains great friends" with his ex-wife Genevieve, with whom he has four children. 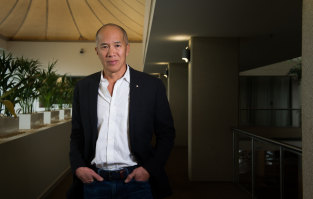 However, PS can reveal Dr Teo has grown close to Wollongong beauty Traci Griffiths, 46, a former model and pet apparel designer who he treated in 2011. 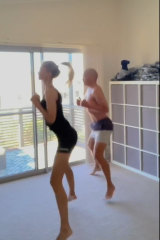 Since then she has become heavily involved in animal welfare, a passion which she has introduced to Teo, and which the surgeon appears to have embraced with gusto, throwing his support behind and joining Griffiths on the committee of the Zambi Wildlife Retreat.

The pair feature in social media photos playing with animals at the retreat.

Away from the fluffy animals, the pair share a passion for staying fit, with Griffiths posting a video on Facebook of a buff and shirtless Teo keeping up with the younger Griffiths in a sweaty workout they have clearly done before given their near-perfect synchronicity.

In September, Teo, who lists a Sydney two-bedroom unit as his residence since his wife received their Queens Park family home in their property settlement, purchased a half share in a house Griffiths had previously owned with her former partner.

Interestingly Griffith's former boyfriend's share in the property was sold to Teo's long-term secretary Laine Skene and her husband David for $776,250 on April 23, 2018. Just over two years later and the half share was then sold to Teo this year for the princely sum of … $1.

Griffiths has also been a vocal champion of Teo's, sharing a post on Facebook leaping to his defence after he was the subject of a lengthy investigation by the Herald's senior investigative journalist Kate McClymont.

"This inspiring man is a champion and as such is targeted from time to time by the 'tall poppy syndrome'. The cynics have their own agendas. They fail to take the time to stop to think about the angst their ill-considered and poorly researched words can cause. They do not consider those needing Dr Teo’s brilliant mind and skills to save or extend their lives," the post says.

"Yes, Charlie may not be your 'average' doctor, and even admits to being a rebel, but if you are always trying to fit in and be 'normal', you’ll never know how amazing you can be …"

LOVE ACROSS THE NULLARBOR 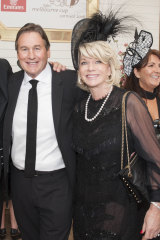 They had barely celebrated their second wedding anniversary when fate and a global pandemic forced former Channel Nine boss Jeffrey Browne from the arms of his heiress wife Rhonda Wyllie.

Browne told PS the pair had not seen each other in three months, largely thanks to travel restrictions and his need to be in his old home town of Melbourne to run his business interests while his sparkling bride (more diamonds than Botswana) stays put at her famed estate, the Rhondarosa, in Perth.

Browne assured PS there was no trouble in paradise, taking a pragmatic view of the situation as one that can not be helped.

"I think you will find quite a few couples have found themselves in the same situation as us. I can't afford to go back to Perth and face a two-week hotel quarantine when I've got businesses to run in Melbourne," Browne told PS.

"Rhonda has elderly people in her life to think of, so she has to stay put in Perth. Look, it's not great but it is what it is, and we are talking every day."

Among the other lovebirds who have found themselves on either side of the Nullarbor is Browne and Wyllie's great mates, Julie Bishop and her Sydney boyfriend David Panton, who have also been separated for seven months thanks to COVID-19. 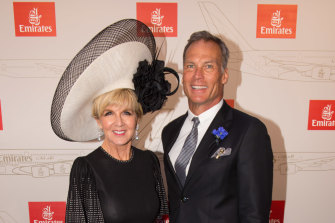 Lovebirds Julie Bishop and David Panton, separated by the Nullarbor and COVID-19.

However, PS hears Wyllie and Bishop have done what any sensible women would do in such a situation: gone to lunch.

Browne met Wyllie, who inherited her late businessman husband's $400 million empire after he died some 14 years ago, on a blind date at the 2013 Logies.

Justin “Juzzy” Drew and his wife Pippi are heading back to court in January.Credit:Facebook

To honour their auspicious meeting, they had an edible Logie on top of the three-tier wedding cake.

The tawdry details of Waterloo hoteliers Pippi and Justin Drew's drunken clash with police outside their $2 million Rose Bay home made for fascinating reading in the Murdoch press last month. However, one particularly intriguing detail was missing.

Justin Drew is a direct descendent of one of Australia's wealthiest families, his forebears being the founders of the once-mighty Grace Brothers retailing empire.

His mother is Julia Drew, the daughter of Bertram Augustus ''Mick'' Grace, the son and nephew of the Grace Bros founders.

In police bodycam video played in court, the couple – who operate the Cauliflower Hotel in Waterloo – scream and swear as Justin Drew wrestles with officers while they are handcuffed and placed in police wagons.

Justin Drew has pleaded not guilty to three counts of assaulting a police officer in execution of duty causing actual bodily harm and one count of resisting or hindering police in the execution of duty.

You can’t keep a good woman down, or off the trapeze: Kerri-Anne Kennerley.

He has an AVO out against his wife, who has been charged under her maiden name, Pippi Susan Billingham, however, the couple remains together. Mrs Drew pleaded not guilty to one count of resisting or hindering police in the execution of duty.

The case is due in court on January 18.

No safety net, no harness and no emergency ropes.

At the age of 67, Kerri-Anne Kennerley is not shy of taking a few risks when it comes to her debut as a musical theatre star, having landed the role of Berthe in John Frost's musical Pippin.

KAK is doing the role just as Andrea Martin did in the Broadway production, being hoisted some six metres in the air with nothing but the muscular arms of a fellow trapeze artist hanging onto her waist as she swings and flips upside down while she sings her show-stopping number.

While not the main role, Berthe is Pippin’s saucy grandmother and has a show-stopping scene in the production.

What could possibly go wrong?

The showbiz icon has been preparing for her gruelling rehearsals with a bit of pampering at the Elysia Wellness Retreat in the Hunter Valley, sticking to a strict vegetarian and no-booze diet.

"I feel fabulous," she told PS. "You know, I've scaled down the side of Channel Nine Willoughby and the GTV Tower in Melbourne, Lindsay Fox paid me to go up in a Black Hawk chopper from which I dangled my legs out the door without a harness on and I've been down a few flying foxes over the years … This is a piece of cake, isn't it?"

From Monday week she goes into intense rehearsals with international trapeze guru Preston Jamieson from the US, who has been in quarantine since arriving in Sydney a week ago.