The skulls of urban red foxes are getting smaller as they adapt to their city environment, according to a new analysis.

After studying hundreds of fox skulls, researchers in Scotland found the faces of city dwelling red foxes are changing as they adapt to urban areas.

Snouts of urban red foxes are shorter and wider than those of rural foxes, helping them scavenge through dustbins and break into packets of discarded human food.

Urban foxes also have smaller bones around the brain and fewer differences in morphology between male and females overall, the researchers claim.

Urban foxes show physical changes consistent with ‘domestication syndrome’ – similar to the domestication of dogs thousands of years ago. 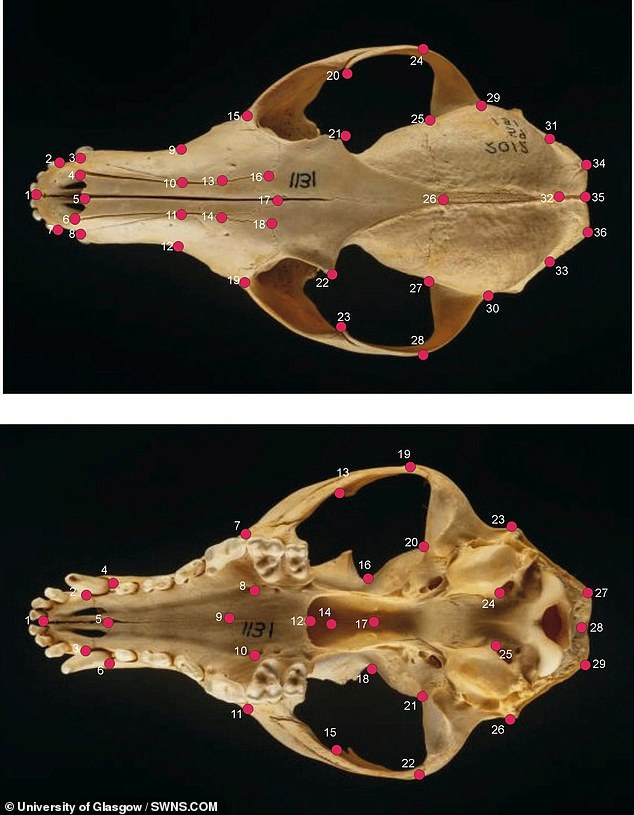 The top panel is the dorsal or top view of a fox skull, with the red dots marking out the jaws (1-15) and brain (25-36). The bottom panel is the ventral view, or underside, of a fox skull. The brain would be within 20-29, the jaws 1-10. These red dots provide coordinates that allows researchers to measure the geometry of shape 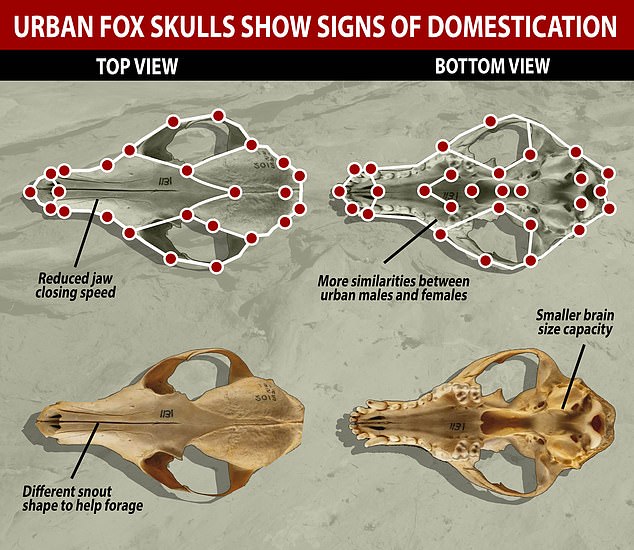 ‘We saw urban foxes had a smaller brain size capacity but also a different snout shape that would help them forage within urban habitats,’ said lead author Dr Kevin Parsons at the University of Glasgow.

‘There was also less of a difference between males and females in urban foxes.

‘The way urban and rural foxes differed matched up with a pattern of fox evolution that has occurred over millions of years between species.’

Cities have a major effect on the habitats available for wild populations, changing how they access food and shelter.

However, some types of animals, such as foxes, are especially good at living within cities and are often seen in pedestrianised areas, even in daylight. 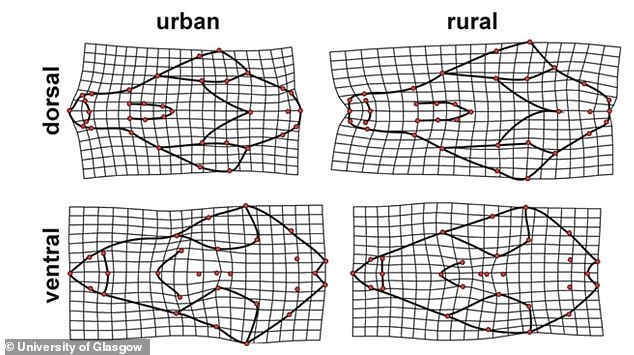 Comparison of top and bottom view of the red fox skulls for both rural and urban dwellers. Top (dorsal) view shows the urban dweller has become smaller, with a wider snout shown by ventral (underside) view

Red foxes are prevalent within several cities within the UK, where they have become well-established, the research team claim.

To assess whether the morphology of urban red foxes had changed compared to their country-dwelling counterparts, they compared 274 skulls of red foxes from London and the surrounding countryside.

They found that urban foxes had a smaller brain size capacity and a different snout shape that would help them forage within urban habitats. 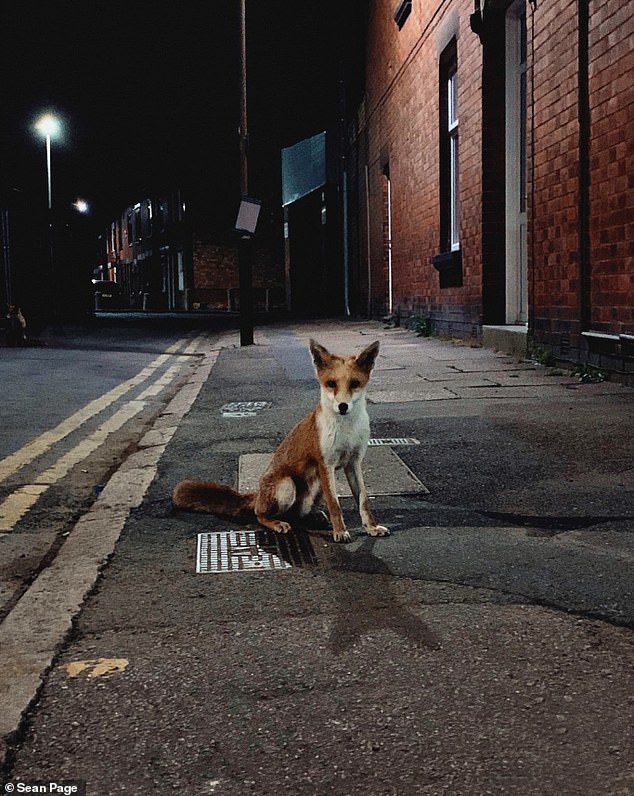 While urban foxes are certainly not domesticated, they are changing in ways that move them closer to what is seen in many domesticated animals

There was also less of a difference between males and females in urban foxes – in the urban sample, the gender gap in skull size had shrunk by 28 per cent.

These changes are expected during what the team call the ‘domestication process’ – the transition from a wild animal to a domesticated one over a certain time period.

‘So in other words, males and females are more similar looking to each other in the city and this is something that actually happens during domestication in many animals,’ said Dr Parsons.

While urban foxes are not domesticated, they are changing in ways that move them closer to what we see in many domesticated animals.

WHAT IS SEXUAL DIMORPHISM?

Some animals show high levels of sexual dimorphism – meaning they show big differences in their physical characteristics aside from their sexual organs – partly to attract mates.

For example, in peacocks, males are normally brightly-coloured with large lustrous tail feathers, compared with the female, which has more subdued colouration.

Other examples of sexual dimorphism include antlers that are largely only found in male deer and the striking mane of the male lion.

What’s more, environmental conditions that may have occurred during the initial phases of domestication for our current pets like dogs and cats were likely similar to the conditions experienced by urban foxes today.

In effect, adapting to life around humans actually primes some animals for domestication, called ‘domestication syndrome’ in the research paper, published in Proceedings of the Royal Society B: Biological Sciences.

The changes are primarily found to be involved with snout length, with urban individuals tending to have shorter and wider muzzles, smaller braincases and overall reduced sexual dimorphism relative to rural individuals.

A more shortened, robust skull was present in females, while the region of bone above the cheek – the zygomatic region – was greatly reduced relative to males.

Overall, shorter snouts seem to suit the transition to snuffling for discarded human food in piles of bin bags, the authors suggest – and less for quickly trapping fast-moving prey.

‘A shorter snout, as found in urban foxes, should confer a higher mechanical advantage but with reduced closing speed of the jaw,’ the team say in their research paper.

‘This may be advantageous in an urban habitat where resources are more likely to be accessed as stationary patches of discarded human food.

‘These foods may require a greater force to access them.’

But these changes were not caused by ‘random mutations’ having an effect, like the way many of us tend to think evolution occurs, according to Dr Parsons.

‘This is more hardcore evolutionary thinking which is pushing the field a bit at the moment,’ he told MailOnline.

‘There is an idea that there are developmental biases, so that when variation arises it is product of both current and past evolution – this would be like how all tetrapods have four appendages, there is a bias that locks in that trait.

‘In the case of these foxes we see that the way they evolve matches up to how fox species have changed over millions of years.

‘It’s not to the same degree of difference between urban and rural foxes but lengthening and shorting of the snout and shrinking and increasing of the brain case is what we see amongst fox species.

‘This suggests the traits are linked by deep-seated programming of development which dictates what is possible.’

The number of red foxes in urban areas of England has soared almost fivefold in 25 years, meaning they’ve become a more common sight in back gardens. 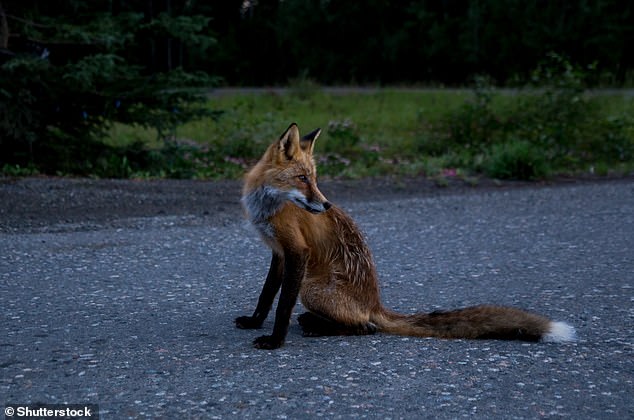 It has been known for some time that cities create new habitats for wild populations. While many can’t cope, it is recognised that some types of animals are especially good at living within cities. Red foxes are prevalent within several cities within the UK and elsewhere where they have become well-established

Despite drawing similarities to domestic dogs, the domesticity of the richly-plumed red fox is questionable.

In the UK it is legal to keep the red fox as a pet, despite them not having been domesticated, which only happens over a long period of time through selective breeding.

The Royal Society for the Prevention of Cruelty to Animals (RSPCA) does not condone the keeping of foxes as pets for the reason that ‘foxes are wild animals, their needs are very specific and require specialist care’.

Urban foxes can also carry a range of parasites and diseases that can affect the health of people and their pets.

However, the government’s Department for Environment, Food and Rural Affairs says dogs, which are susceptible to a similar range of diseases as foxes, are probably a much more important source of infection for humans.

BOTH FOXES AND DOGS CAN CARRY PARASITES TO HUMANS 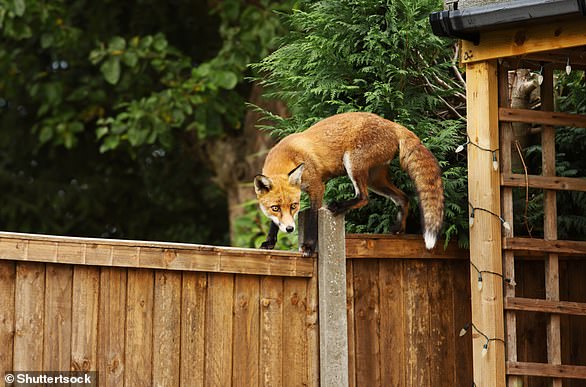 With the current coronavirus lockdown, sightings of foxes on quieter streets are likely more common

Foxes can carry a range of parasites and diseases relevant to the health of domestic pets and people.

Despite this, there is scant evidence that foxes are actually an important source of the infection.

Instead, domestic pets and particularly dogs, which are susceptible to a similar range of diseases as foxes, are probably a much more important source of infection for humans.

Foxes (and dogs) carry a number of internal parasites.

For humans, the most important are probably the roundworm (Toxocara canis) and Echinococcus, which causes hydatid disease.

These diseases are acquired by ingestion of worm eggs passed in the droppings of an infected animal.

Foxes are also susceptible to Weil’s disease (Leptospirosis), which can be passed on to domestic pets and humans via contact with their urine.