Home » Lifestyle » The space rock that doomed the dinosaurs was shrapnel from a comet that flew too close to the sun, a Harvard study suggests

The space rock that doomed the dinosaurs was shrapnel from a comet that flew too close to the sun, a Harvard study suggests

About 66 million years ago, a space rock more than 6 miles wide collided with Earth, striking land that is now part of Mexico.

The impact sparked wildfires that stretched for hundreds of miles, triggered a mile-high tsunami, and released billions of tons of sulfur into the atmosphere. That gaseous haze blocked the sun, cooling the Earth and dooming the dinosaurs, along with 75% of all life on the planet.

But the origins of that dinosaur-killing rock, named Chicxulub, have remained a mystery.

Most theories suggest Chicxulub was a massive asteroid; hundreds of thousands of these rocks sit in a donut-shaped ring between Mars and Jupiter. But in a study published Monday, two Harvard astrophysicists suggested an alternate idea: that Chicxulub wasn’t an asteroid at all, but a piece of shrapnel from an icy comet that had been pushed too close to the sun by Jupiter’s gravity.

Asteroids and comets are both classified as space rocks by NASA, but they differ in key ways: Comets form from ice and dust outside our solar system and are generally small and fast-moving, whereas rocky asteroids are larger, slower, and form closer to the sun.

“We are suggesting that, in fact, if you break up an object as it comes close to the sun, it could give rise to the appropriate event rate and also the kind of impact that killed the dinosaurs,” Avi Loeb, an astrophysicist and cosmologist at Harvard University and co-author of the new study, said in a press release.

The solar system acts like a ‘pinball machine’ for comets 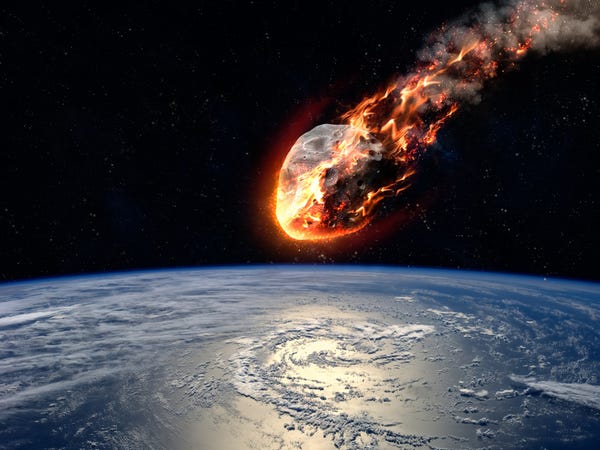 Most asteroids come from the asteroid belt between the solar system’s inner and outer planets. But NASA scientists who keep tabs on space objects that pass near Earth have yet to figure out where Chicxulub came from.

In the new study, published in the journal Scientific Reports, Loeb and his co-author, Amir Siraj, suggest Chicxulub didn’t come from the asteroid belt. Rather, they say it more likely originated outside our solar system, in an area called the Oort cloud.

Think of the Oort cloud as ring made of 1 trillion pieces of icy debris, which sits beyond the farthest reaches of the solar system, surrounding it. It’s located at least 2,000 times farther away from the sun than Earth is. Comets that originate in the Oort cloud are known as long-period comets because they take so long to complete one orbit around the sun.

But these comets can sometimes get pulled off-course by the gravity of massive planets like Jupiter. Such a tweak to a comet’s orbit could send it hurtling on a path much closer to the sun.

“The solar system acts as a kind of pinball machine,” Siraj said in the release.

Comets that get near the sun are called “sungrazers.” The new study calculated that about 20% of Oort cloud comets are sungrazers. As they approach our star, its gravity starts to pull them apart. Fragments of comet slough off and may careen toward nearby planets.

This, the study authors say, is “a satisfactory explanation for the origin of the impactor” that killed the dinosaurs. 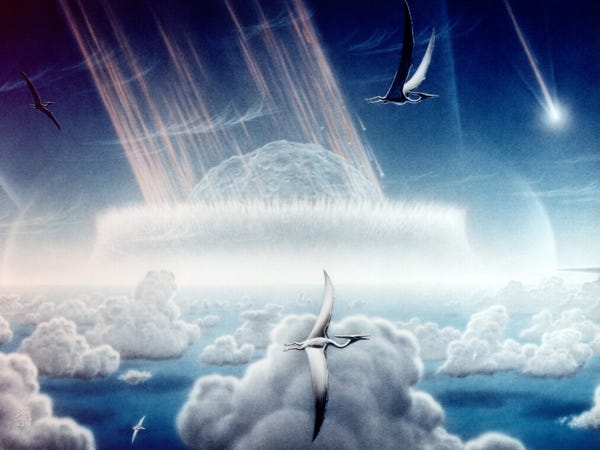 Siraj and Loeb aren’t the only scientists who think a comet, not an asteroid, doomed the dinosaurs. A group of researchers from Dartmouth College similarly suggested in 2013 that a high-speed comet could have created the Chicxulub crater.

Chicxulub hit Earth at a speed of 12 miles per second (43,200 mph), which is about 30 times faster than the speed of a supersonic jet. The resulting 100-mile-wide crater extended 12 miles into the depths of the Gulf of Mexico. Some scientists have estimated the asteroid’s power was equivalent to 10 billion of the atomic bombs used in World War II.

But not all researchers are convinced a comet caused that destruction.

Natalia Artemieva, a senior scientist at the Planetary Science Institute in Arizona, told The New York Times that comet fragments from a sungrazer would have been too small to create the Chicxulub crater. And Bill Bottke, a planetary scientist at the Southwest Research Institute in Colorado, suggested that the study overestimates the frequency of sungrazers — and, consequently, the amount of fragments those comets produce.

Existing evidence favors the idea that Chicxulub was an asteroid, “but it’s not conclusive,” Bottke told the Times. “There’s still wiggle room if somebody really wants it to be a comet. I just think making that case is really hard.”

Siraj and Loeb, however, said their theory is supported by a type of material found deep inside the Chicxulub crater and other craters in South Africa and Kazakhstan. That substance, carbonaceous chondrite, may have come from comets. Whereas just 10% of asteroids from the asteroid belt are composed of carbonaceous chondrites, the material “could potentially be widespread in comets,” the study authors wrote.

The only samples ever collected from a comet in space were brought back in 2006. They revealed that object, called Wild 2, was composed of carbonaceous chondrite. 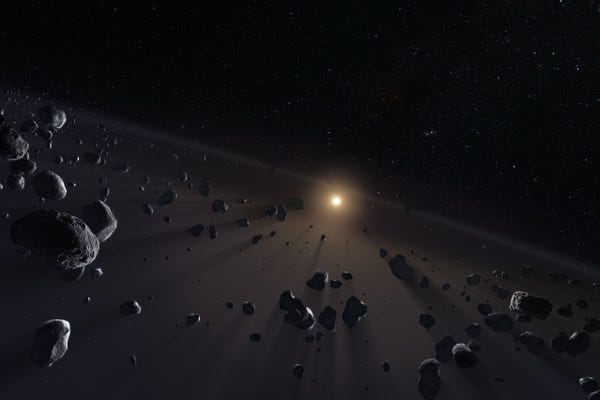 Finding the correct answer in the Chicxulub debate is useful because it could help researchers figure out the likelihood of a similar impact event in the future. Only two to three comets from the Oort Cloud have hit Earth during the last 500 million years, according to one study. By contrast, according to the Planetary Society, a Chicxulub-sized asteroid impacts Earth every 100 million years or so.

Siraj and Loeb modeled how many long-period comets get close enough to the sun to shed large fragments in the direction of Earth. Their numbers suggest 10 times more Chicxulub-sized objects hit Earth over its history than scientists previously thought.