Although mass vaccinations are in effect amid the COVID-19 pandemic, infections continue to rise in a number of states. With the Delta variant of the virus accounting for 58% of the positive COVID-19 cases in the United States (via ABC News), it’s safe to say that the pandemic isn’t over yet. Whether you’re vaccinated or not, it is still possible to test positive for the virus. While it’s unclear exactly what Wiz Khalifa’s vax status is, the rapper announced that he has COVID-19.

“Okay loved ones….sooo…..Ya boy got covid. No symptoms. Just stay away from me for a lil while,” he tweeted on July 14. Twitter users questioned the rapper’s vaccination status, with one user resurfacing a June 2020 tweet in which the rapper wrote, “Y’all can have those masks fam.” Wiz Khalifa’s COVID-19 announcement comes hours after the Foo Fighters revealed there is a positive case in their camp, forcing the band to rescheduling their show at The Forum in Los Angeles, Calif., as reported by The Hill. Although Wiz is now forced into downtime, he isn’t planning on resting. Read on to find out the rapper’s plans while he’s in recovery.

Wiz Khalifa's plans for quarantine doesn't necessarily include getting rest 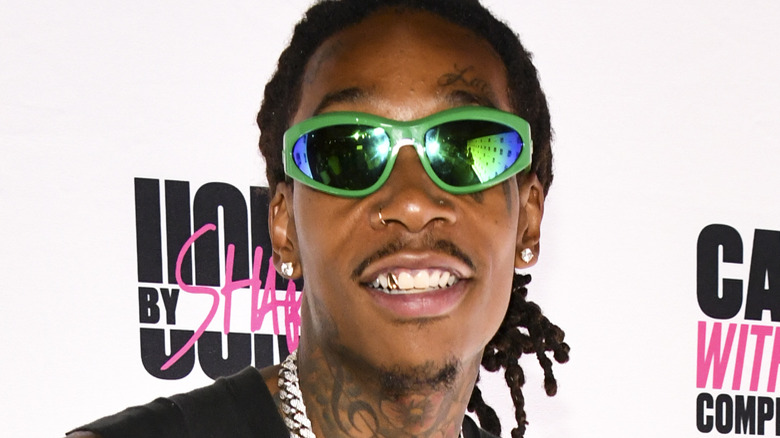 Wiz Khalifa isn’t letting his positive COVID-19 diagnosis stop him from securing the bag. Following his announcement, the rapper made a follow-up tweet regarding his quarantine plans. “While im in the house I’ll be givin y’all new content, planning raves, and readying this new project,” the “Millions” crooner wrote. Given the several projects that the rapper is working on, we assume that he’ll be making virtual moves leading up them. Most recently, the multi-platinum selling artist’s Khalifa Kush cannabis brand announced a partnership with a Michigan brand to launch premium products (via Greenway).

Additionally, the “420 Freestyle” rapper is gearing up for his role as Parliament leader and funk legend George Clinton in forthcoming biopic, “Spinning Gold,” according to Deadline. The biopic is written and directed by Timothy Scott Bogart, the son of 1970s Casablanca Records chief Neil Bogart. Alongside Wiz stars Tayla Parx as Donna Summer, Ledisi as Gladys Knight, and Jason Derulo as Ronald Isley. Production is underway in New Jersey as of June 2021. Get well soon, Wiz!