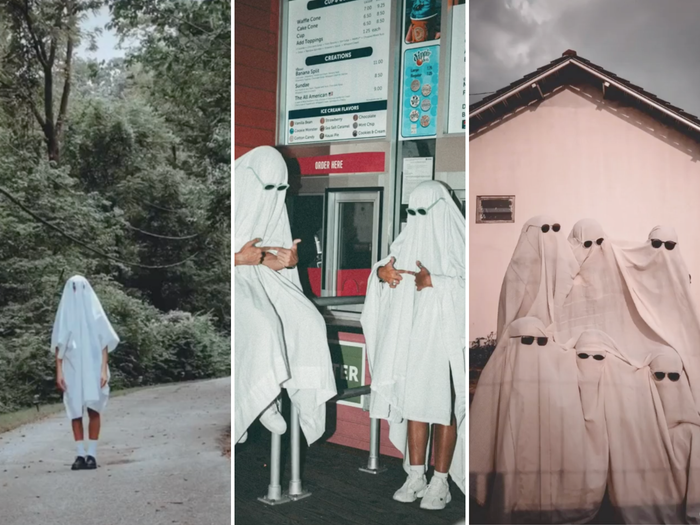 The trend, which is associated with the hashtag #ghostphotoshoot, sees people making their own ghost costumes, cutting out holes for eyes in bed sheets or wearing sunglasses, fishnets, Doc Martens, or other assorted clothing items to accessorize and take aesthetic photos.

When Santa Monica goes to sleep, the ghosts come out to play 👻 ib: @jackjanson88📸: @alecohlaker2nd 👻: @katjohanab

The hashtag #ghostphotoshoot has amassed over 2.2 billion views on TikTok alone, and nearly 13,000 posts on Instagram. Although not every video associated with the hashtag is actually a ghost photoshoot (TikTokers frequently tag trending hashtags in their posts to try to boost their spread on the platform) the numbers are a testament to the challenge's popularity on the app.

However, as the trend has spread online, it's drawn criticism. Numerous people expressed shock at the trend, saying costumes reminded them of Ku Klux Klan robes. The Ku Klux Klan is an explicitly white supremacist organization that terrorized and killed Black people throughout the 1800s and 1900s. They say their costumes represent Confederate ghosts.

After New York Times technology reporter Taylor Lorenz tweeted a thread of ghost photoshoot TikToks, led by a group image that featured multiple people in white sheets, critics on Twitter said the images and the trend itself were tone deaf in the current political climate.

This is far from the first time that bedsheet ghosts have emerged in pop culture, or internet culture at large. As Natalie Shure wrote for The Daily Beast in 2017, the costume has made appearances in iconic media ranging from "Charlie Brown" to "SpongeBob SquarePants." While early depictions of ghosts in works like Shakespeare's "Hamlet" skewed more realistic — the ghost of Hamlet's father wears armor, for example — they presented challenges for artists to differentiate between ghosts and humans. Ghosts started appearing in burial shrouds, morphing into the billowing sheet imagery we associate with ghosts today.

Bedsheet ghosts, Shure wrote, became a popular costume during Halloween's earliest years in the United States. The costume fell more out of fashion after the Second World War due to a variety of factors including changing perceptions of ghosts in popular culture. After the Ku Klux Klan became a part of American consciousness and, Shure wrotes, the costume brought about "horrific new connotations for white bedsheets, which now evoked hatred rather than holiday fun."

The image of the bedsheet ghost continued to appear in pop culture through the 20th century and into the 21st, featured in media like "Scooby Doo," "E.T.," and Snapchat photo shoots.

KKK garb and sheet ghosts share visual and symbolic elements, and this isn't the first time it's been pointed out

While the bedsheet ghost became a pop culture symbol that persisted through the latter half of the 20th century, that doesn't fully divorce its connections the Klan outfit, according to David Cunningham, the chair of the Department of Sociology at Washington University in St. Louis and the author of "Klansville, U.S.A.: The Rise and Fall of the Civil Rights-Era Ku Klux Klan,".

"The KKK's use of white robes and hoods dates to the group's origins in the 1860s, and the now-familiar uniform of the Klan was formalized in the early 20th century," he told Insider via email.

"The 'ghostly' imagery of these robes was intentional, as the KKK's original aim was in part to portray spectral figures that would terrorize its targets. Today, the Klan's white sheets are perhaps the most widely-known and resonant symbol of organized racism, and as such they clearly echo in 'ghost' costumes such as the ones we're seeing on TikTok," he said.

This isn't the first time that the shared symbolism between bedsheet ghosts and KKK robes have been pointed out, or even satirized. In the seventh episode of "South Park," titled "Pinkeye," Cartman, initially dressed as Hitler, inadvertently ends up dressed as a member of the KKK after the school principal makes him an impromptu "scary ghost costume."

Local news station KCRA 3 also reported on a 2016 incident in which three Florida high school students were suspended after wearing what appeared to be KKK costumes to school. KCRA 3 reports that the students claimed that they were dressed as ghosts.

Jack, 15, told Insider that a few days before doing the photoshoot, he was listening to Phoebe Bridger's "Motion Sickness." The cover for that particular album, 2017's "Stranger in the Alps" features a depiction of a ghost with human arms.

Jack said that he was "craving that Halloween vibe," and that after picking up a sheet at Hobby Lobby, he had a clear vision for the photoshoot that included his Doc Martens, white socks that went up to his shins, and the sheet itself. He told Insider that he never expected his video to blow up on TikTok.

I recommend everyone doing this trend bc it’s so much fun!! @belem_a_21❤️##greenscreen ##ghostphotoshoot ##wigs ##HelloFall ##spookyseason

There are now countless ghost photoshoot videos on TikTok, featuring myriad styles and takes on the trend. People around the world are taking ghost photos and putting their own spin on it. Some even bring their pets into the picture as well.

On Twitter, the trend received criticism for the ghost costume's similarity to KKK robes

New York Times technology reporter Taylor Lorenz tweeted a thread of ghost photoshoot TikTok videos on Tuesday, September 22. The thread began with two photos of a group of people together in bedsheet ghost costumes, several of them wearing sunglasses over the sheets.

The thread sparked a wave of criticism of the trend, with people pointing out that the costume was reminiscent of KKK garb and that the photos had the potential to evoke much different reactions other than the front-facing whimsy that's pervasive on TikTok.

2020 has seen massive upheaval against racial injustice following the killings of Black Americans including George Floyd and Breonna Taylor by police. And, as NBC News' Janell Ross wrote in June, "black Americans are exhausted. They are grieving. They are angry."

On Twitter, some said that a social media trend like this felt wrong for 2020, or that ghosts weren't the first things they thought of when they saw people in white sheets. Others defended the trend.

Jada, 16, commented under a viral quote retweet of Lorenz's original tweet, remarking on the discussion itself and what she saw as white people telling Black people in the comments to "shut up" when they "clearly [felt] uncomfortable."

Jada told Insider over text that when she first saw the trend, she initially thought she was seeing KKK imagery. "It made me uncomfortable bc of the history behind the kkk and seeing a bunch of white kids in white sheets just doesn't sit right with me at all," she said.

On Twitter, Lorenz said that she was sorry for any offense her thread may have caused. She told Insider that she felt that she should not have led with the group photos because she thought that it misrepresented the photo challenge, and said that the photos and videos read differently on Twitter than on TikTok given that reposting them strips them of their original context.

"I just think that context matters for all of this stuff so much, and to strip context and strip agency from the people who have participated in this and try to reframe it is kind of disingenuous," Lorenz told Insider.

On TikTok, people pointed out similarities between the ghost costumes and KKK robes as well

Criticism of the trend isn't limited to Twitter. While comments remarking on the ghost photos or tagging friends to participate are dominant in comment sections on TikTok, several videos also had comments that pointed out the visual similarities between the sheets and KKK garb.

One video from @frankiesfun features people in both white and red sheets (some members of the KKK wore red sheets as well to distinguish rank) and garnered a significant number of comments regarding the sheet color choice. One comment reads, "Y'all lowkey look like klan members hahahha." Another reads, "soooo here's the thing. Red and white…. maybe not the best combo."

@frankiesfun addressed the criticism in the comments, writing, "We genuinely did not know that red was a bad color for this trend. I'm sorry if anyone was offended. Our intention was to make it different."

Many creators had pure intentions participating in the trend, but that doesn't mitigate its effect

David Cunningham, the sociology professor, said that a "lack of a broad public conversation that acknowledges and addresses the nation's history of racist violence" can lead to a blind spot among white creators when it comes to the impact of their actions, however well-intentioned, on communities of color.

"Working to understand the experiences of others builds an awareness of how this sort of ostensibly-harmless social media trend can and does tap into a history of injustice," he told Insider.

Context, and the nature of the photoshoots themselves, is important. Jack, the 15-year-old who has largely been credited with starting this particular iteration of the trend on TikTok, said that he hadn't gotten any comments related to the KKK until people in larger groups began to do it. He also said that he had seen other videos in which a group of people were holding an American flag or were near a bonfire.

"In my head, obviously I would never have that intent with a photoshoot I have," he told Insider. "But definitely there are some people that are getting angry, and I totally understand that."

Jack said, however, that he thought that the trend had resonated on TikTok because it was a way to get good photos without having to show your face. The anonymity of the trend was also an appeal, as is the trend's ability to help people get into the Halloween spirit.

Lorenz said that she thought that the trend was a means of "disengaging from reality, and building this other spooky world."

While those participating in the trend may have pure intentions, comments on TikTok and further criticism on Twitter show that its impact doesn't always align.

Related News:
TV and Movies
'Hocus Pocus': 3 of Mary Sanderson's Funniest Lines
'90 Day Fiancé: The Other Way': Sumit's Fears His Wife Will File Charges Against His Family
Where has The Mandalorian’s Cobb Vanth appeared in Star Wars before?
Michael Myers' Mask in 'Halloween' Is Actually a 'Star Trek' Character's Death Mask; It Was Chosen Over a Clown's
Gina Kirschenheiter is serious about boyfriend Travis Mullen — Here's when the RHOC star plans to get married
Recent Posts
This website uses cookies to improve your user experience and to provide you with advertisements that are relevant to your interests. By continuing to browse the site you are agreeing to our use of cookies.Ok