’Tis the time to shop: retailers looking for strong Yuletide

Retailers are expecting a very merry Christmas, with a quarter tipping sales growth of more than 10 per cent as cashed-up shoppers click their way to filling up their Santa sacks.

But CBD stores believe their best Christmases are behind them. Many predict COVID-19 has changed the traditional trip to the city forever, while others fear even those who make the pilgrimage will struggle to find everything on their shopping lists. 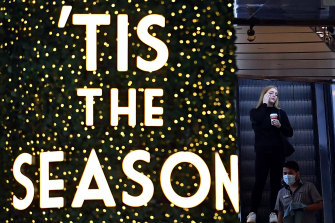 Retailers are looking forward to a strong Christmas, but finding a bargain or getting exactly what you want may be a challenge.Credit:Sam Mooy

The annual Christmas survey of retailers by Deloitte, released on Tuesday, found 80 per cent expected to see sales growth this Yuletide, up 20 percentage points on the same time last year.

More than half expected sales to bounce back rapidly after lockdowns while a quarter believed they would enjoy at least a 10 per cent lift in Christmas sales. Three-in-five said their sales would have some digital link, either through click-and-collect or direct online orders.

The confidence is locked into the coming 12 months, with 90 per expecting trading conditions to improve or stay the same.

Deloitte’s national leader of its retail, wholesale and distribution group, David White, said there was a lot of confidence in the sector.

“Australian retail has been on a genuine rollercoaster ride since the onset of COVID-19, with supercharged demand in some market segments and others heavily impacted by lockdowns and changes in consumer habits,” he said.

“With customers fatigued by months of lockdown, when they step out and into stores, retailers offering new product ranges, personalised marketing, seamless experiences across all channels and anything ‘new and different’ are most likely to be the winners this holiday season.”

But COVID-19 is also shaping as a long-term factor in shopping habits.

Almost half of the survey’s respondents believed it would take up to two years to return to pre-virus trading levels at their CBD outlets. A quarter did not believe they would ever get back, in part due to the number of Australians who had taken to working from home.

Global supply chain issues caused by COVID-19 will also play on Christmas this year. Bargains are likely to be few and far between due to high shipping costs.

That’s if you can find what you want. Just 52 per cent of those surveyed expected all their stock orders to be received for the Christmas sales peak, which occurs around the two Saturdays ahead of December 25.

“Global supply chains have come under pressure as the world’s consumers emerge from the pandemic, and Australia is not immune from the fallout,” Mr White said.

A key part of the Christmas period for retailers is finding sufficient staff, with signs businesses in states and territories emerging from lockdowns are ramping up their efforts to boost their sales forces.

Figures from the National Skills Commission showed a 7.8 per cent jump in online job advertisements through October to a 13-year high of 250,900.

Ads in Victoria and NSW are now almost 49 per cent up on their pre-pandemic levels while they are up by 65.9 per cent in Tasmania.