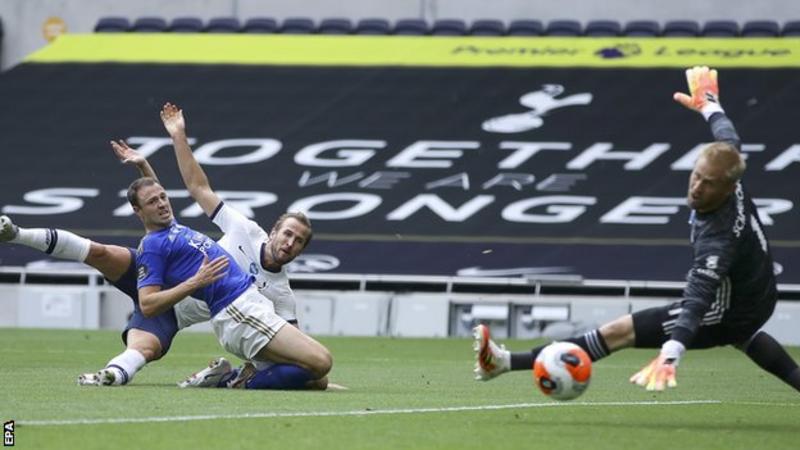 Tottenham boosted their chances of Europa League football next season and inflicted a huge blow on Leicester’s Champions League ambitions with a superb performance.

Brendan Rodgers’ Leicester side have been in the Premier League’s top four for much of the season but this devastating away defeat leaves them with a difficult task going into their final league game next Sunday.

The Foxes finish the season against fifth-placed Manchester United, but should the Red Devils beat West Ham on Wednesday and claim a draw at the King Power, they will be assured of a top-four finish at the expense of Leicester.

Leicester did have chances but could not find a way past an inspired Hugo Lloris, who made a string of superb saves to deny Jamie Vardy, Ayoze Perez and Demarai Gray.

Jose Mourinho’s side move up to sixth in the table, two points clear of Wolves, but Nuno Espirito Santo’s side have a game in hand.

Spurs were in disarray when chairman Daniel Levy made the shock decision to sack the popular Mauricio Pochettino and replace him with ex-Chelsea and Manchester United boss Mourinho.

They were 14th in the league and had won just three of their opening 12 league games this season, but the Portuguese boss has utilised his vast experience to turn things around.

Though a desperately poor loss against Sheffield United left him questioning the mentality of his players, their overall form has been excellent since the restart, and they have collected five wins and two draws from eight games.

While clinching European football for next season looked unlikely earlier in the campaign, a late season surge means seventh could be enough for a Europa League spot, depending on the winners of the FA Cup.

Spurs’ finishing in the first 45 minutes was clinical – forward Son seeing his shot deflect in off James after wrong-footing Kasper Schmeichel, before England captain Kane showed his class.

The striker, who recently passed 200 career goals, has tormented Leicester whenever he has played against them and took his tally to 16 in 14 games against the Foxes with a cool, left-footed finish and a brilliant second which curled precisely into the far post past the reach of Schmeichel.

Having gone 3-0 up by half-time, there was no way back for Leicester in the second period as Mourinho’s men expertly saw out the game.

Leicester boss Rodgers had said that a European spot was their target, one which they have accomplished, but he will be distraught at his side’s capitulation since the restart which leaves them uncertain of a place in the Champions League next term.

Having been outstanding for the entire season and at one point being the closest challengers to eventual champions Liverpool, their miserable run has come at the wrong time and they have now won just two of their last eight games.

They are clinging on to fourth place but are level on points and goal difference with Manchester United, who know a heavy victory against West Ham in their next league match will leave Leicester needing a big win of their own on the final day.

They will be thankful to captain Schmeichel for making a crucial stop to thwart Son’s dipping effort, as conceding another goal would have seen them drop down to fifth on goal difference.

Leicester could easily have scored four or five goals but were unable to penetrate Lloris’ goal, the France World Cup winner keeping out top-scorer Vardy’s backheel.

And the Tottenham captain made even better stops to add to Leicester’s torment, showcasing his sharp reactions to twice repel Perez’s volley and long-range drive as well as flying saves off Gray’s long-range free-kick and Kelechi Iheanacho’s curler. 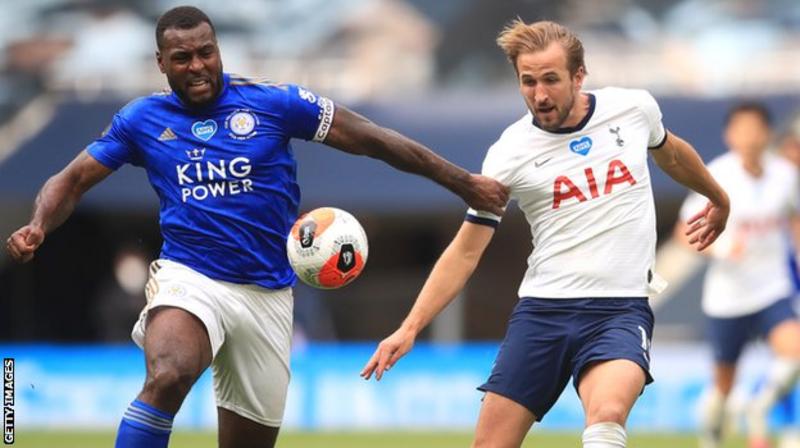 Spurs end their season with a trip to Crystal Palace, while Leicester host Manchester United in what could turn out to be winner-takes-all for a Champions League place. All 10 fixtures on the last day take place on Sunday, kicking off at 16:00 BST).

Nampalys Mendy (Leicester City) wins a free kick in the defensive half.

Attempt missed. George Hirst (Leicester City) right footed shot from outside the box is close, but misses to the left. Assisted by Demarai Gray.

Attempt missed. George Hirst (Leicester City) header from the right side of the six yard box is too high. Assisted by Demarai Gray with a cross following a corner.

Davinson Sánchez (Tottenham Hotspur) is shown the yellow card for a bad foul.

George Hirst (Leicester City) wins a free kick in the attacking half.