Victoria’s Treasury department is forecasting that the state will move from stage four to stage three restrictions in mid-September, before moving into stage two after the end of September.

Treasury secretary David Martine told a parliamentary inquiry that his department expected Victorian unemployment and contractions would be worst in the quarter ending in September due to stage four restrictions that came into full effect last week.

They then expect the economy to improve. 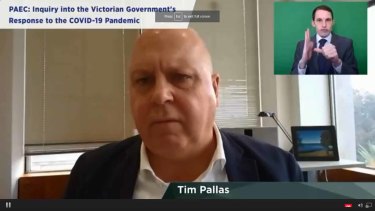 Victorian Treasurer Tim Pallas at the parliamentary inquiry on Wednesday.

"So in terms of our modelling, we’re assuming for the remainder of the September quarter that we move from stage four into stage three – so that takes us to the end of September," Mr Martine said.

"Then for the December quarter we’re assuming stage three migrating into a stage two scenario. So we’ve made those sort of assumptions and built them into our forecasts, but as the Treasurer said, we’re in an environment where it’s very, very difficult at the moment to do economic forecasting."

Treasurer Tim Pallas said the modelling was inevitably made on assumptions that can quickly change, but said those timelines were realistic.

"On the best advice that we have both from the Chief Health Officer about the adequacy of the response that we’ve put in place, the immediate impact that response is having upon the economy and the associated improvements that we’d have to the economy as they are progressively removed, I think the answer is yes, they are realistic," Mr Pallas said.

"But as we’ve demonstrated in the past, we have changed our modelling, and I can assure you we will almost certainly change our modelling again as we get close to a more precise understanding of what’s happening."

Mr Pallas added that the $24.5 billion emergency funding reserved by the Victorian government was to provide some security in "extremely volatile" circumstances and insisted that money was not a guaranteed debt for the state.

"That is not debt, nor is it a debt facility," Mr Pallas said. "It’s simply the authority that the Parliament gave for us to invest as required to deal with this crisis head on.”

The most important news, analysis and insights delivered to your inbox at the start and end of each day. Sign up to The Sydney Morning Herald’s newsletter here,  The Age’s newsletter here, Brisbane Times‘ here and WAtoday’s here.