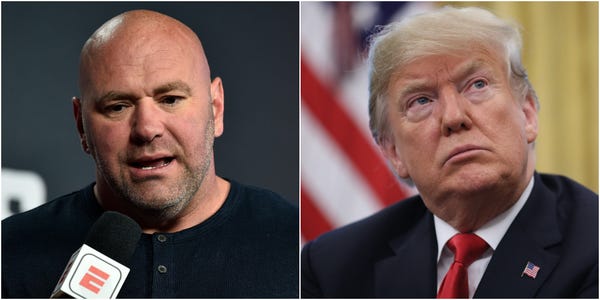 UFC president Dana White and United States President Donald Trump have both pleaded with Iran not to execute a 27-year-old champion wrestler who was sentenced to death after protesting against the country's government.

Navid Afkari was handed two death sentences by The Islamic Republic of Iran's Supreme Court on Saturday for his part in protests against the country's worsening economic situation in August 2018.

The court convicted Afkari on a number of charges including propaganda activities against the state, insulting the supreme leader, and the murder of a "plain clothes agent" — however it is reported by the People's Mojahedin Organization of Iran that he confessed to said crimes under torture.

He was also denied the chance of a retrial.

Donald Trump posted two tweets on Thursday in which he called for Afkari's sentence to be withdrawn.

"Hearing that Iran is looking to execute a great and popular wrestling star, 27-year-old Navid Afkarai, whose sole act was an anti-government demonstration on the streets. They were protesting the "country's worsening economic situation and inflation," he said in his first post.

In his second, in which he tagged Dana White and linked to an article in Fox News, Trump said: "To the leaders of Iran, I would greatly appreciate if you would spare this young man's life, and not execute him. Thank you!"

Shortly after Trump's message, White took to Instagram to relay the message while also revealing he had previously been in touch with Trump with regards to Akfari's planned execution.

"This week, the New York Times wrote a story about a very famous wrestler from Iran. His name is Navid Afkari," White said.

"He went to a peaceful protest in Iran and he's going to be executed for that. First of all, this guy is a human being, number two he's one of us, he could be one of my fighters.

"The only thing I thought to do was call the President and see what he can do to help this man. And he said, 'Let us look into it, let me talk to my administration and see if there's something we can do to save this man's life.'

"So today the president tweeted the tweet that is attached to this video. I would just like to say that I, too, respectfully and humbly ask the government officials in Iran to please not execute this man and spare his life."

Amnesty International reports that China was the only country to impose more death penalties than Iran during 2019. It also says that many of those imposed in the country were done so without meeting "international fair trial standards."