President Trump voiced support for an investigation into the murder of Fort Hood soldier Vanessa Guillén after meeting with her family Thursday about legislation that would would allow service members to report sexual harassment accusations to a third party. The #IamVanessaGuillen bill is named in honor of Guillén after she was allegedly killed by a fellow Army soldier.

“We are going to look into it very powerfully,” Mr. Trump said. “Maybe something can come out of it that will help Vanessa and others.” 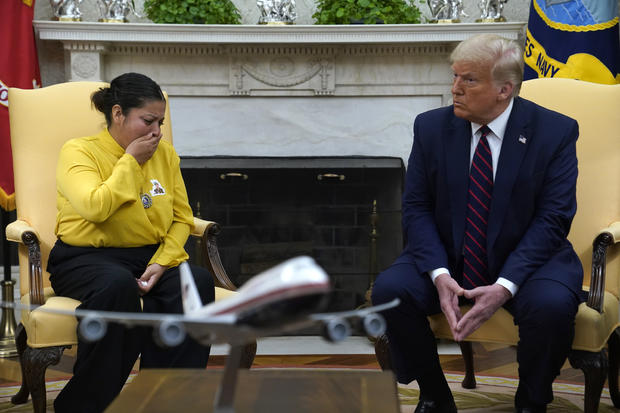 The FBI, the Department of Justice and Department of Defense are looking into her case, according to Mr. Trump. He also said he could “help” with Guillén’s funeral costs.

In a news conference after the meeting, Lupe, one of Guillén’s sisters, said Mr. Trump is supporting the bill.

“And for everyone that said, ‘The president will never meet with you, you will never enter the White House,'” he said. “Well, we just met him, we have his support.”

Guillén’s family members and their attorney Natalie Khawam spoke to a crowd prior to meeting with Mr. Trump. Lupe Guillén said the bill is about holding Fort Hood’s leadership “accountable.”

“I don’t want to hear another woman or another man was sexually harassed, assaulted, abused and raped,” said Guillén, who was wearing shoes gifted by her late sister.

“[Fort Hood’s] leadership lacked respect, safety and responsibility. They were responsible for my sister. ” the 16-year-old added. “Yet, they’re sleeping every night, I haven’t slept in three months.”

Guillén’s family said she was the victim of harassment on at least two separate occasions by superiors. In one incident, they claim, a superior walked in on Guillén as she was taking a shower. Fort Hood officials said there was no evidence to support the claim and denied any connection between her disappearance and their accusations.

According to Khawam, the bill would will allow service members to file sexual harassment and assault claims to a third-party agency, rather than their chain of command. The family is demanding that Congress pass the bill and investigate Fort Hood.

“We’re here to demand justice for Vanessa,” Khawam said. “The military needs reform. This [bill] will save lives. Our military deserves better. They deserve to be protected. We’re here to fight for them.”

The meeting with president comes as the Army secretary announced Thursday that five civilian experts will lead an independent review of Fort Hood, CBS Dallas-Fort Worth reported. The independent review will determine whether the command climate and culture at Fort Hood, and the surrounding military community, reflects the Army’s values, including safety, respect, inclusiveness, and a commitment to diversity, and workplaces and communities free from sexual harassment.

Specialist Guillén, 20, went missing from the base on April 22. Following national pressure led by her family, activists and Congress members, the Army began to treat the case as a criminal investigation on June 24 after suspecting foul play. Human remains were found almost a week later and the Army confirmed they belonged to Guillén on July 6.