‘Y’all didn’t prepare us for that!’ Twin brothers become social media stars after a hilarious video of them listening to Phil Collins’ In the Air Tonight for the first time goes viral

Twin brothers have gone viral for their hilarious reaction to hearing Phil Collins’ 1981 track ‘In the Air Tonight’ for the first time.

Tim and Fred Williams, 21, from Gary Indiana, have been broadening their musical horizons as part of their popular YouTube series First Time Hearing: Twins the New Trend, which has more than 200,000 subscribers.

In their videos, the rap-loving siblings share their initial reactions to classic songs they’ve never heard before. They’ve taken on music from the likes of Dolly Parton, Freddy Mercury, and Luciano Pavarotti, but fans believe their Collins video is their best yet. 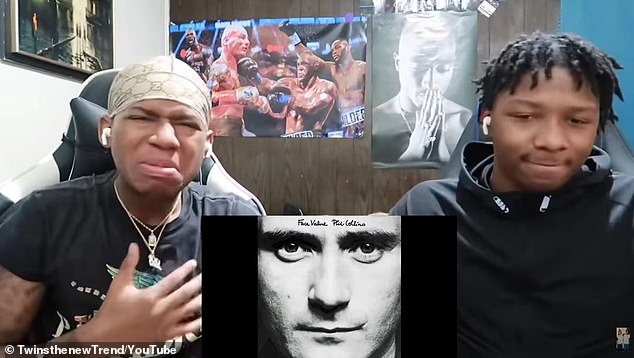 Brilliant: Tim and Fred Williams, 21, from Gary Indiana, have gone viral for their hilarious reaction to listening to Phil Collins’ 1981 track ‘In the Air Tonight’ for the first time 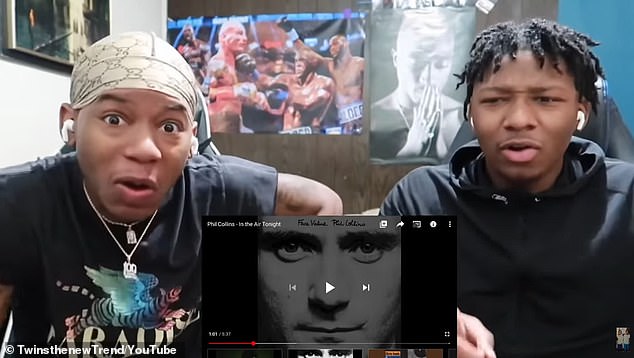 Viral: The video is a part of their popular ‘First Time Hearing’ YouTube series in which they react to classic songs they’ve never heard before

Tim and Fred had no idea what they were getting into when they started playing ‘In the Air Tonight,’ with the former noting that the song’s intro ‘sounds like a rain entrance or something.’

‘Okay… hold up,’ Tim said as he and his brother started getting into the song.

‘This is like a WWE entrance,’ he added. ‘I can see somebody walking down to the ring with this.’

They seemed to be enjoying the song, but they were truly blown away when they heard its famous drumbeat. The twins both pushed their chairs back, and Tim’s jaw dropped as he turned to look at his brother.

Fred imagined that Collins was thinking listeners were ‘sleeping’ on him, and he was going to wake them up.

‘I gotta download this to my phone,’ he said.

Fred noted that he had ‘never seen somebody drum a beat three minutes into a song’ like Collins did.

They appeared to be Collins converts by the end of the video. 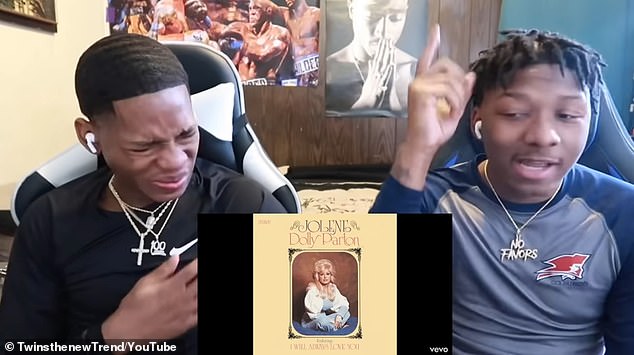 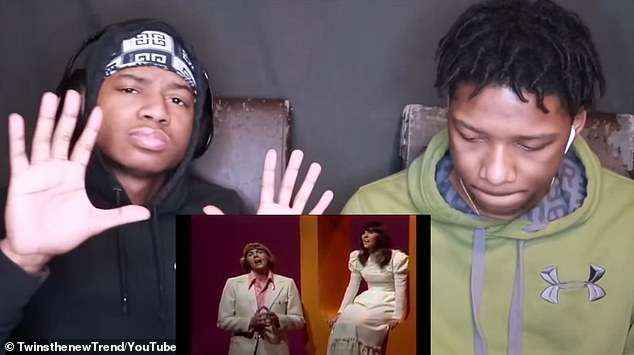 Broadening their horizons: Their mother, Tiffany King-Richardson, was admittedly surprised by their newfound appreciation for the Carpenters

‘Shout out to all the Phil fans,’ Tim added. ‘Y’all didn’t prepare us for that.’

The video has been viewed more than 440,000 times and has gone viral on Twitter, where people have been loving the twins’ reaction.

‘Yooooo y’all been sleeping on Phil Collins while I’ve been a stan since I could stand! Watch these teens hear the power of the Phil fill for the first time,’ comedian Nicole Arbour wrote, mistaking the brothers for being a few years younger than they actually are.

‘These guys reacting to Phil Collins is everything I needed to see right now,’ someone else commented, while another called the video ‘absolute gold.’ 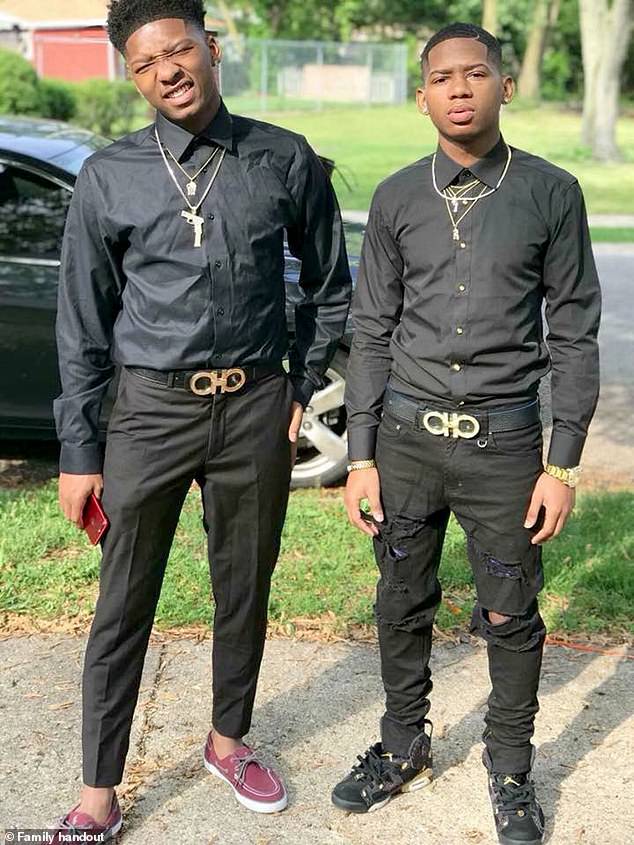 Great concept: Tim came up with the idea for the video series nearly a year ago while his Fred was away studying at Indiana State University 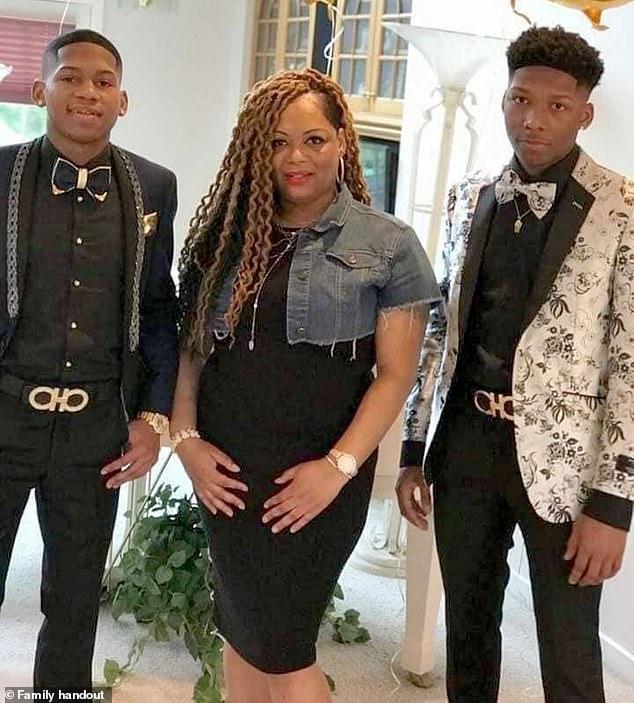 Rewarding project: Their mom (pictured) said she is ‘so proud’ of them for what they are doing 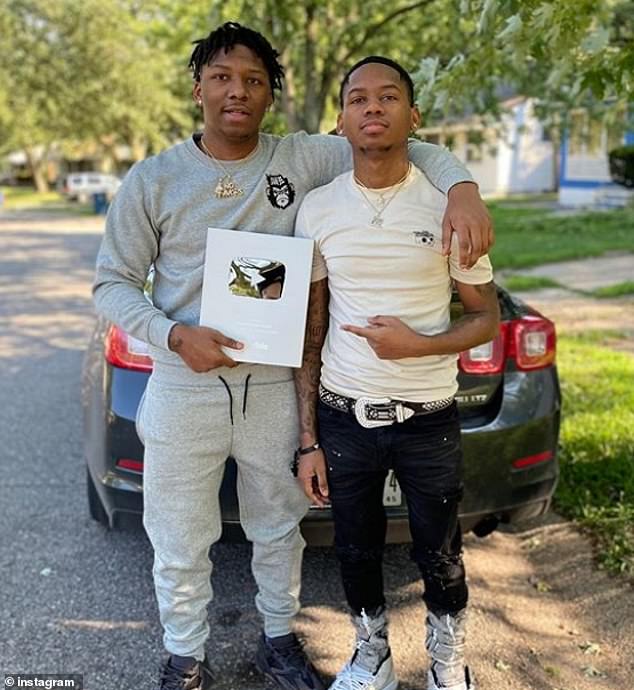 Happy: A few weeks ago, the brothers celebrated having more than 100,000 YouTube subscribers. They now have over 200,000

Speaking with People in June, they explained that Tim came up with the idea for the video series nearly a year ago while his Fred was away studying at Indiana State University.

Music has always been important to them because it served as an escape when their family members were struggling with drug addiction and their mother was in prison.

Their mother, Tiffany King-Richardson, has been out of prison and off drugs for 11 years and they sometimes work with her at Edgewater Health in Indiana to help people who are dealing with substance abuse.

She told People she is ‘so proud’ of her sons for what they are doing, though she admitted with a laugh their newfound love for the Carpenters ‘was surprising.’

‘We wanted to start a new trend to appreciate old music,’ Tim told the publication. ‘We’re open to all genres. We also want to bring people together because there’s no color to music.’