Twitter lists ‘Blue’ as an in-app purchase on the App Store, hinting it is ready to launch a subscription option

Twitter has listed a new but as-yet-unconfirmed subscription service, called Twitter Blue, in app stores, suggesting users will soon be able to try it out.

Twitter Blue now appears as a possible in-app purchase when viewing the Twitter app in Apple’s iOS App Store, listed at £2.49, or $2.99 – which is expected to be the monthly subscription price – as well as on Google’s app store for Android.

However, Twitter Blue does not yet appear to be accessible inside the Twitter app, and it’s not known exactly when it will be available to users.

The social network has not yet commented on the in-app purchase listing of Twitter Blue or confirmed any plans around its testing or public rollout.

Twitter Blue, which was leaked earlier this month, is expected to give subscribers special exclusive features that non-paying users won’t get. 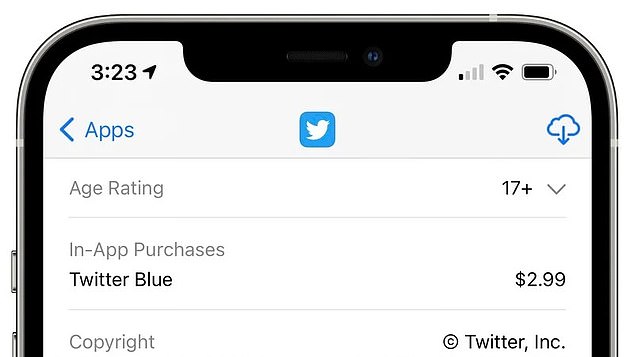 Twitter appears to have mistakenly confirmed its plans to launch a new subscription tier called Twitter Blue. Twitter Blue now appears as a possible in-app purchase when viewing the Twitter app in the iOS App Store

One of these features is an ‘Undo Send’ timer for tweets, according to Hong Kong-based app researcher and tipster Jane Manchun Wong.

Undo Send also previously leaked online in the form of an animation, showing a blue timer with the word ‘Undo’ that counts down after a user has tapped ‘post’.

Twitter previously confirmed to MailOnline that it is currently ‘testing’ Undo Send, but has since declined to provide any further details – including whether it’s part of Twitter Blue. 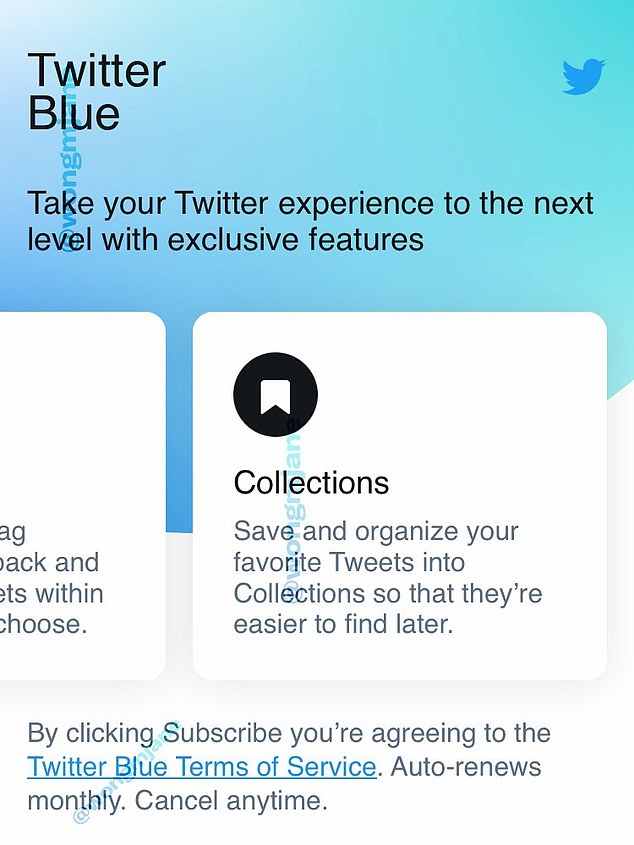 This leaked screenshot from Jane Manchun Wong shows Twitter’s description of Twitter Blue: ‘Take your Twitter experience to the next level with exclusive features

Twitter Blue will also include another feature called Collections, which will let users ‘save and organise favourite tweets’ into folders so they’re easier to find later, according to Wong, who claims to have tested Twitter Blue.

The subscription service also includes new customisable app colour schemes and the ability to customise the colour of the Twitter app icon, she claims.

Leaked screenshots from Wong reveal the Twitter Blue user interface and Twitter’s description of the service: ‘Take your Twitter experience to the next level with exclusive features’.

Twitter Blue’s main attraction is likely to be Undo Send, which is expected to give users a chance to think twice before they send potentially abusive messages to other users.

A countdown timer of around five seconds then appears, giving the user the chance to press ‘Undo’.

If users press Undo, it’s not known whether the tweet gets saved in drafts so it can be edited later. 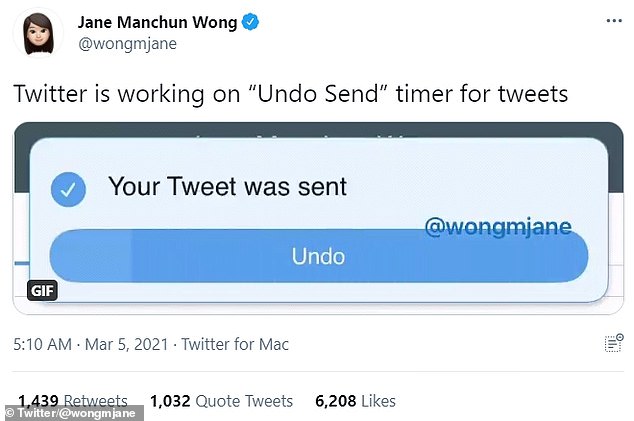 The blue bar is a timer that runs out after five seconds. App researcher and tipster Jane Manchun Wong posted the animation of the leaked feature to her Twitter account

Undo Send seemed to divide Twitter users – some pointed out that it would mean there would be a frustrating five-second delay before their tweets actually appear.

Twitter user @MasonRaeken said: ‘I just want the edit button like every other platform. I don’t want a dumb undo tweet notification every time I tweet … that’s not solving anything and becomes a nuisance.’

Another user, @jooroth18, called it ‘the next best thing to an edit button’ – the platform’s most-requested feature.

Charging money for an exclusive subscription service will help Twitter regularly turn a profit – something it had consistently failed to do until early 2018.

Twitter founder and CEO Jack Dorsey has focused on tweaking the product to try to attract more people and increase advertising revenue. 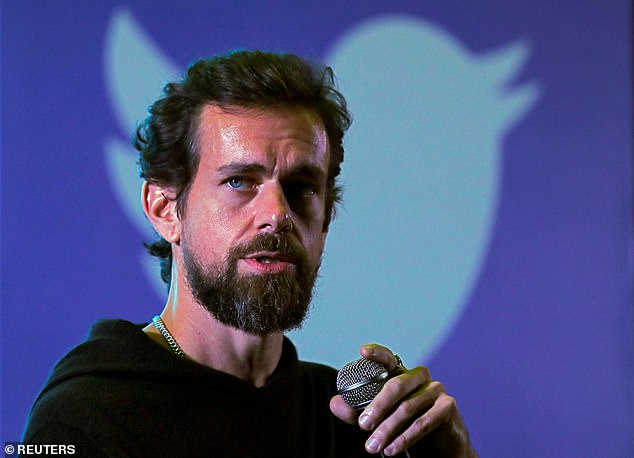 Dorsey doubled the number of characters allowed in each tweet in most languages, from 140 to 280, and tried to limit the harassment of women and minorities.

Twitter has also struck deals with media companies to allow them to live stream news and entertainment shows.

Also this week, Twitter announced Twitter Spaces, a Clubhouse competitor that lets users participate in audio chats, has been rolled out for desktop and mobile web browsers.

Previously, the service – which allows live audio conversations – was only available through Twitter’s Android and iOS apps.

Twitter also recently launched a Tip Jar for profiles, enabling users to send money to others on the platform as a way to ‘receive and show support’ on the site.

The tool adds a new Tip Jar icon to a user’s profile and gives payment options to anyone who taps it, with services such as PayPal already signed up.

So far, content creators, journalists, experts and non-profit organisations have been among the first groups to be given access to the new tool.

How does Tip Jar work? 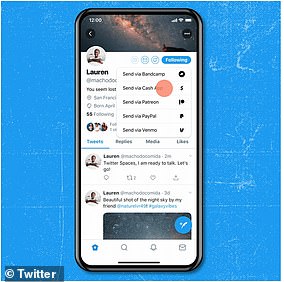 A list of payment services or platforms (pictured) will appear, including Bandcamp, Cash App, Patreon, Paypal, and Venmo, which users to can choose from to send money

Everyone using Twitter in English can send tips to applicable accounts on Twitter for iOS and Android.

To use the new in-app payment feature, users tap on a dollar bill icon located next to a person’s user name.

A list of payment services or platforms will appear, including Bandcamp, Cash App, Patreon, Paypal, and Venmo, which users to can choose from to send money.

On Android, tips can also be sent within Spaces.

For now, a limited group of people around the world who use Twitter in English can add Tip Jar to their profile and accept tips. This group includes creators, journalists, experts, and nonprofits.