Home » UFC 262: Michael Chandler vs Charles Oliveira tale of the tape: How fighters compare ahead of huge main event

UFC 262: Michael Chandler vs Charles Oliveira tale of the tape: How fighters compare ahead of huge main event

MICHAEL CHANDLER and Charles Oliveira will go toe-to-toe this weekend for the vacant UFC lightweight title.

The pair will clash early on Sunday morning in the main event of UFC 262 in Houston, Texas. 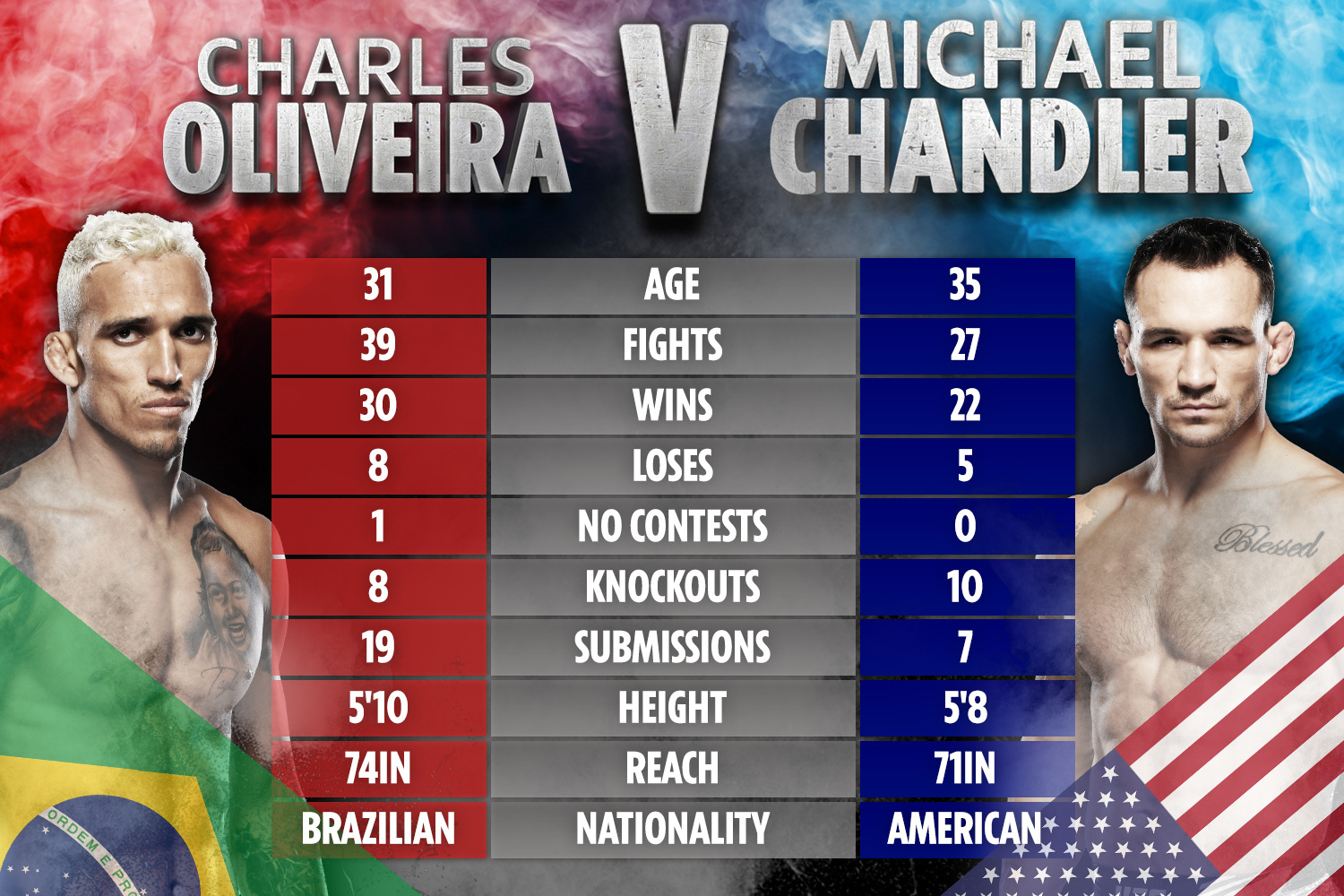 The victor of the eagerly-anticipated contest will become the successor to the throne vacated by Khabib Nurmagomedov, who retired from mixed martial arts last October.

New fan favourite Chandler goes into his maiden UFC title fight – in which he'll bid to become a two-promotion champion – on a high.

The three-time Bellator lightweight king knocked out Dan Hooker in his promotional debut on Fight Island in January to announce himself to the world.

UFC vet Oliveira, meanwhile, enters the contest in the form of his career courtesy of an eight-fight win streak – which includes a victory over former interim 155lb champ Tony Ferguson.

But how do the duo stack up ahead of their Texas tussle?

Well, SunSport is on hand to tell you everything you need to know about the pair ahead of Sunday morning's mouth-watering clash. 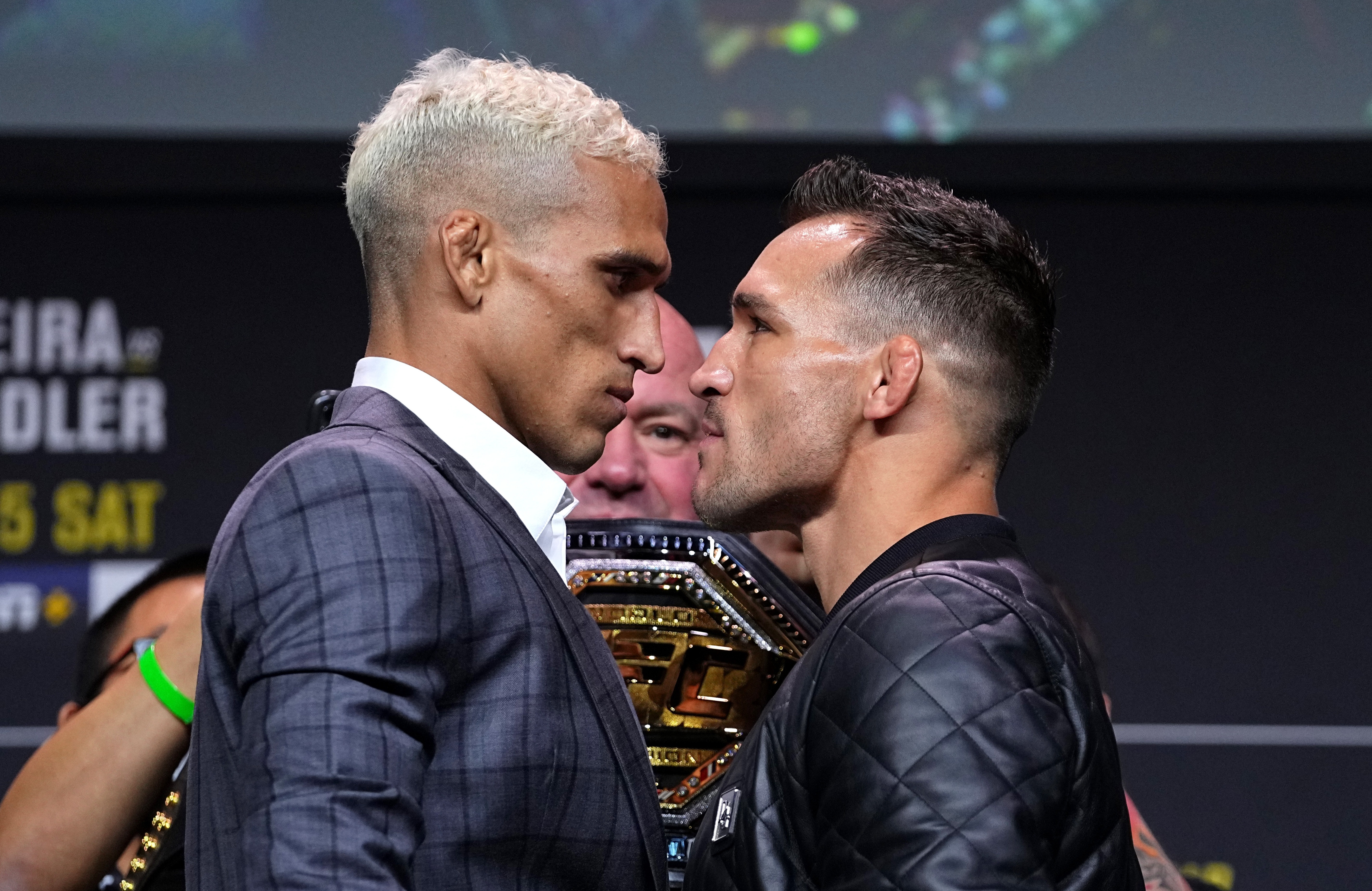 Brazilian Oliveira – a veteran of a whopping 27 UFC fights – is the younger of the pair at 31.

Chandler has close to four years on Do Bronx after celebrating his 35th birthday on April 24.

The MMA vet, however, has shown no sign of slowing down in the last few years – despite well and truly being on the wrong side of 30. 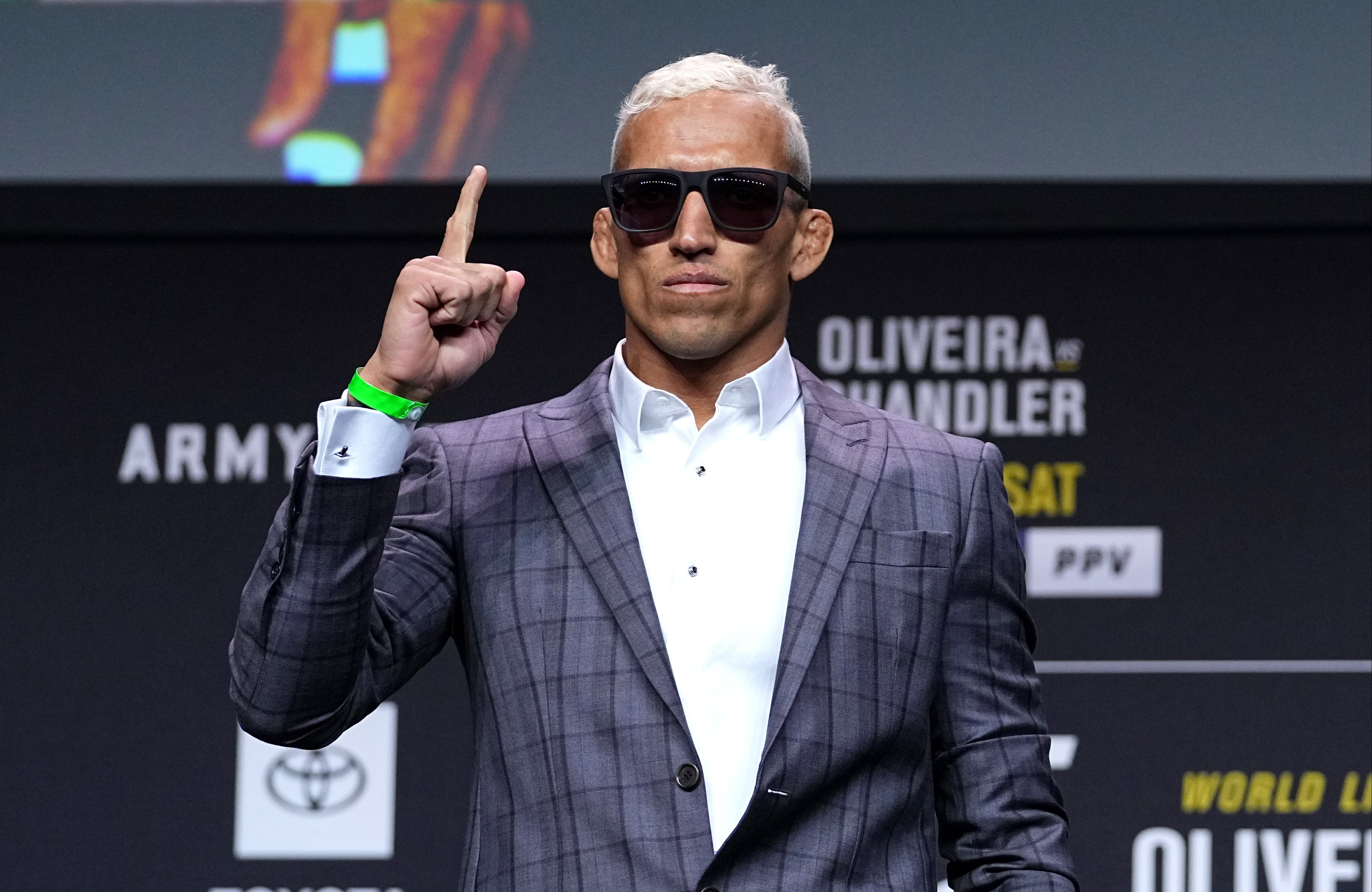 Chandler has a marked disadvantage when it comes to the physical side of the fight – despite boasting a ridiculously shredded physique.

Iron Michael – who goes into Sunday's contest as the slight favourite – stands at 5'8 and possesses a 71-inch reach.

Oliveira, on the other hand, stands at 5'10 and boasts a 74-inch reach, an advantage he'll no doubt look to utilise to prevent the explosive Chandler from closing the distance. 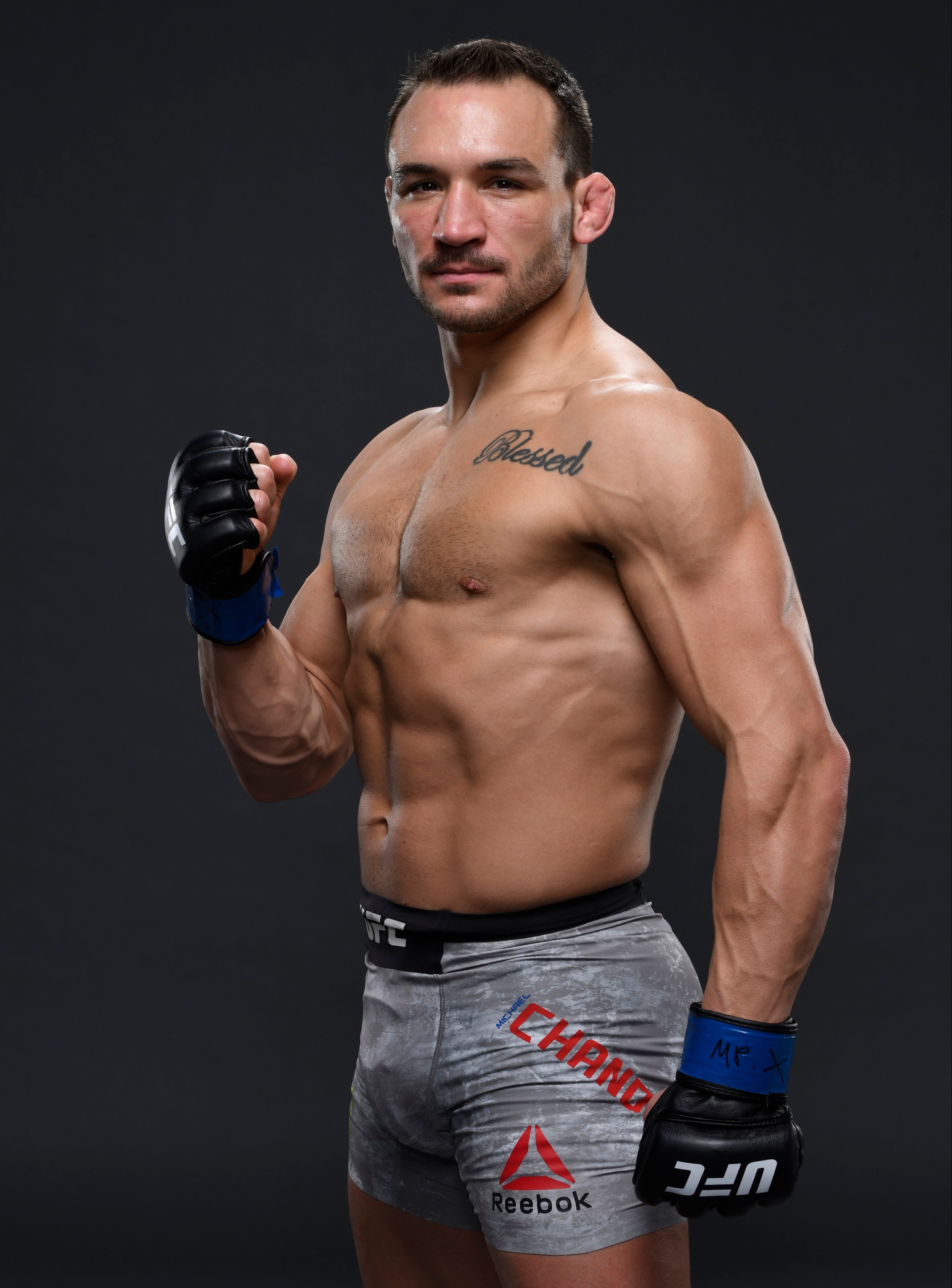 Despite being the younger man, Oliveira has had significantly more fights than Chandler.

The BJJ black belt has had 39 professional mixed martial arts fights compared to Chandler's 27, winning 30 of those contests.

A staggering 19 of Oliveira's wins have come by way of submission, with eight coming by KO or TKO and three via decision.

Chandler, meanwhile, has ten knockout victories to his name, with seven of his other 22 wins coming via submission.

Collectively, the pair have tasted defeat 14 times – with Oliveira having the lion's share with eight losses to his name. 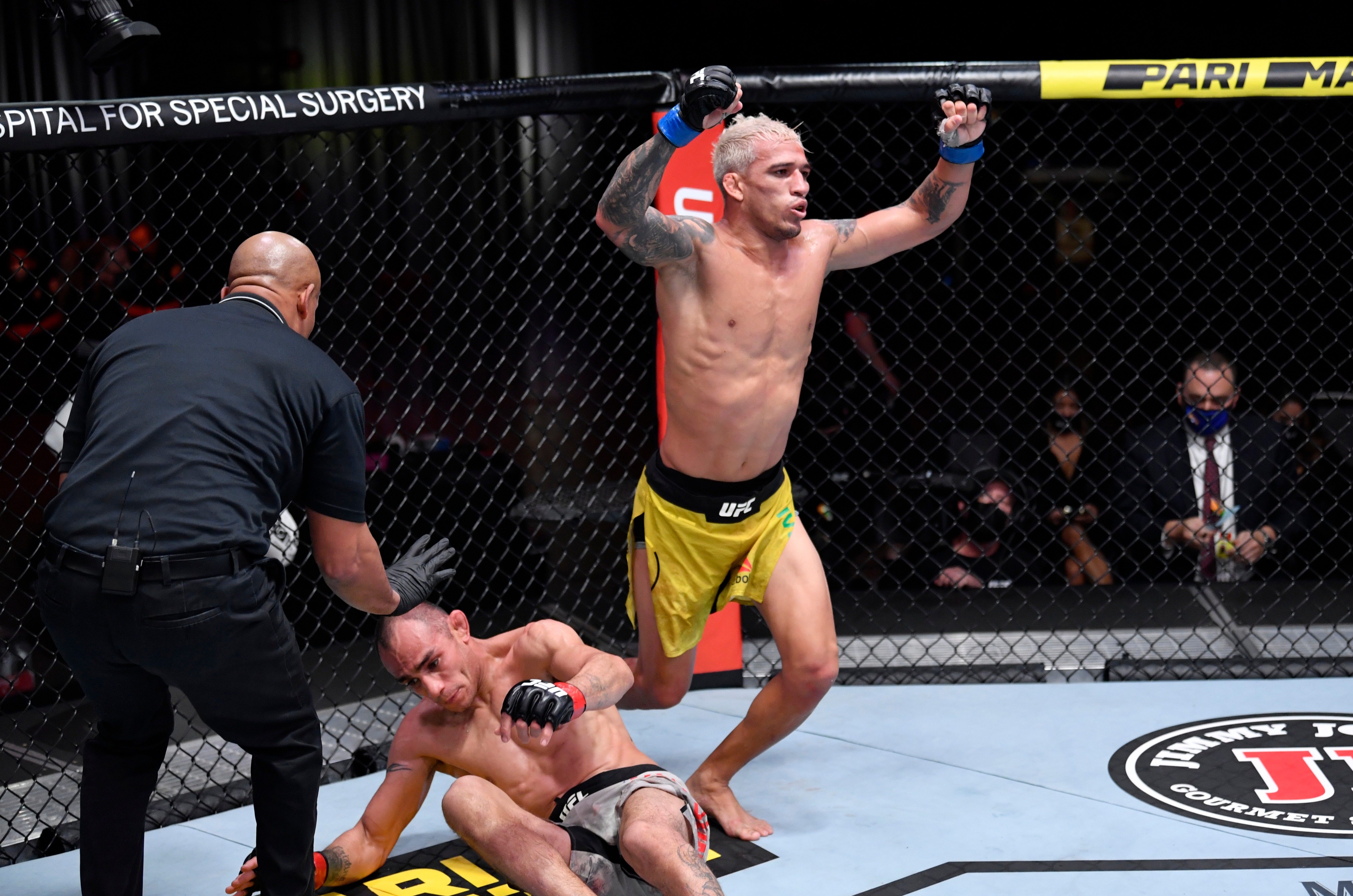 Oliveira is flying high on an impressive eight-fight win streak, which stretches back three years.

The Sao Paulo native has come on leaps and bounds during his recent tear, showcasing ever-improving striking and a fearlessness that eluded him early in his UFC career.

Chandler, meanwhile, has won his last three on the bounce – with his last defeat coming at the hands of Patricio Pitbull in May 2019.

The Missouri mauler is 6-2 in his last eight fights.