UFC star Julija Stoliarenko shockingly collapsed TWICE during her weigh-in for her bout against Julia Avila.

The Lithuanian fighter, 27, fell backwards off the scales in Las Vegas after reportedly suffering a seizure. 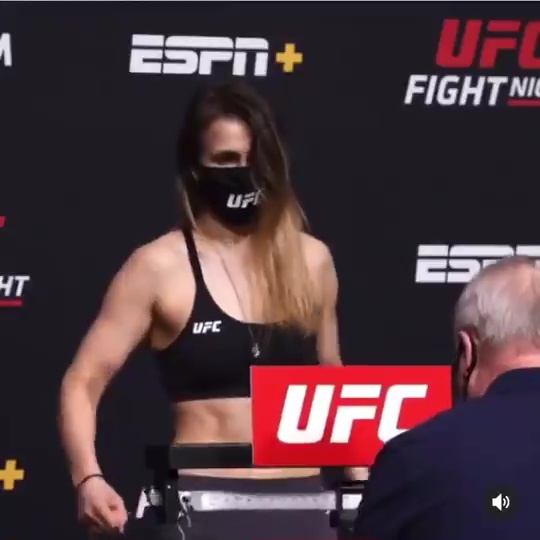 Dana White's company have since cancelled the fight 'due to weight cutting issues'.

Avila later wrote on Instagram: "Unfortunately, my fight has been cancelled. My opponent fainted twice on the scales.

"I hope nothing but a speedy recovery for Julia Stoliarenko and prayers for her.

"Maybe we can meet up at a future date. But I will not be performing tomorrow night."

Stoliarenko was set to take on Avila as one of the preliminary fights on a card headlined by middleweights Derek Brunson and Kevin Holland.

She first lost her balance and fell back off the scale before UFC security brought her a chair at the corner of the stage to recover.

Stoliarenko then managed to successfully make 135½lb – inside the 136lb bantamweight limit for non-title fights.

But the 27-year-old then collapsed for again and was taken out of the venue on a stretcher after suffering a seizure, according to BBC Sport.

Stoliarenko (9-4-2) had her five-fight winning streak ended in her previous bout, her UFC debut, in a unanimous decision loss to Yana Kunitskaya.

MMA has faced criticism in the past for it's fewer weight divisions than boxing – leading to more dangerous examples of weight cutting.

Using severe dehydration tactics, such as sitting in 90-degree hot saunas and taking near-boiling baths, the sportsmen and women are able to shed pounds to allow them to compete in their chosen category.