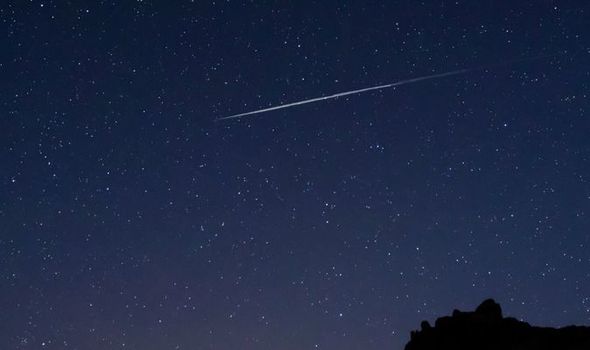 Stargazers noticed a stream of lights travelling in the skies above the UK on April 19. Theories quickly spread over social media, with some claiming it was a meteor shower, while others said it could be an alien invasion. One person wrote on Twitter: “Just went out in the garden, to take in the stars, and saw six ‘satellites’, in a row, a fairly equal distance apart, moving north.

“Wasn’t planes, cos a blinky light jumbo flow under them, and it was lower and slower. Wasn’t meteors, cos they don’t travel in a convoy…. #UFOs.”

Another person wrote: “Anybody know what the long chain of satellites going through the British sky right now are? Must be 50 of them so far?”

However, it turns out that the lights were SpaceX’s Starlink satellites, of which there are 360 in orbit.

Starlink is SpaceX’s ambitious yet controversial plans to launch 12,000 satellites into Earth’s orbit, with the aim being to supply internet to every corner of the globe.

The first of the 12,000 satellites were launched in May 2019, and month by month Elon Musk’s firm has steadily been increasing its numbers in the skies.

The plans were met with criticism from astronomers, who claimed satellite constellations were obscuring the view of the cosmos.

Despite conceding Mr Musk’s Starlink project came with “good intentions”, astronomers are concerned about how it will affect their understanding of the universe and what it contains.

Last year, the International Astronomical Union (IAU) said in a statement: “The scientific concerns are twofold.

“Firstly, the surfaces of these satellites are often made of highly reflective metal, and reflections from the Sun in the hours after sunset and before sunrise make them appear as slow-moving dots in the night sky.

“Although most of these reflections may be so faint that they are hard to pick out with the naked eye, they can be detrimental to the sensitive capabilities of large ground-based astronomical telescopes, including the extreme wide-angle survey telescopes currently under construction.

“Recent advances in radio astronomy, such as producing the first image of a black hole or understanding more about the formation of planetary systems, were only possible through concerted efforts in safeguarding the radio sky from interference.”