Power giant Origin Energy has warned sky-high energy costs could sink small electricity retailers as blue-collar unions set the scene for a clash with the government by calling for a new tax on gas exporters ahead of a crisis meeting of ministers on Wednesday.

Origin chief executive Frank Calabria said a shortage of coal and recent outages at coal-fired power stations were increasing demand for gas to fill the gap, driving up wholesale electricity and gas prices across the eastern seaboard. 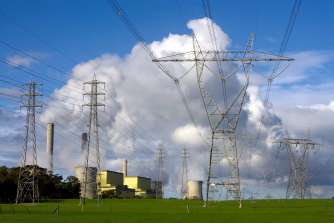 State and federal ministers will hold an emergency meeting on Wednesday to tackle surging power prices.Credit:Fairfax

Local issues have been compounded by record global prices as energy companies worldwide scramble to reduce their reliance on Russia to starve Moscow of the revenue it needs to fund its invasion of Ukraine.

Wholesale power prices topped $400 a megawatt hour across the east-coast energy grid last week compared to an average of $70 last year, while wholesale gas prices have more than tripled from $10 a gigajoule to between $30 and $50 in recent weeks.

“The risk is very high that small, exposed retailers will go under as they grapple with the significant increase in wholesale prices this year, just as we saw in the United Kingdom,” Calabria told the Australian Energy Week conference in Melbourne on Tuesday.

He said government and regulators needed to keep helping the industry increase coal supply to power stations to ease prices – such as by opening more rail line slots – while the sector must continue to “lean in” to the renewable energy transition.

“The technological, economic, social and environmental factors driving the transition are unstoppable forces and the advantages for customers and society over time are many,” he said.

Calabria and other industry chiefs said government should drive reforms to boost investment in energy projects that were vital to the clean energy transition.

State and federal energy ministers will convene at an emergency meeting on Wednesday to discuss a “capacity market”, which would force retailers to pay generators to invest in power projects that could quickly be called on when the wind wasn’t blowing and the sun wasn’t shining.

EnergyAustralia chief executive Mark Collette said he wanted “energy ministers to work with the Energy Security Board to bring that mechanism to life”.

“It’s fundamentally about the new capacity required to get the new system working before we close the old system,” Collette said.

Australian Workers’ Union national secretary Dan Walton called for the government to impose a tax on the big margins gas companies were earning from their exports into the global market, warning manufacturing jobs were at risk as industrial plants struggled to cope with soaring gas prices.

Walton said the threat of a tax might motivate exporters to open up more supply to the local market or, if not, the revenue from the tax could be used to support energy users facing high prices.

“We have to move to some big significant points of leverage against gas companies and the single biggest example is a windfall tax,” Walton said. “We are at that point where we have to drag them kicking and screaming, we don’t have a choice.”

But Treasurer Jim Chalmers ruled out imposing a windfall tax on Tuesday. Referring to British Prime Minister Boris Johnson’s move to tax the rising profits of fossil fuel exporters, Chalmers said “those proposals you have seen in the UK and elsewhere are not part of something we are progressing”.

Australia Petroleum Production and Exploration Association acting chief executive Damian Dwyer said coal-fired power station outages were to blame for the crisis and the gas industry already paid over $5 billion a year to governments of all levels.

“We are doing our bit and we want other parts of the system to do so as well.”

But Grattan Institute energy director Tony Wood said a windfall tax could be used as a lever to drive gas exporters to offer greater concessions to the local market.

Government should follow through if they don’t play ball, he said, arguing Labor could even ramp up the petroleum resources rent tax if the windfall tax didn’t deliver results.

“The threat [from the government] should be ‘if you don’t fix this situation we will introduce a windfall tax or dramatically change the resource rent tax. And it shouldn’t be an idle threat’,” Wood said. “If companies know government is taking action that they won’t like, they should be prepared to give up some of their gas.”

Wood said the revenue from a windfall tax should be spent on price relief for gas users, low emissions technology and general budget repair.

Cut through the noise of federal politics with news, views and expert analysis from Jacqueline Maley. Subscribers can sign up to our weekly Inside Politics newsletter here.