The union representing aged care workers has called for a national pay audit in the sector after the second major retirement home operator in as many weeks confessed to underpaying workers more than $1 million.

More than 2100 workers at BaptistCare, which has annual revenue of $295 million, missed out on $1.27 million in annual leave they should have received over six years to 2018. The Fair Work Ombudsman last week revealed another operator, Uniting, underpaid 9516 staff $3.36 million. 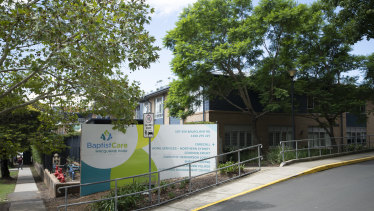 The underpaid workers have been reimbursed and BaptistCare agreed to pay a $40,000 penalty.Credit:Wolter Peeters

Health Services Union national president Gerard Hayes said the disclosures from sophisticated employers suggested issues could be widespread in an industry where staff were struggling with the coronavirus pandemic.

"Two big players like this have identified serious issues for people who aren't on a lot of money," Mr Hayes said. "This is enough for the Fair Work ombudsman to go for a large-scale audit in aged care to see if people are being paid appropriately."

Industrial Relations Minister and Attorney-General Christian Porter said the ombudsman would independently determine whether the industry deserved a dedicated audit and "no doubt it will be carefully considering that option". While the government had increased the ombudsman's budget and upped penalties, "there is certainly more to be done to ensure all employers are getting the message", he said.

A spokesman for Fair Work ombudsman Sandra Parker, whose office has run campaigns on underpayment in sectors including hospitality and agriculture, declined to comment on the union's call.

In a statement, BaptistCare said it had overpaid workers $1.37 million in annual leave over the same period as the underpayments, which relate to its NSW and ACT businesses. The underpaid workers have been reimbursed and BaptistCare agreed to pay a $40,000 penalty. It said it would not recoup the overpayments.

"BaptistCare sincerely apologises for this unintentional oversight and remains committed to ensuring our people receive their correct entitlements at all times," a spokeswoman said.

Industry group Leading Age Services' chief executive Sean Rooney did not endorse the union's call for an audit, saying pay rules were complex, but said he supported the full and fair pay of workers.

"Individual aged care providers should, as a matter of process, have checks and balances in place to ensure their staff are paid accurately," Mr Rooney said.

On Tuesday, the Fair Work Commission, which is the nation's industrial tribunal, cruelled union's hopes of extending paid pandemic leave, which lets workers without sick leave such as casuals take time off without jeopardising their income, to ambulance and disability and community support workers.

Five commissioners said there was not enough information the sectors were at a higher risk and noted the Morrison government had rolled out a $1500 payment for people who had to self-isolate without sick leave.

Unions have another opportunity to give evidence before the commissioners make a final decision, which Australian Council of Trade Unions secretary Sally McManus welcomed. "But to protect all workers and limit the spread of the virus, the federal government must step in to provide paid pandemic leave that is as simple and easy to access as sick leave," she said.

The most important news, analysis and insights delivered to your inbox at the start and end of each day. Sign up to The Sydney Morning Herald’s newsletter here and The Age’s newsletter here.